SAP TechEd runs from midday on the Monday to Midday on the Friday, though a lot of people go home early on Friday i.e. before any of the sessions because the parties have run out. Thus it sucks to be a presenter on the Friday. It does mean, as I have discovered, if you do a hands on session on the Friday, you do not have to share with anybody.

I went on holiday for a month directly after TechEd, so these blogs are getting published a while after the event, but even in this break neck world, I don’t think everything will be out of date after four weeks…

I made a whole bunch of notes about every day, so I will split the blogs about this event into five, one for each day. I will try to avoid mentioning dustbins, free drink events or meeting celebrities and the like as I am presuming people are more interested in what I learnt at TechEd that could help them in their jobs, as opposed to what a good time I had. 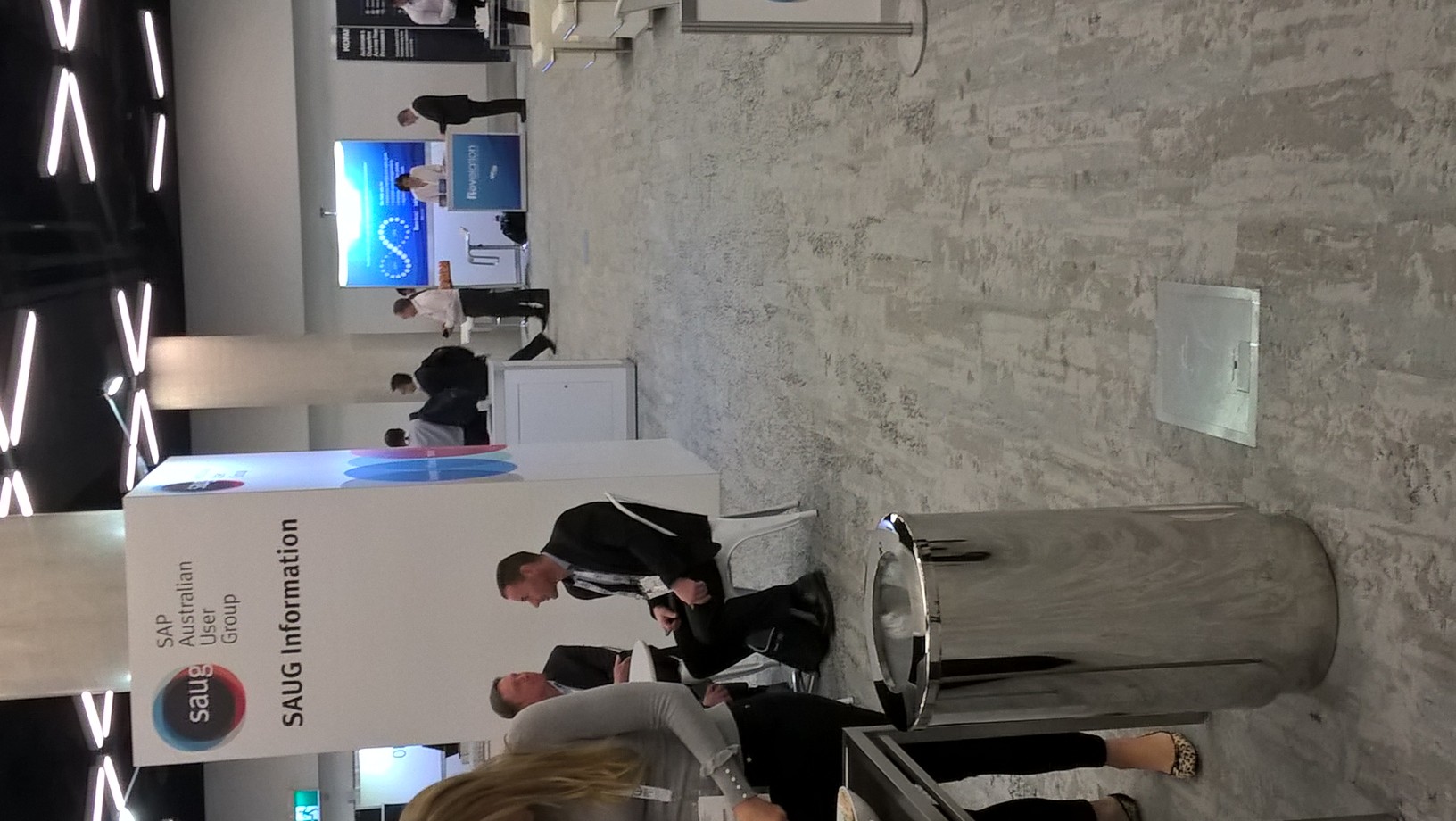 In any event, on the Monday things kicked off at Midday with the “Big Data Event”. It was very well attended, a huge room full of people. Thus comprises assorted people from SAP in New York (including CEO Bill McDermott) talking about a new SAP product, followed by a few live speeches from people in Las Vegas.

Whilst we were all sitting there, waiting for the feed from New York to start, you had adverts from SAP cycling through the screens. You end up looking at them just because they are there. This year they were all about “Leonardo”. So the very first note I wrote was “Is Leonardo an actual product, or rather an abstract concept?”

On the last night a lady asked Graham Robinson what Leonardo was and he said it does not exist, if he cannot touch it and feel it, it is not there. I was very happy someone I respect was thinking along the same lines I was – many years back I felt the same way about the word “Netweaver” and even before that many Microsoft developers felt the same way about the term “DOT NET” – one wrote at the time “it is not that what is there is bad, the problem is that there is nothing there at all”.

So, this was before anyone had said a word. Then the live feed started and a guy who I think was the head of sales for SAP or something, turned out to be an excellent interviewer and he was good at public speaking AND he had an English accent, so all green ticks as far as I am concerned.

Bill McDermott was first. He did not say directly the new product SAP was releasing, he was saving that for someone else, but he did say a lot of buzzwords, and I will list them below. At the mention of each one the audience did a Mexican Wave and shouted out “Oh No! Not a XXXX” where XXXX represents the buzzword.

This is like the film “Monsters vs Aliens” where the woman, Susan gets blown up into a giant, and one of the monsters asks her what her monster name is and she says Susan, and he says you can’t say “Oh No! Here comes Susan!” it has to be something like “Oh No! Here comes Gargantua!”

That is why buzzwords are so important. You cannot say “Oh No! It’s a Business Problem!” though I suppose you could if you wanted, but how much better if it’s a meaningless noise term like “Sonic Oscillator” or “Paradigm Shift”.

BMD buzzwords I noted, in order of occurrence:-

He did not mention the phrase “One Million Tons of Bananas” which was bit of a disappointment, but you cannot have everything in life.

In the defence of “massive hockey stick” this is a reference to the normal development “s curve” where a new technology starts slowly and then jumps up dramatically in a very short time and then tails off again only getting better very slowly. It has been said that with AI the development will look more like a hockey stick with things starting slowly and then shooting up forever with no tail off.

The question came up about his experience with his recent near fatal accident, and he noted that in Israel all the of health service runs on SAP (so presumably he thinks it’s good) but in the USA there are half a billion disparate systems all not talking to each other so no matter how good the doctor or surgeon is they do not get the information they need. As might be imagined, having seen this first hand, from a patients perspective, and being in a position to do something about what he sees as a terrible situation, he has set SAP on a path to try and fix things up.

It also transpired that on the actual day this “Big Data” event was occurring SAP had finalised the acquisition of a company called “American Gigolo” which is nothing to with health care, or the IOT, but rather identity management (I think). This is where you have your user account in twenty different systems, all with a different job title, and every other fact about you, and someone needs to synchronise this manually, if they can be bothered. In this case I presume the software is supposed to help this situation as opposed to encouraging it.

Next on stage (in New York, where you could see the back of the heads of various audience members, to make it more real I imagine, and they kept standing up) was Mr. Data who then talked about the new product namely the “SAP DATA HUB”.

Before I go on, here were the buzzwords used:-

Now we have that out of the way, the problem as stated was that generally companies only make use of 0.05% of the data they have collected, when it comes to making decisions.

This is because data is coming from all over the place nowadays, like the IOT (buzz) and Social Media (buzz) and other forms of Unstructured Data (buzz). All jokes aside, I have encountered that problem first hand, where a company sucks in a vast amount of data about real time engine behaviour of the truck fleet and then does not know what to do with it. I would say that is better than not having the data, as one day you will decide what to use it for.

Now, I may have got this wrong, but here is how the SAP Data Hub addresses this problem:-

Next was the time for a demo to see this in action, using the example of joggers having devices on their wrists which gave you real time information and then you mix this with master data from your ERP or BW system. The next day Ian Kimble was it give the exact same demo and got the audience to go wild, but this time half the audience walked out, which must have upset the original presenter somewhat.

As I was writing this, I just ordered another beer, and the barman in the Double Helix bar in the hotel where TechEd was held (Venetian) remembered me from two years before when I was writing my notes in the exact same spot as I am now.

Getting back on track next on the agenda was the ever popular customer testimonials, where out come the stools, and various pilot SAP customers are wheeled out to say how great the (insert latest thing) is and how it has changed their lives forever. I don’t think this fools anyone and we had another 50% walkout of the remaining audience.

Even use of some buzzwords like DATA JANITOR couldn’t seem to stop the haemorrhaging of the audience.

The speakers then switched over from New York to Las Vegas. It was all good at the start with the talk about how it is predicted that in 2018 that 75% of development activity will include AI, and by 2019 natural language interpretation as well. I personally think this is quite likely though there is a lag between development activity and seeing results,

Then it seemed that each new person on the stage was saying the exact same thing, causing the remaining audience to slowly drain away.

For me the crux point came when a lady gave a 15 minute speech and then said she was going to talk about something else, but which was quite clearly the exact same slides in a slightly different order, with the commentary for each slide being pretty much word for word. At that point I lost the will to live and had to bail out. 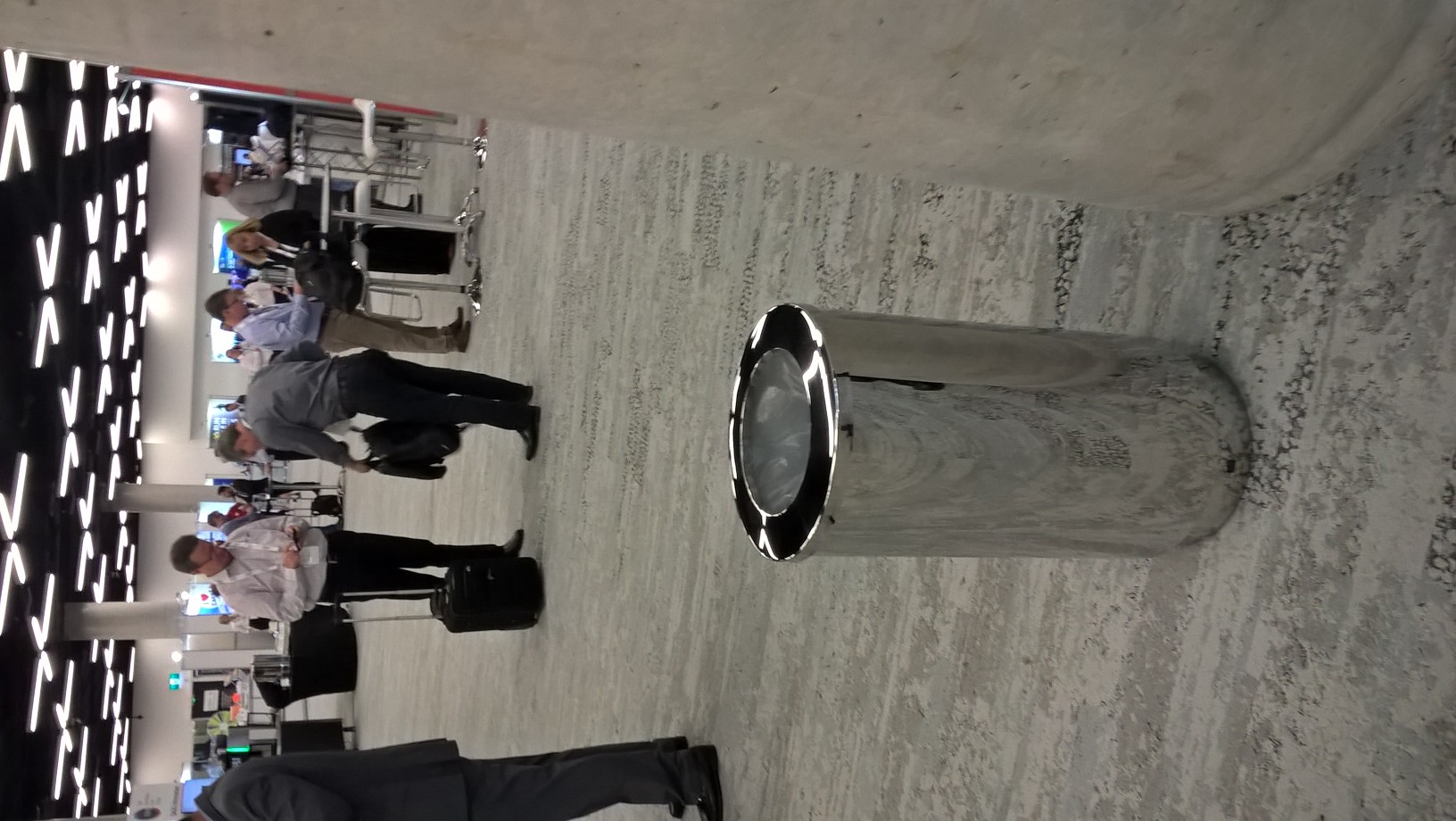 A little later there was a media briefing where assorted journalists (and Mentors) could ask SAP executives difficult questions.

I asked about the apparent (to me) disparity between the former approach of moving data from assorted different systems to a data warehouse (i.e. BW) before running queries on that data, and the new approach of keeping the data in the source system. I asked if the new approach was only for IOT type data (where you have so much you probably do not want it bloating your ERP system) or also for the traditional transactional data from SAP ERP and other linked systems we have replicated in BW.

The answer was that you still needed an ETL process of some sort of ETL process to cleanse and normalise the data before it gets processed by some sort of query. I can see the logic of that, but I think that was an answer to a different question than the one I asked. 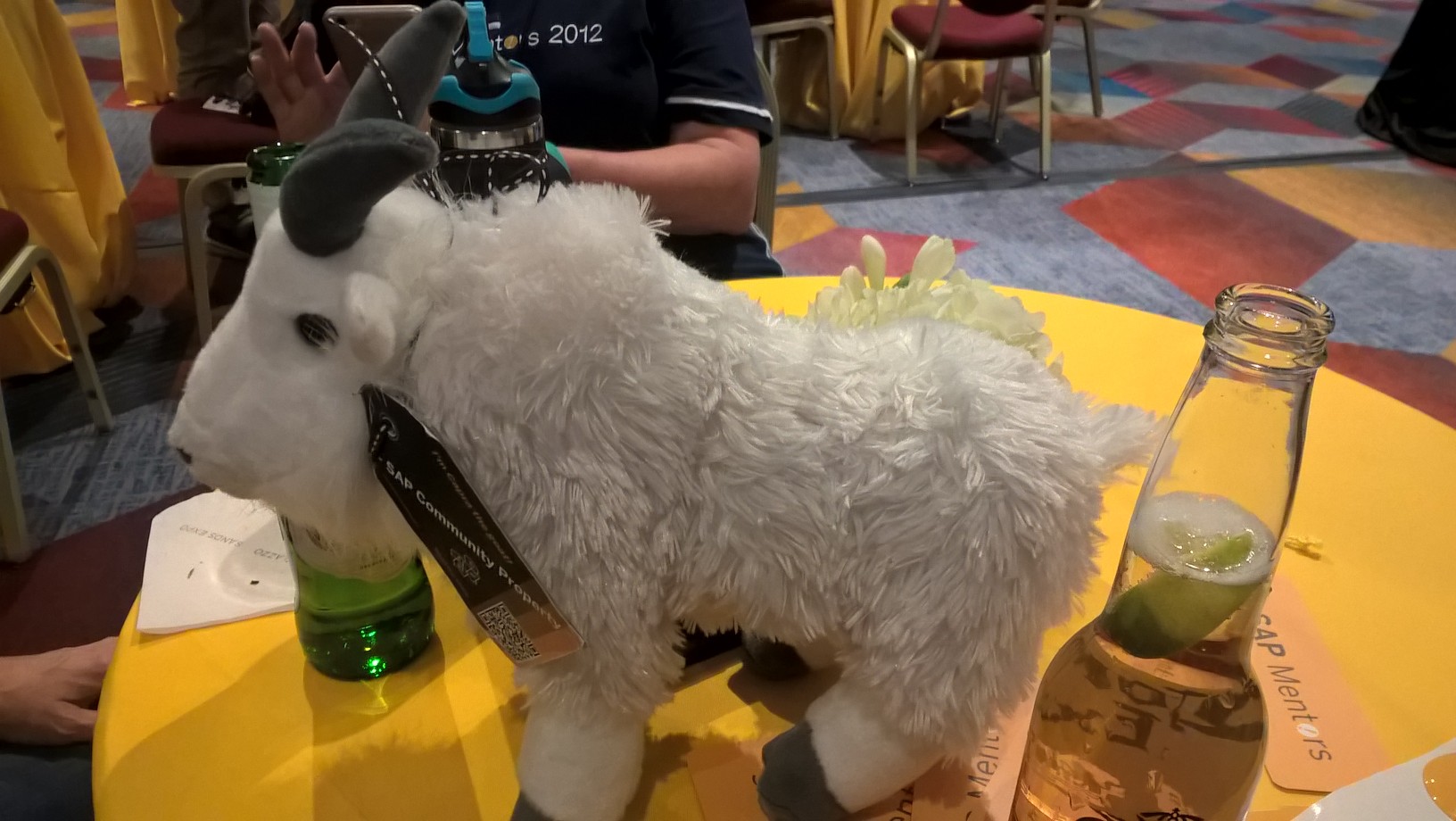 Next was the drinking. As I was speaking at this event first off was a drinking session for the speakers. It is always good to meet people in person who you have ever only heard of via the internet and this year I got to talk to Karl Kessler who is sort of the “Stevie Winwood” of ABAP programming at SAP, and who writes the “Under Development” section of the SAP Insider magazine.

Next was a drinking event for the SAP Mentors. There are two vitally important points to make here. First was that Capra the Goat was present, secondly that each Mentor (or possibly only the new ones) had to sing a song, or at least a few lines of one. I choose “The Laughing Gnome” by David Bowie. If I was Stevie Winwood I would have sang that I was back in the high life again, all the doors now closed to me, will open up again. 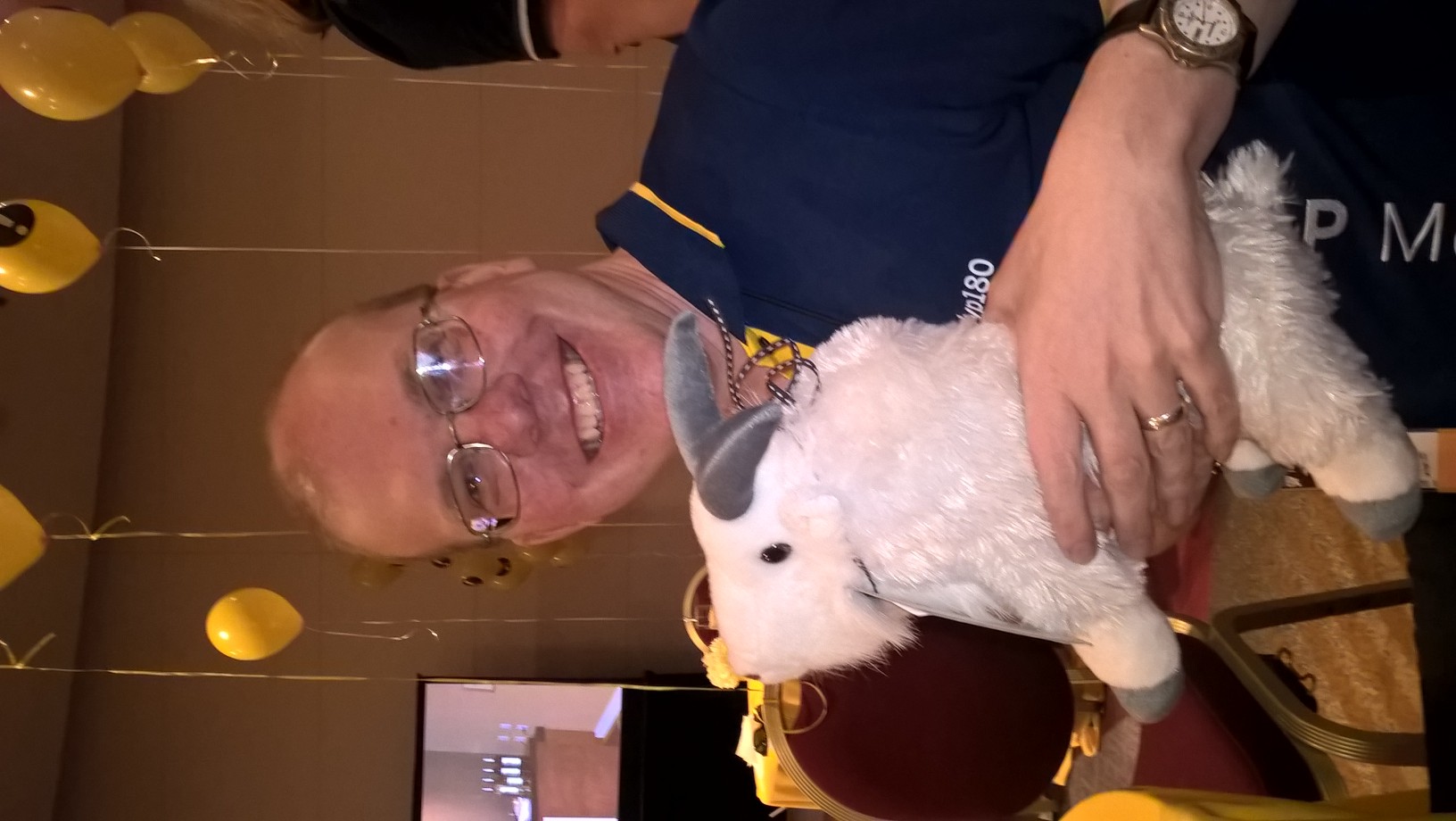 In the next exciting instalment will be the events from day two (Tuesday). Other people have already blogged about this, but there is so much information flooding in from TechEd you need multiple blogs to try and absorb it all.