We [Makara & Luiz] are Master students of Business (Enterprise Resource Planning System) at Victoria University (Sydney campus). This is a storytelling which is done to partially fulfil the course requirements for ‘Business Analytics’ through the utilisation of SAP BusinessObject Lumira. We would like to extend our great appreciation to our tutor, Mr. Parves Ahmed, who has relentlessly spent his time and efforts to guide and tutoring various modules of ‘Business Analytics’, especially SAP BusinessObject Lumira, which we have utilised in visualising the data about domestic violence in Australia in this study report. We expect to produce other report articles employing other SAP analytical tools for our future posts so that we can contribute our knowledge and research in this field to SAP Community and get feedback to develop and enhance our profession in Enterprise Resource Planning, especially SAP BusinessObjects.

Women have been suffered from various exploitation throughout the world regardless of their nationality. In this regard, domestic violence is closely followed by the Australian government as the security of the people is one of the main priorities for the top country leaders. Every registered incident is recorded, classified and analysed by the Australian Bureau of Statistics (ABS) to provide knowledge in order to fight the issues and deliver a proper response. Furthermore, all this data is available to the public to understand the real problems faced by the country and to analyse by themselves.

This paper aims to show a different point of view quantitatively based on the data available by the ABS and expose a story that brings to light a more specific issue about women victims of domestic violence. Victims are the focal point in this report and the kind of crimes suffered, location, their gender and age are the main points to define the level of risk of each group who suffer more from domestic violence.

The visualisations in this paper are conducted through SAP BusinessObject Lumira, which is being taught at Victoria University Sydney under the Business Analytics unit. Lumira has helped us improve extensively in visualizing data from various dimensions. We can visualize number of different dimensions from various data sources. We can categorize and set hierarchy of the data according to its level (e.g. country, state, city, etc.). As a multi-dimensional visualization tool, SAP Lumira is an important tool, which allow users to tell the story from their available data and provide cautious notice to its respective units of the organisation and/or entity.

Victims of Domestic Violence in Australia 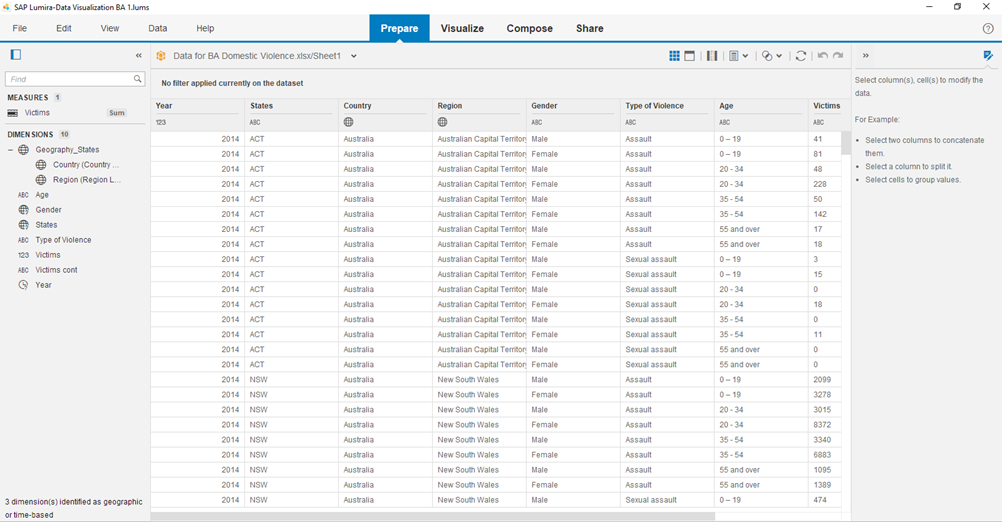 We gather the data from various sources and compose them into a single excel file. Then we uploaded the data into SAP Lumira for visualizing the information we have that is related to domestic violence throughout Australia. In the visualization, we have various dimensions to be included such as geographical location, year of occurrence, gender, types of violence, age group, and number of victims.

The first insight found in the data analysis was that when the incidents are classified by state the number of incidents follow closely the population of each state. 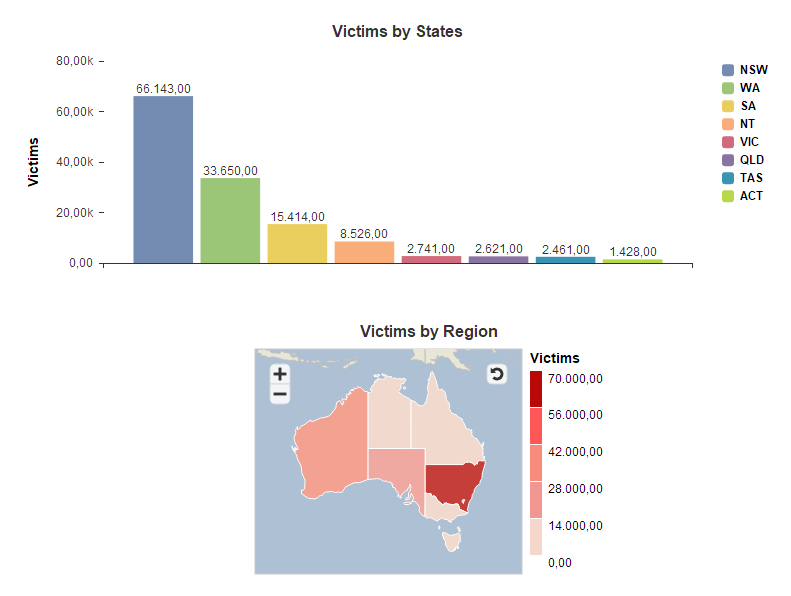 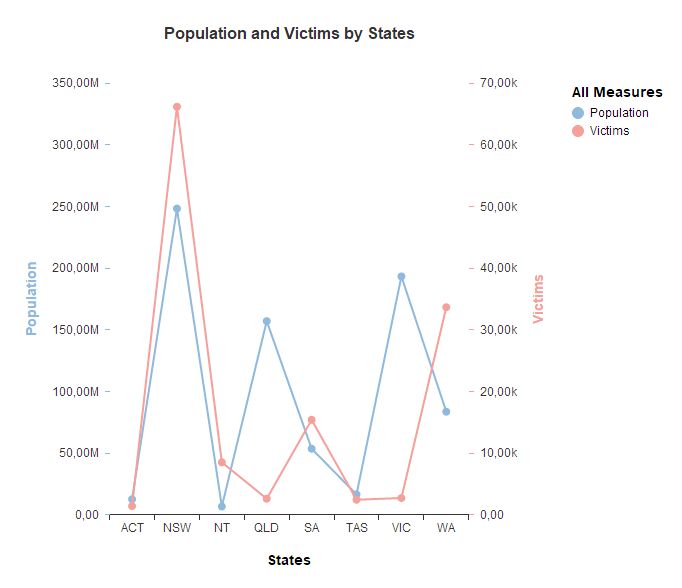 Figure 3: Relationship between Population and Victims by State 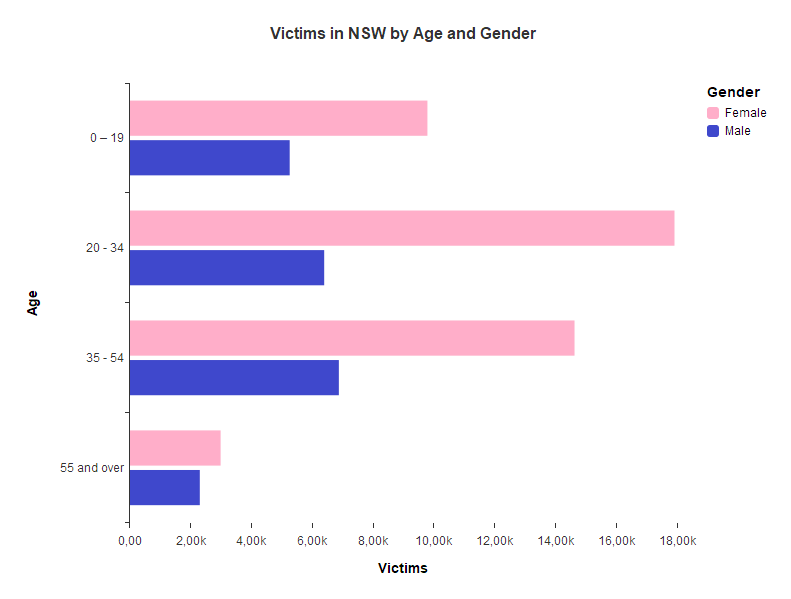 Figure 4: Victims in NSW by Age and Gender

Gender of victims plays another important role in the data analysis. By analysing gender of the victims in NSW, which is the most important area in number of occurrences, it is possible to understand that women appear to be the most vulnerable group in all age ranges, while female in the age group of 20 to 34 has the highest proportion comparing to other age groups (Figure 4).

The increment of occurrences between 2014 and 2015 is also different when the gender is analysed. The following graphic shows that the number of female victims tend to increase in a different trend in comparison with the men group. With the two years of study, female has been suffered by domestic violence more than men with a rapidly increase in number of incidents occurred (Visualisation 3). 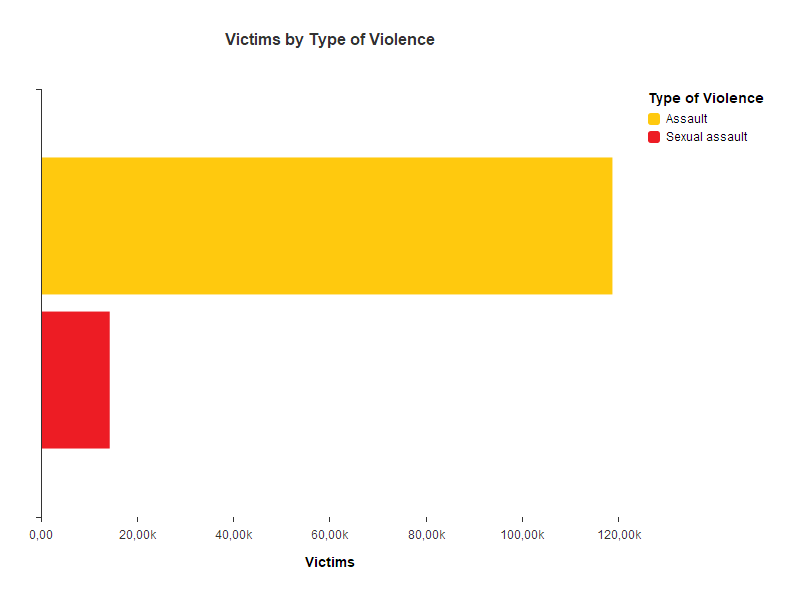 Figure 6: Victims by Types of Violence

Another fact that could be predicted was that after classifying the incidents in two groups, assault and sexual assault, the former has a remarkably difference in number of occurrences. Therefore, as mentioned in the previous section, it is possible to predict that women are the most vulnerable group in every kind of crime (Figure 6). 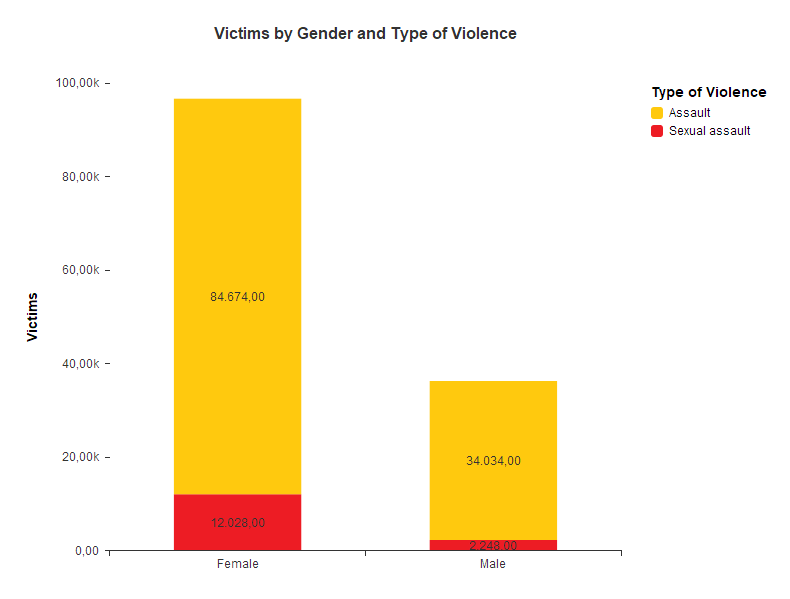 Figure 7: Victims by Gender and Type of Violence

When gender is analysed with types of crime, the prediction is confirmed. Gender plays an important role to ensure that women are the main victims of every type of crime. However, there is something interesting that can be observed. By specifically analysing the sexual assaults it is possible to identify an enormous difference between the two groups. The number of female victims of sexual assault is 6 times bigger in comparison to the number of male victims (Figure 7). 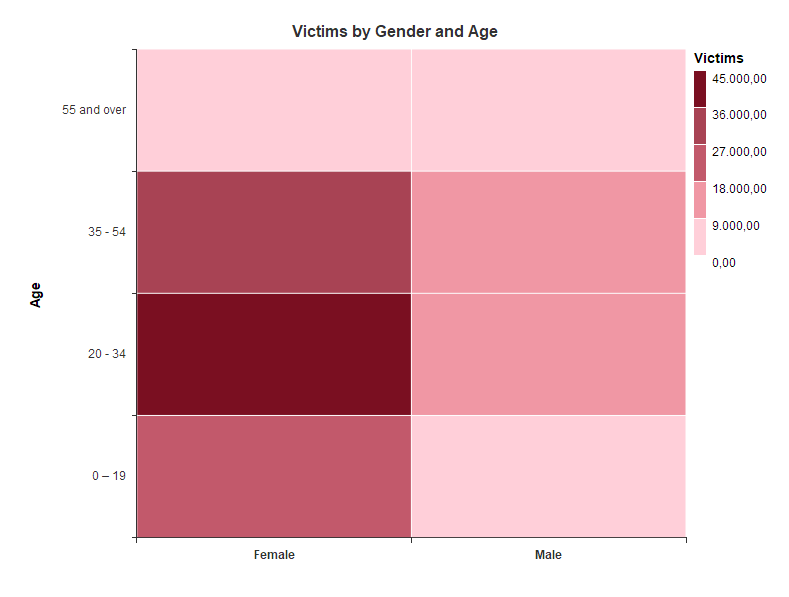 Figure 8: Victims by Gender and Age 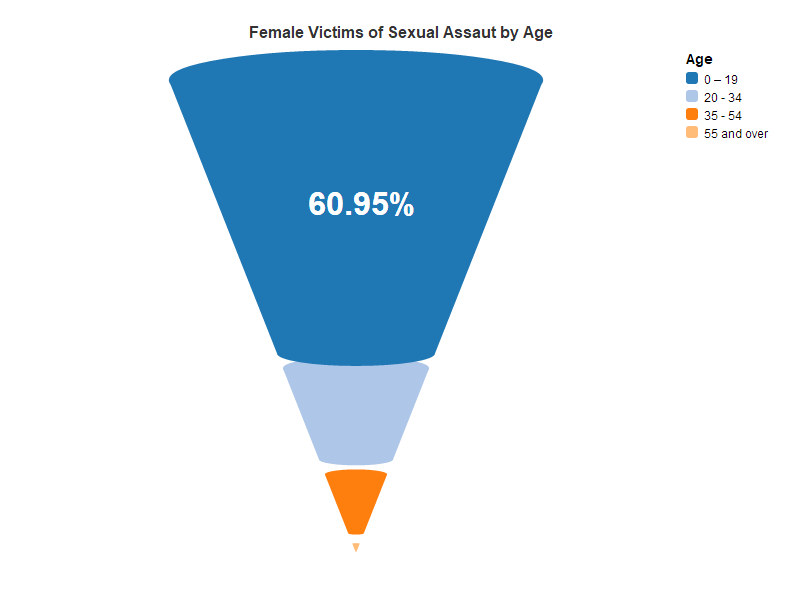 On the other hand, when the crime that more affects women in proportion, which is the sexual assault, is analysed, it is possible to identify that the age group changes. In fact, it is likely that sexual assaults have as main victims a younger group. The group of female victims between 0 and 19 years old is the most affected by this kind of crime. Therefore, it is possible to state that children or young women are the most vulnerable group in sexual assaults, suffering in more than 60% of the cases (Figure 9).

All in all, after the analysis of the available data, it was possible to understand how big the security issue is for the female group. The visualizations we have in this paper show that female are the most vulnerable group suffered from domestic violence throughout Australia. Another dimension is that New South Wales, which is the most populated state, has the highest rate of domestic violence with the rate of female victims is also the highest among all other states. It is possible to understand that sexual assaults’ main target is women; while the younger the victim is, the more likely this kind of crime is to occur. It is an important statement that sexual assaults are so dangerous to children and the parents, government and society should have this in mind in order to address the issue and fight this trend. Domestic violence, in general, has been affected people from all over the world, not limited to the quality and/or standard of living of the country. Therefore, we, altogether, should take a larger step to stop domestic violence, especially violence against women. She might be your mother, your grandmother, your sister, your daughter, or other close friends or relative of yours. Protect the women from domestic violence, protecting your society. Together we stop domestic violence against women.

Nice Job!!!   These statistics are not good.   The graphs give a really good visualization of the problem.

As I read this, it makes me wonder if SAP BusinessObject Lumira can be connected directly to a data source or sources.    That way it could automatically pull in the data from the ABS or other databases.   I've never worked with it - so my technical mind is just curious.