Enterprise is the new Black – revisited

Sitting on the train back from the CF Summit in Basel I conclude it has been a great week overall and with this blog post I want to share my very own impressions with you.

It’s been nice to mingle with peers and influencers outside of my primary home court: SAP land, yet, is there still such a thing? Or are ecosystems blending given everybody is impacted by the ripple effect labeled ‘digital transformation‘?

According to the numbers Abby Kearns presented the break down of the Cloud Foundry community spans across the entire spectrum: from SMB (39%) up to large enterprises accounting for more than 40%. And I think that may be the one qualifying characteristic of the Cloud Foundry Founation: it’s a very diverse community – on all levels. And that’s as much a strength as a challenge sometimes…

Let’s rewind to the beginning… for me, the best way to put the keynote into words would be to say “it had a little bit of everything!“.

I really liked the keynote stage setup: the purple(?) lighting on the skyline background nicely framed the conversation in an unobtrusive, yet stylish manner. Abbey walked on stage with “Who runs the world? Girls!” hereby opening up her keynote with a strong reference to diversity and women in tech . (Being a techie by trade and father of three girls this is something I root for any given day!)

The other main talking points of her intro included digital transformation, developers as kingmakers among other things. Yet, the main topic that was discussed most afterwards was arguably the new line-up featuring  application runtime and container runtime (more on that later-on). 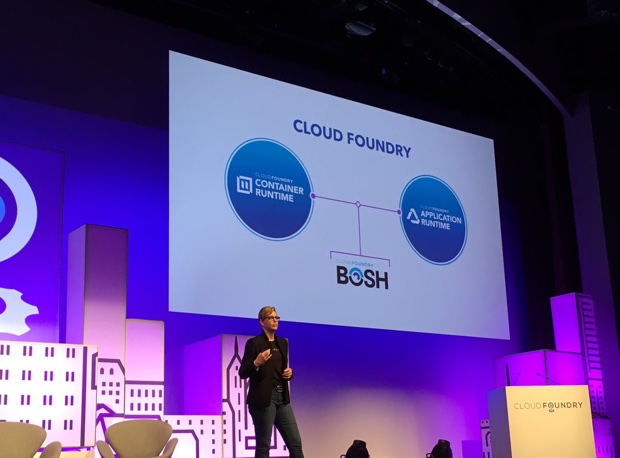 Her first guest on stage was Sarah Notovny (Head of Open Source Strategy for Google Cloud Platform), to exchange views on Cloud Foundry, Kubernetes and Kubo in particular. Next was a joint showcase by Dr. Häberli (CTO, Dormakaba) and Marcel Walker (Head of Network & Cloud, Swisscom) sort of representing the executives in the community. Our own Marc Geall (SVP, SAP Cloud Platform Partner Innovations) explained SAP’s strategy and its focus on co-innovation with our partner network around Cloud Foundry.

“Open-source allows us to build better software for our customers…”

(Sure, would have been good to hear the Beastie Boys on stage again, but let’s not go there…)

The remaining cast invited on stage reflected the broad variety of community members and influcencers and featured a variety of common genres: roundtable discussions (Sarah Heldt, Denis Kostic and Simon Neusser; all from Allianz), success stories (via Mark Thienpont, Delaware Consulting), tech talk (Julian Fischer, anynines) and a closing panel with Michael Miller and Thomas Di Giacomo (both from SUSE) being interviewed by Frederic Lardinois from TechCrunch.

From there, people were heading to the educational sessions of their choice. With a broad variety of tracks and topics there was no shortage on interesting and highly relvant content plus the opportunity of (re-)connecting with the who’s who in the community.

As cho-chair of the “Cloud Foundry at Scale” track (together with Julian Fischer) I simply have to plug ‘our‘ content at least briefly, so here’s sort of a “word from our sponsors“. Nope! As explicitly mentioned during the track opening: it may be a sponsored track, yet we selected the content based on what matters most to the community in context of taking Cloud Foundry to the next level. Given SAP’s engagement in open-source projects within the Cloud Foundry space this was the default type of session on SAP’s part of the agenda. For more details please refer to this recent blog post.

As always I wasn’t able to attend as many sessions as I had hoped for (fortunately they all get recorded!), but spending most of my time engaged in worthwhile discussions with customers, partners, analysts, press and colleagues. This setup certainly qualifies as my ‘natural habitat‘ and having my evangelist hat one it was all I could have asked for! Especially in context of this recent article: What exactly does a product manager do all day, anyhow?

However, as stated… there was one dominating topic – application & container runtime – with multi-cloud as a flavour-adding side-dish. With people such as James Governor from RedMonk and Frederic Lardinois from TechCrunch summarising the key plot more eloquently than I ever could, I simply refer to their respective pieces and just provide my view (not to be mistaken as the official SAP view) on the matter.

First, it’s good to finally seeing the topic being brought up as priority topic openly now. That helps – especially with so many stakeholders camping on both sides. So, good to see this happening! I also think that the re-branding to application & container runtime was a smart move as it helps to articulate the distinct nuances being reflected in their designated use-cases as a joint setup.

Based on the public dialogue & back-channel conversations I believe that a joint effort is needed to come up with a solid approach of bringing these two worlds together in a complimentary fashion. What I’m not 100% sure of yet though if Kubo is the only way to achieve this. There are alternatives and given its importance we need to get the majority vote of the CFF members to ensure a common direction. With so much attention on the topic this certainly is an area to watch!

With that in mind, it’s good that the “container runtime” was renamed to broaden the scope beyond one alternative only (Kubo).

At the end, this is exactly what an open-source foundation is good for: assembling all key players and then making a decision in best interest for all. I’m glad to know that SAP is weighing in here, but that should not surprise anyone given we are both members in the Cloud Foundry and Cloud Native Computing Foundation.

The food being served was very good; worth mentioning as this is not always the case at tech conferences. (I’m not a foodie, nor do I make pics of the food I eat, so you simply have to take my word for it!)

I also enjoyed the company at the evening reception and booth crawl. Special shout-out to my colleagues running our booth (especially Savita and Jan) for handing out the beer and demonstrating the cool Cozmo demo – which explains bi-modal IT feat. a mini fork-truck, voice input and wharehouse management on a table. Kudos to Joe are due here!

And while it got late on Wednesday some of us got up early on Thursday morning (6:15) to start the day with an easy 5k fun run along the Rhine river. As I keep noticing, there’s barely a run you regret having done afterwards and this one was no exception. Thanks for the company, to the guides, all fellow runners and last, but not least my colleagues Bernd and Marco (aka Men in Black) 😉 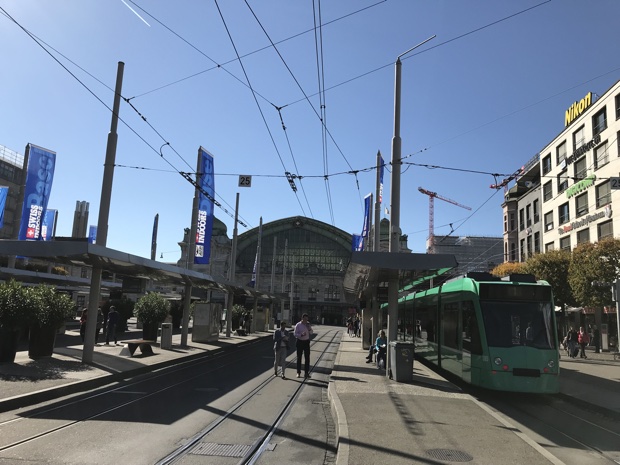 All in all, it was a great week here in Switzerland. “Basel at its finest!” including sunshine through-out the week and the stereotypical more relaxed life-style attributed to the Swiss made it a very pleasant environment to hang/geek out with similar minded. It’s been my third European Summit to attend and by definition this kind of turns it into a tradition, right?

Safe trip home everyone! I – for one – am looking forward to spending a weekend with my family and then getting back to regular (is there such a thing?) business after this series of back-to-back conferences.