Performance tests are crucial for any web or customer application. They reveal how a system behaves and responds during various situations. The system may run very fine with 1000 concurrent users but how would it behave when 100,000 users are logged on? In terms of performance, it means to achieve high speed, scalability, and stability of the system. There are different tools which gives different performance numbers to measure these Key performance indicators like Response time, CPU time, DB time etc. with respect to single user or multiple user tests.

However, just merely getting these performance numbers is not enough as it only conveys whether the current performance value indicates a good performance or bad performance. There is need of additional statistical inferences to be drawn out of these indicative numbers. The paper presented below talks about how we can draw statistical inferences, build relationships between different Key performance indicators of any web application, predict futuristic probabilities charts and conduct hypothesis tests and perform regression analysis

In today’s business world, to enhance productivity of any website system, whether it be a personal project, a business venture or otherwise, it’s critical a web application is tested for its responsiveness in terms of its stability, i.e. how well it can handle specified or expected workload. Through software performance testing, efficiency of any vital application can be measured, which would help to understand the good or bad behavior of the application [4].

Non-performant (i.e., badly performing) applications generally don’t deliver their intended benefit to an organization; they add to net cost of time and money and a loss of reputation from the application users, and therefore considered as non-reliable or loss to the organization [2]. If a software application is not delivering its intended service in a performant and highly reliable manner, this leads to detrimental effect on everyone involved with the products, right from the designers, architects, coders, testers and end users [3].

With so much essence for Performance testing, yet it continues to be pretermitted in contrast to functional tests, which are well understood and have a high maturity level in most business organizations. It is truly inconceivable that companies continue to overlook the significance of performance testing while frequently creating and deploying applications with negligible or no understanding of their performance, and eventually beleaguered with performance and scalability issues after the release. However, over course of several years this mindset has changed and organizations started caring to check for the performance behavior of their applications.

So how a good or bad performance of any website or application is judged? Ultimately it is all about perceived response, some crucial applications are expected to deliver output within thresholds of 1 second or less example, bank applications, while for others it is still okay to take a minute or less to attain to user’s request example, shopping, Facebook website. In former case, a delay of few seconds might irritate a user whereas in latter case the user does not care much about the few extra seconds or minutes spent. So precisely, a well-performing application is one that lets the end user carry out a given task without undue perceived delay or irritation. The important fact is that the performance really is in the eye of the beholder [2].

From an end user perspective, it sounds simple, however from organizations perspective which are accountable and need to take care of their applications performance, there is an exigency to translate this very fact into quantifiable output. Different organizations might invent different ways of predicting the response but use of standard Key performance indicators (KPIs) such as end to end response time, cpu time, database time, memory etc should be considered here. These KPIs are measurable and assessable and can tell whether a system or application under test is behaving good or bad by comparing it against some standard thresholds numbers. A gauge of these performance indicators would tell how well (or not) application is providing service to the end user or efficiency-oriented indicators such as throughput and capacity would measure how well (or not) an application makes use of the hosting infrastructure.

Yet these indicative numbers desert to convey the essence of the data to the end-user. The inferences, which are paramount to take important decisions such as, can the software be released to the customers or is it a better competitive product in the market or how well application would perform in near future with increasing user/data etc. are still lagging and cannot be interpreted easily. So there arises a necessity of important statistical inferences to be drawn out of these key performance indicators of test data which would help the organization to take sagacious decisions for any business.

Box plot diagram is effective to eliminate outliers from the test data. It allows to compare different categories of data for easier, effective decision-making. A key to the development of box plot is the computation of the interquartile range, IQR = Q3 – Q1.

Here, I have taken an organization test data for one product area and have recorded key performance indicators values, such as End to end performance time, CPU time and Database time for it.

Computing the five-number summary for the performance data results in:

Then calculating the Interquartile range, lower limit and upper limit:

Next is to draw the box plot diagram using the above values:

Using frequency distribution, the organizations can calculate what is the standard performance kpi (response time or cpu time) value under which most applications fall.

We can compute the frequency distribution table first and then chart as defined in below steps:

Where K= Number of Classes, log N = Logarithm of the total number of observations.

For Example: If the total number of observations is 50, the number of classes would be

Here, I have used excel functions and above steps to calculate the frequency distribution table and chart as below:

The probability distribution represents the likelihood of an event occurring in near future.

In contrast to frequency distribution where the diffusion of current data set is measured, the probability distribution table and graph conveys information about the futuristic events. [5]

Risk evaluation could be another beneficial denouement of probability distribution which would help to understand and mitigate the risk for any business.

Assuming the data is normalized, I calculated the probability chart for the performance test data set as below, using excel data analysis functions (NORM.DIST): 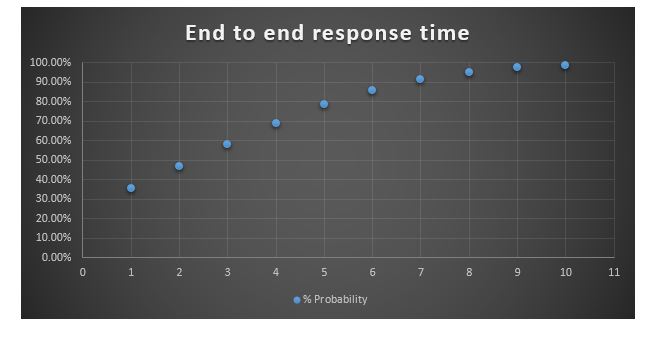 The hypothesis testing procedure uses data from a sample to test the two competing statements indicated by H0 and Ha [7]. The p-value is then calculated using mean, hypothesized mean and standard error and this p-value is compared against the alpha or the significance level using the below rule:

So as per the rule, I fail to reject null hypothesis and conclude that database time falls within threshold of 0.11 seconds for the dataset. Similarly, I made different assumption that the database time would fall within threshold of 0.08 seconds. However, this time the null hypothesis is rejected based on the below computations as p-value came out to be smaller than alpha value. This value was significant enough to reject the claim.

Here, I have applied linear regression on variables End to end response time and Database time and tried to predict the relationship between them using Excel data analysis functions:

From the analysis table above, the relationship between two variables is envisioned as:

The correctness of these coefficient values can be determined by p-value in the regression chart. The p-value of 9.17E-09 and 2.38E-19 for intercept and x-variable coefficient respectively, are extremely low and thus can be interpreted as highly accurate.

R square is the coefficient of determination which states that 76% of the variance in response time can be attributed to database time. It is a statistical measure of how close the data are to the fitted regression line.

The Anova highlights some key figures:

The F-statistics value which is very low in this case means regression analysis is good.

The residual plot and probability plot between response time and database time is plotted as below: 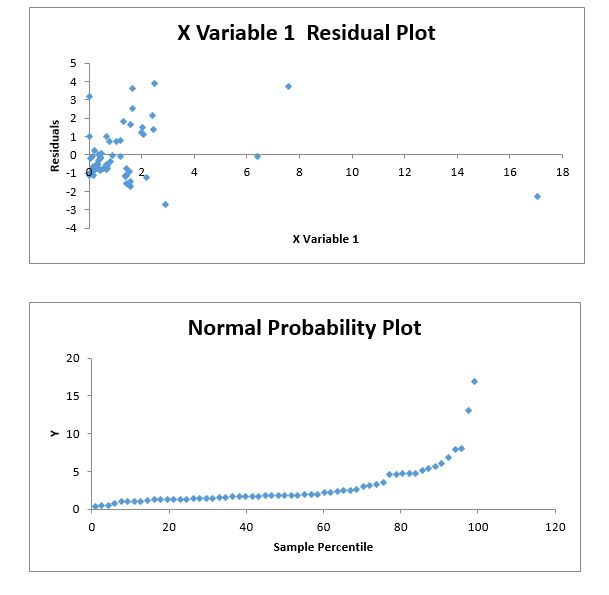 [7] Book on Statistics for Business and Economics (by Anderson, Sweeny, Williams, Camm, Cochran)