Hi folks! This is me jumping back into the SAP blog space after a while.

Quick background: after a significant amount of time spent in the BusinessObjects realm with SAP Lumira and Design Studio, I have now, since the past year, been delving into the world of SAP HANA, with the pleasure of working up, close and personally with SAP HANA, express edition (HXE)

This past year has been a wonderful learning journey for me, getting to understand better the vast world of database technology with SAP HANA. We launched SAP HANA, express edition exactly a year ago, at SAP TechEd Las Vegas 2016. Since then, working on perfecting the express edition has been an interesting and positively challenging journey! 🙂

These days, we don’t really get to see, meet or connect with our end users on a personal level anymore ~ what with all the booming technology that enables remote access and connectivity from anywhere in the world! It’s great that technology is now so accessible, but it’s even greater when you get an opportunity to see the face of your end users ~ which is precisely what TechEd gave to me ~ a space to interact face-to-face with end users!

I had the honor of being part of the App Space in the Developer Garage section of the Show Floor. The App Space was an open “come-and-try-out” space that had several machines set up with a pre-configured VM version of the HXE package (Server + Apps). Users could try out a set of prepared tutorials, complete them and win prizes. The sample tutorial flow we had prepared for users included a full-fledged sample app development workflow that had SHINE, XSA…. basically your “getting-started-with-HXE” kit. 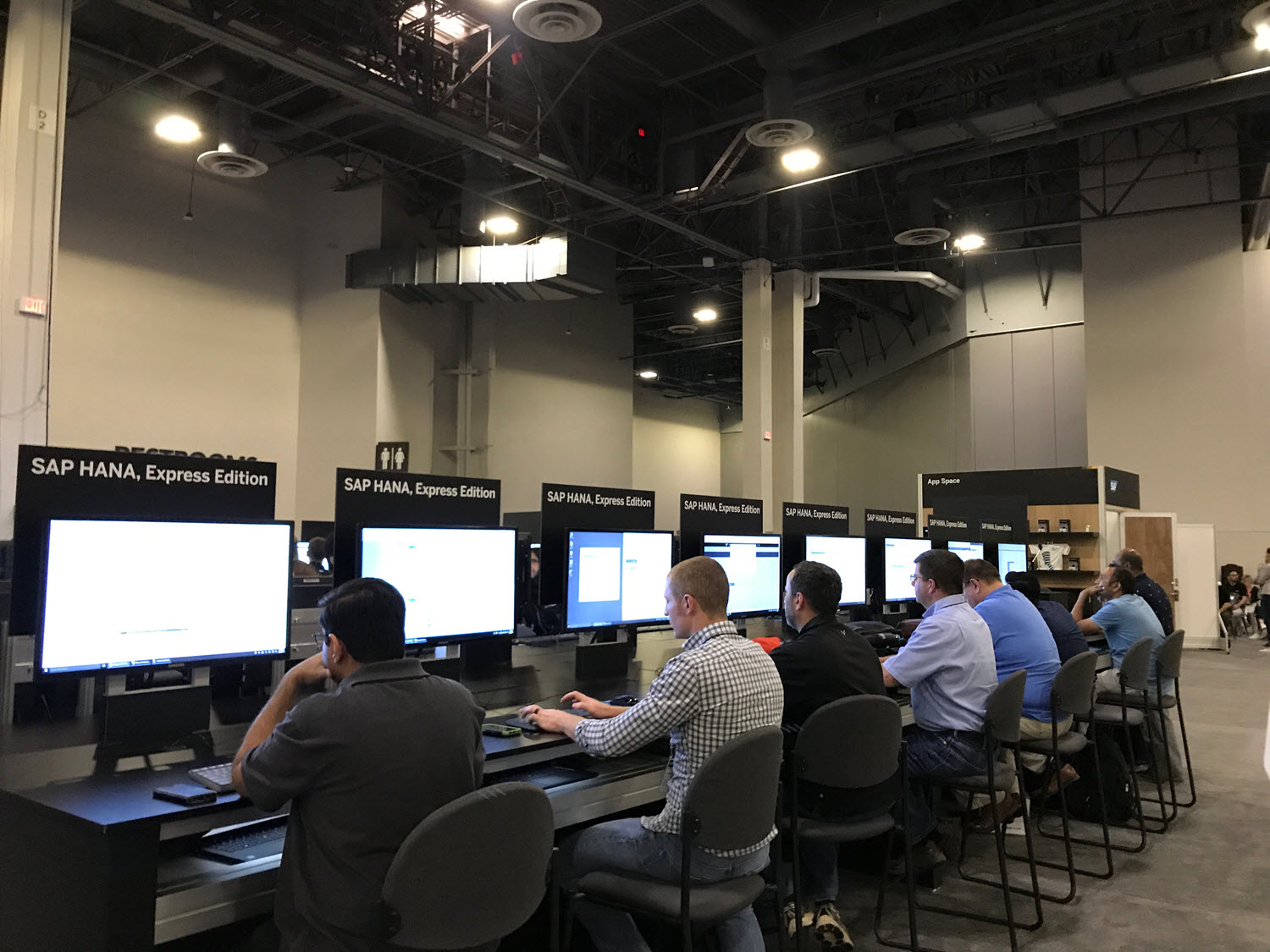 The App Space being open for 3 days, we had about 8 machines for HXE but the demand was so popular, we had to set up another 8 for the rest of the event. This here is day 2 of the App Space ~ we got both rows full of HXE experimenters! 😀 Takeaways from the App Space: Users who successfully completed the tutorial set for HXE basically went through a mini version of the end-to-end user workflow that we expect to have for the full VM installation package with XSA ~ which meant that the user experience for this workflow was a scaled-down prototype, perfect to understand what users went through in real time! This was a wonderful opportunity to observe the learning curve for HXE among a variety of users (existing HANA users, first-time HANA users, DBAs, developers, users familiar with HANA but with no extensive knowledge, BI/data analysts with less technical backgrounds etc.) This really helps us understand the different user personas and user scenarios. What’s best is that, every user had something to say about their development experience with HXE, from the setup process, to actually getting down to the development and deployment sections. All in all, it was a fun learning experience for everyone. Participants won prizes after successfully completing tutorials (and they were a large number) and we had wonderful conversations with users.

Aside from the App Space, I also had the opportunity to be part of a couple of sessions on HXE ~ Roadmap and What’s New sessions. There was an overwhelming number of attendees who actively participated in the sessions by asking questions and engaged in some after-session networking.

We also had a hands-on workshop session on the last day about getting HXE running in a Docker container. And guess what?? We had only just released SAP HANA, express edition on the Docker Store that very week! Go check it out, if you haven’t already: https://store.docker.com/images/sap-hana-express-edition. (Server-only version for now).

So, being a fresh live concept, getting users to try to get a Docker container running and having an HXE (server-only) instance running in their Docker containers was an exciting first-hand experiment for us! Some trials and errors later, we had a significant number of users successfully able to deploy the tutorial and get HXE running in a Docker container (yay!) And with this wonderful live experience, SAP TechEd Las Vegas 2017 drew to a pleasant end.

And so, to conclude, my first SAP TechEd experience as an attendee/presenter/volunteer/booth owner/workshop assistant, has proven to be very fruitful in my journey of learning and aspiring to understand my end users, as it has been equally fun to interact with them from a developer-to-developer perspective. Can’t wait for the next TechEd! 🙂

Great blog Annie! It certainly sounds like you were awfully busy but extremely happy with having a chance to get first hand feedback from HXE users - great job!

I can feel your excitement. When I first participated Teched back in 2012 as a participant I felt like I am in a wonderworld - hundreds of sessions and the geeks around (Mentors, bloggers I knew through SCN) made the event memorable. Till then I haven't missed this event.

How cool!   It is so much fun at Teched.   You also had a great time showing off your product.   That's awesome by itself.   I love it!  Add to the fact that you did so many other things, I bet you were exhausted!