ETag is a GateWay feature for collision detection. It is a very useful to solve the problem of multiple users updating on the same object using the optimistic lock. This blog gives a detailed implementation.

Our story is a bit different. It’s about how a single user is updating the same object multiple times and how ETag can detect this and make the UI & Gateway on the same page.

Here is what happened: 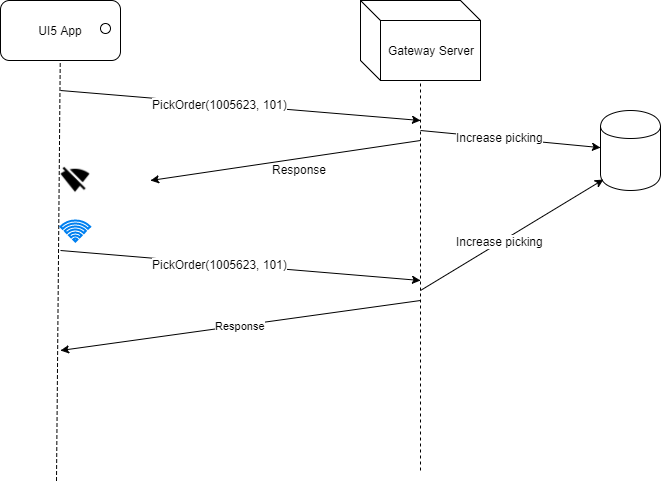 Our client happens to have a faulty device, which constantly has wifi connection loss and reconnection. (It’s is out of scope to analysis hardware issue on this blog, so I’ll focus on the software part only), Then things happened:

Now the problem is that UI5 app “thinks” its request has been delivered only once. Because it only gets 1 response. However, the order in the backend has been picked twice. This causes an over-picking, while the user intends only pick one.

The Solution: ETag to deal with collision detection

The solution to this is pretty standard, the ETag. Once UI sends the same request multiple times, Gateway will fail the second one,. Then the UI is forced to refresh to get the latest status from gateway. So the status on the UI and gateway is consistent.

Good to know this usage.

Thanks, Joseph. Another ex-colleague is experiencing a same issue too.

Identifying the real problem and test the solution is much harder than implement the solution itself. My tester colleague is even thinking of test on a tablet in a car to get a connection loss...