Welp, it’s all over but the Tweeting (and the next two SAP TechEds).

Months of planning, hundreds and hundreds of session hours, and one whirlwind week at SAP TechEd Las Vegas is coming to a close, and you had a LOT to say about it on Twitter! I’m one of a small group of people with the privilege of moderating SAP Cloud Platform’s Twitter handle at @sapcp, and while I was preparing our internal report for this week, I thought I might as well share it with everyone, since you are after all the ones who made it happen.

I’m using our social media tools as well as Twitter’s analytics to report on what the week was like, though these tools are far from perfect, and I add my own subjective opinions to the mix. While these takeaways are hardly scientific or conclusive, they aggregate what I think were the major points. Let me know your own thoughts and anything I might have missed. Also feel free to let us know if what @sapcp Tweeted was helpful, too little, too much, or something in between. Your feedback always matters most! Thank you for engaging! 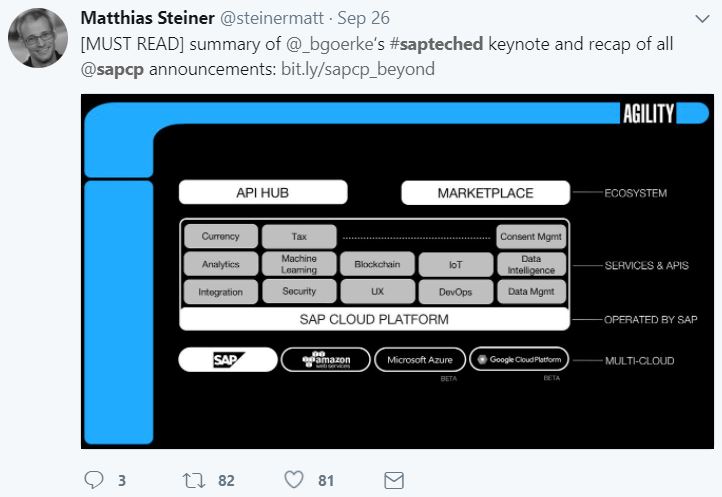 From the moment he took the stage, it was clear on Twitter that  — Bjoern’s – keynote was going to knock it out of the park, and that it did [WATCH]. 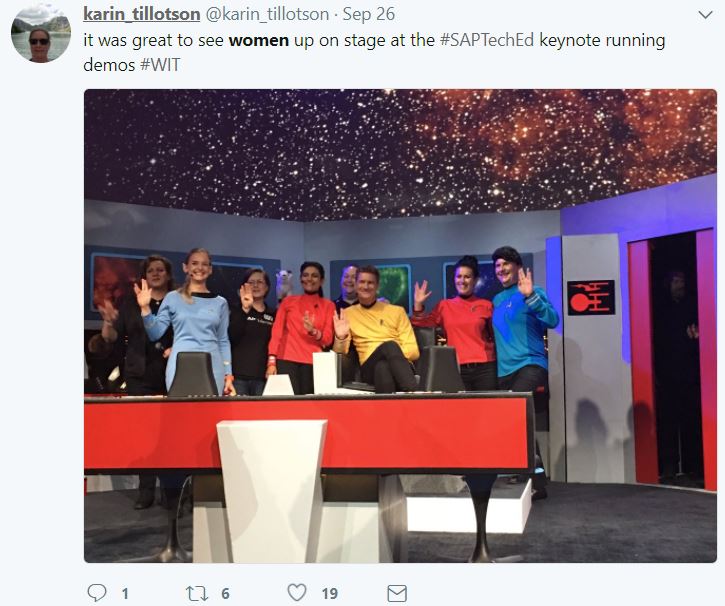 From a content perspective, Bjoern covered the spectrum of SAP technology in the keynote but from its coverage and from coverage overall of SAP TechEd on Twitter, many of you thought that the highlights of TechEd in general were all about cloud. From the SAP Cloud Platform team itself, we did our job to evangelize our announcements:

The must-read SAP Cloud Platform companion blog by Bjoern was the most-shared blog on Twitter, and has 1261 views as of today, three days after publication.

The ABAP announcement blogs by Florian Wahl – https://blogs.sap.com/2017/09/26/sap-cloud-platform-boldly-going-beyond/ and https://blogs.sap.com/2017/09/26/overview-of-abap-in-sap-cloud-platform/  – clock 1100 and 500 views respectively, but the rest of the cascade has significantly fewer views, indicating that Twitter is driving the majority of traffic, since Twitter really hyped Bjoern’s blog and the ABAP blogs.  Those related blogs are nevertheless important and include Harsh Jegadeesan on API Business Hub (101 views), Michelle Huang on Mendix (180 views) and Arun Bhaskaran Nair on the SDK for Service Development (279 views, published a couple weeks earlier).

Midhun VP penned a piece about the top-five takeaways (which were mostly about cloud): 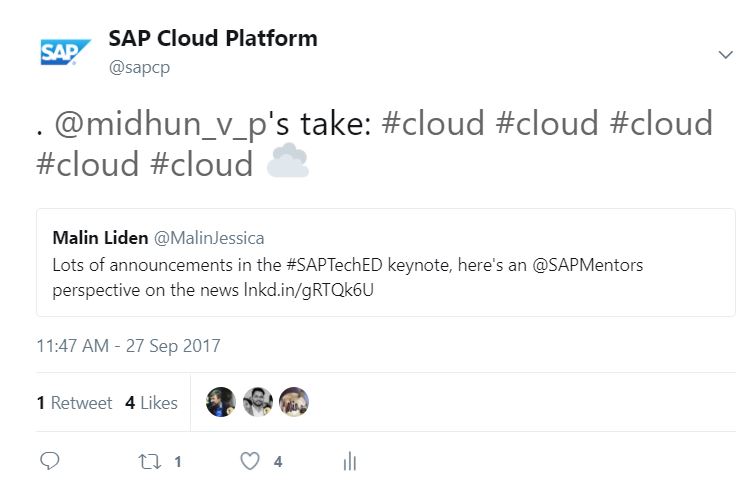 Via Twitter we also learned of some of your wraps as well, including a good Keytree wrap: 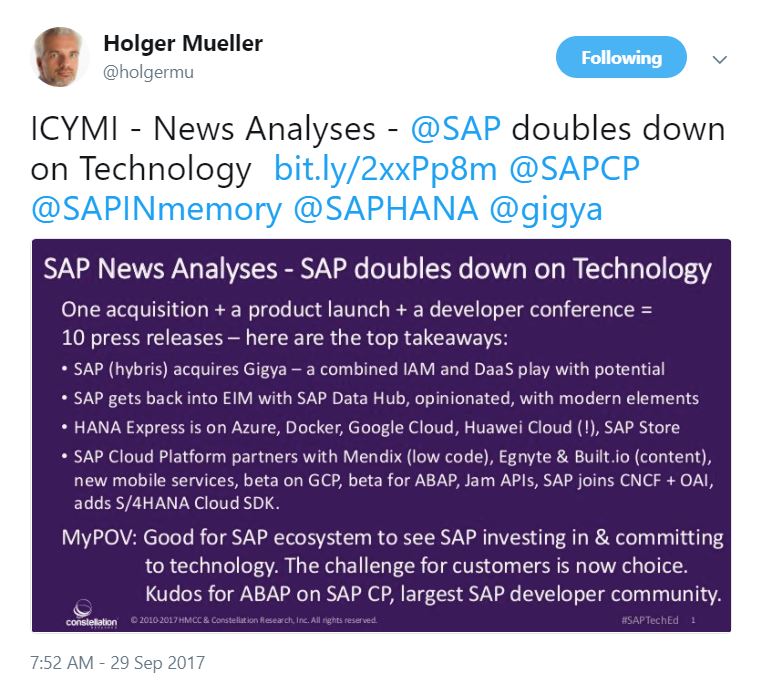 Did you blog a wrap on SAP TechEd? Drop it in the comments.

Yes, you are passionate… about ABAP!

There is no shortage of opinions about ABAP, and this announcement accordingly led to a lot of chatter on Twitter.

The comments threads on the two announcements blogs by Florian Wahl are vibrant but don’t hold a candle to the raging conversations on Twitter.

In general opinion is favorable – 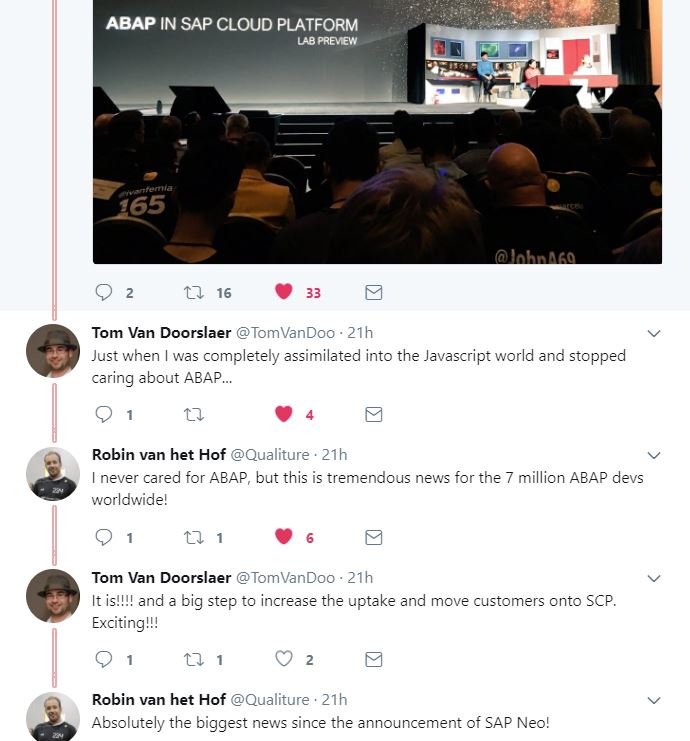 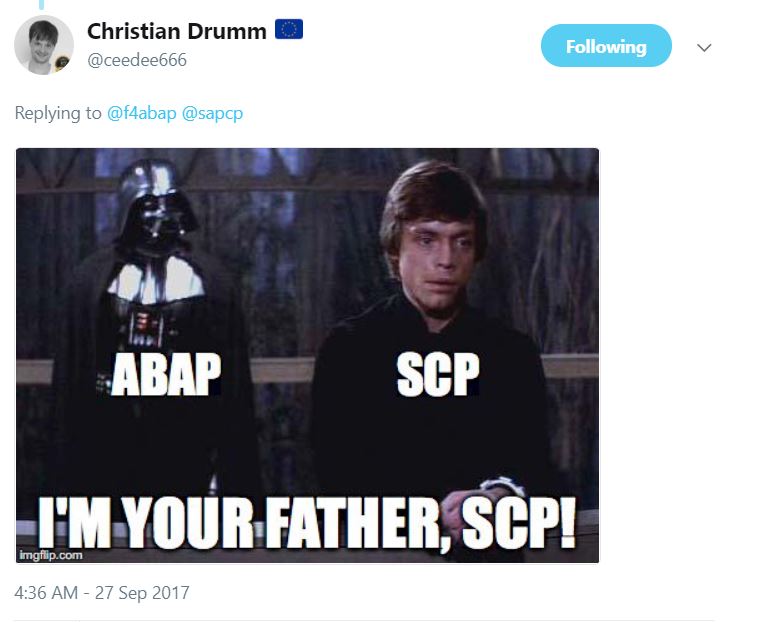 — but there are a few healthy skeptics — 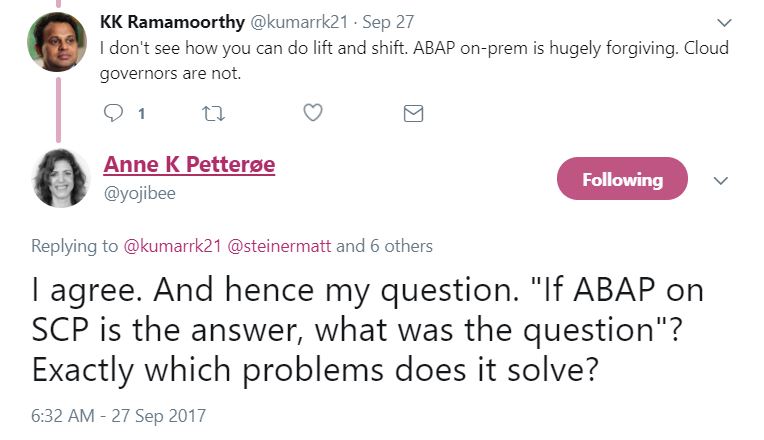 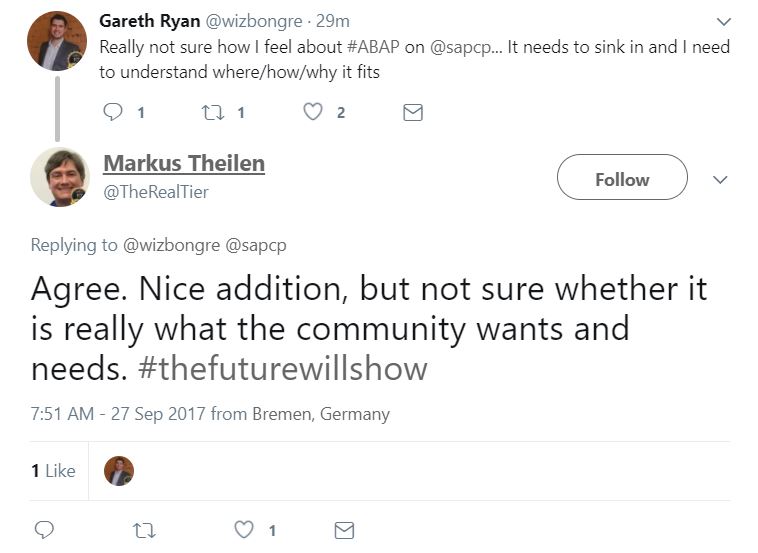 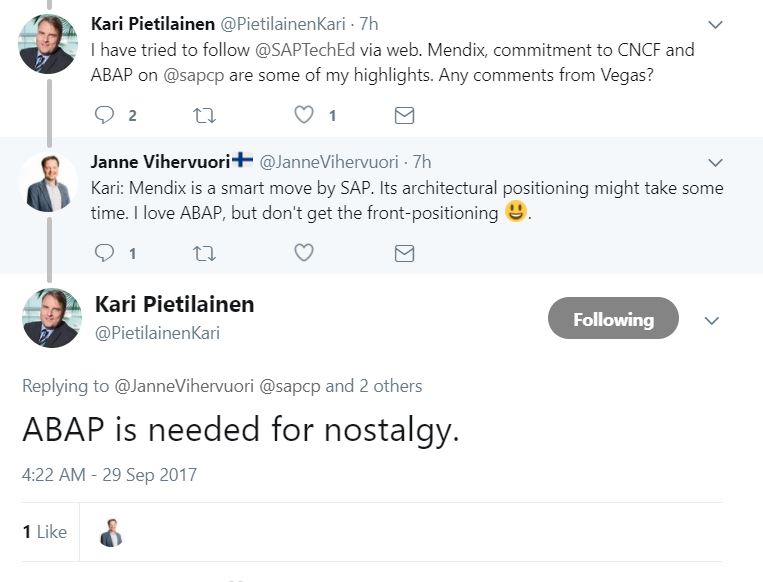 And a few downright stubborn hold-outs  🙂 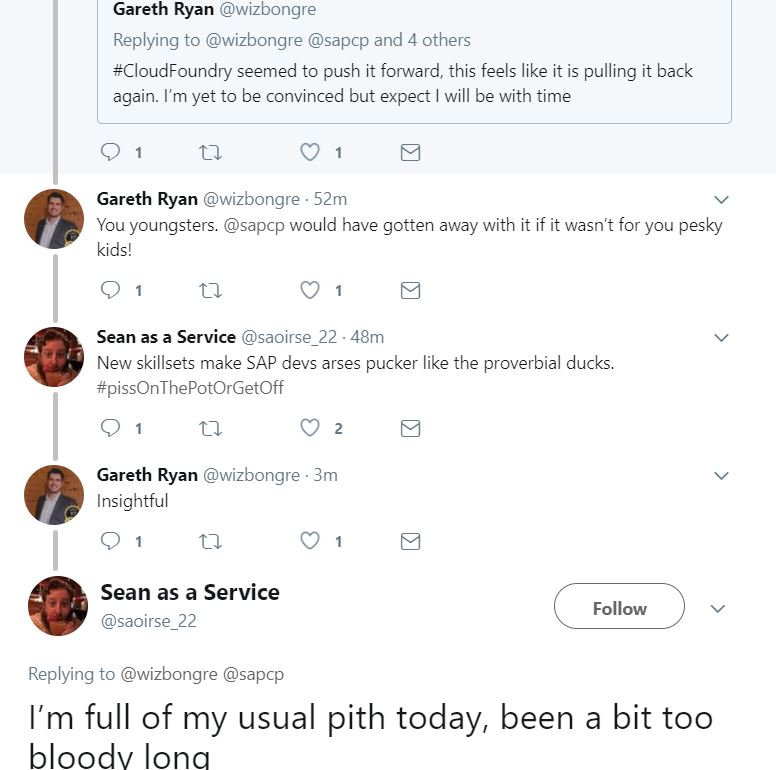 Along the more thoughtful lines, we had a couple of fresh blogs take a look at what’s going on right away — please feel free to engage in the comments:

… including a whopping nearly 200 tweets on Tuesday keynote-day alone. That’s about 8 Tweets an hour averaged over the day – not too much, right?  Especially since you engaged with every tweet, on average, over three times each (you liked, retweeted, or replied to it). Those are the metrics I want to see: What are you doing with our info? What are you saying?  While I’m glad that’s high per tweet, how you interacted with YOUR tweets blows it away.

So who did all that talking?

True – that does include what SAP people said. Do a search for #SAPTechEd on Twitter  – sorted by “Top” and you’ll find different results at different times – at the moment, Tweets by The Community Goat, SAP TechEd, and Bjoern Goerke return the highest results, but at least at some points during the show our godfather and original evangelist Matthias Steiner showed up in top billing: 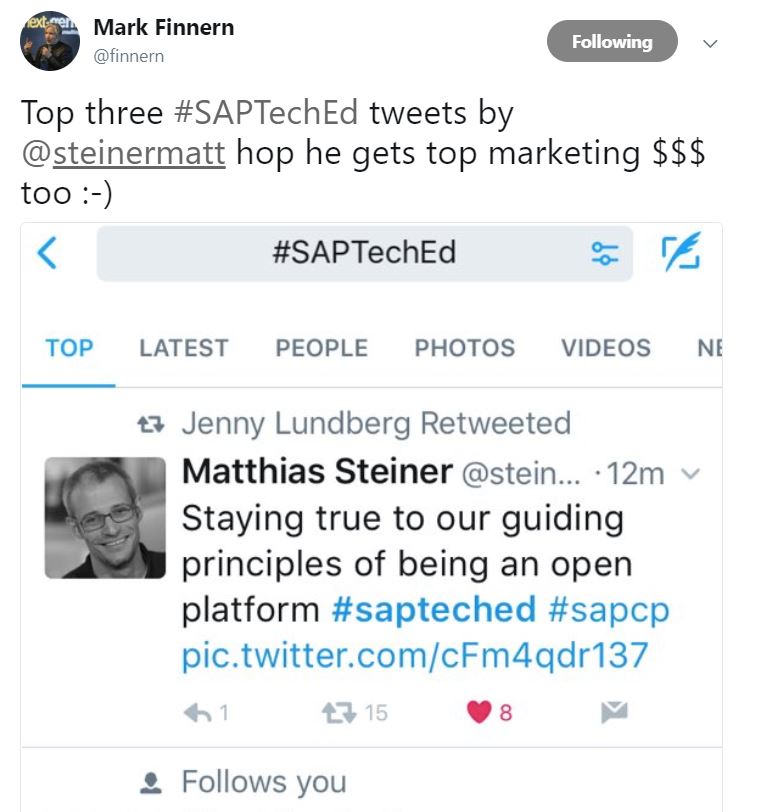 According to our stats from the week, this is how it wound up (individuals only – companies, obvious bots, spammers omitted):

Who tweeted the most about SAP Cloud Platform?:

Who’s tweets reached furthest (appeared in the most timelines)?

And WHAT were you saying?

You loved talking about ABAP and Mendix.  You also loved talking about Sindhu Ganghadharan’s demo of blockchain, and of course Captain Bjoern Goerke and Jana Richter in the keynote as well.  And you particularly liked retweeting Matthias 🙂  There’s a lot more there in that word cloud. See if you see yourself:

The bottom line is that SAP Cloud Platform is more than a brand – it is an ecosystem, and one in which individuals pack the most influence and trust over our brand. Ergo: Use YOUR voice – it matters!

I have just a couple more takeaways. This week’s initial statistics show that video is viewed at least three times more often on Twitter than on YouTube.

We posted three videos directly to Twitter this week:

In contrast, videos posted to YouTube show only up to a third of the view counts, and that’s even if we Tweet links to them.

Though that’s a hard comparison since YouTube isn’t currently the ‘push’ channel that Twitter is, that tells us we probably want to invest more on Twitter-hosted video and even experiment more with live video. The stats show though that people drop off significantly the longer a video is, so the key is to keep them short enough – below even Twitter’s default max length of 2:20minutes. Do you agree?

You’re also mostly using iPhones to view the videos —  which pretty much mirrors those viewing our Tweets in general. Here are the stats for one of the videos we posted on Twitter’s servers – hey look at India getting online to watch!: 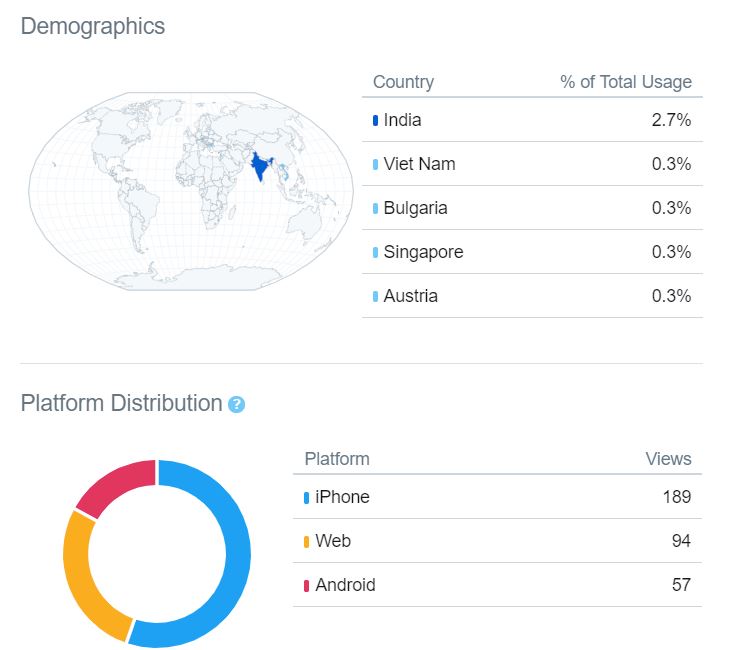 Road map tweets are always highly viewed and shared on @sapcp and our latest SAP Cloud Platform Road Map, which we published on Wednesday on SlideShare and pointed the below Tweet to, has been viewed over 500 times in just two days: 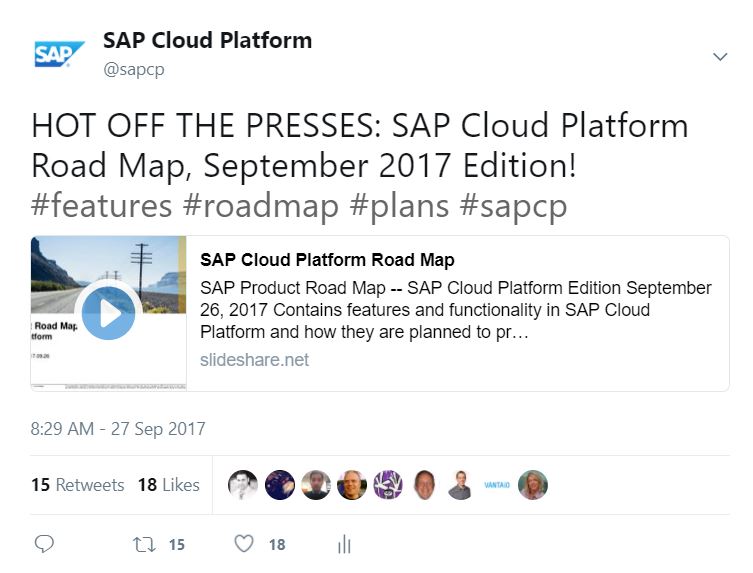 A Final Word. Polls: The jury’s still out…

Yeah we tried a poll once or twice this TechEd season.  This one ran for a day and only 13 of you responded – so I’m not sure where we go with this.  Maybe we need more relevant questions? 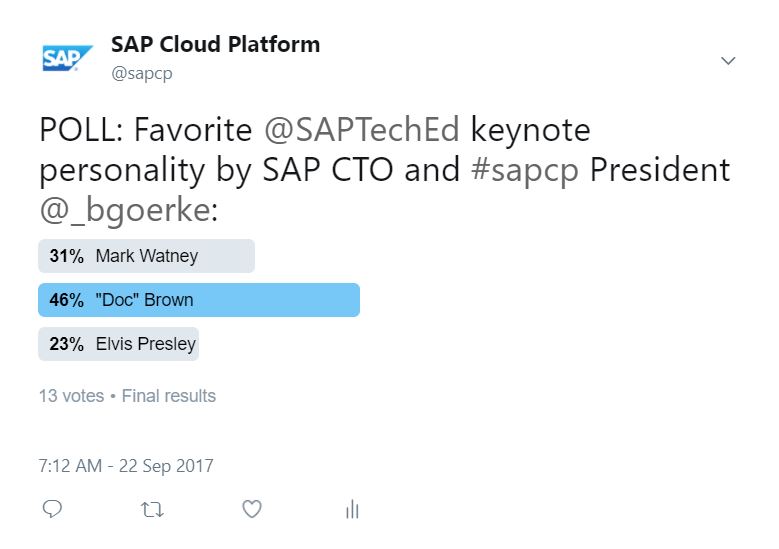 Elvis, by the way, has left the building.

Great work. Thanks for the comprehensive analysis. This reminds me that I have a pending blog to post on my key SAPTechEd takeaways :0

Thanks for being there Champ! Can't wait to see your takeaways!