On September 26th, Björn Goerke, Chief Technology Officer of SAP, announced another milestone of SAP’s Platform as a Service offering – the planned availability of ABAP as an additional development and runtime environment in SAP Cloud Platform.

SAP Cloud Platform is SAP’s strategic Platform as a Service (PaaS) offering for SAP customers and partners to build, integrate and extend SAP’s business solutions and services. Today, SAP Cloud Platform applications and extensions can be built with different development environments like Java or Node.js, but SAP’s own environment for business applications, ABAP, has not yet been available so far.

ABAP in SAP Cloud Platform is based on the latest ABAP Platform Cloud release which is also used for SAP S/4HANA Cloud. It leverages the multitenant database container technology of SAP HANA. The software stack contains standard technology components familiar from the standalone ABAP application server. It supports the new RESTful programming model including SAP Fiori and Core Data Services (CDS). SAP Services and APIs are offered according to a new whitelisting approach.

ABAP in SAP Cloud Platform introduces a subset of the ABAP language optimized for the cloud. This subset excludes statements which are not compliant with secure cloud operations such as direct access to the file system. In addition, ABAP statement variants which have already been deprecated have been removed from the language scope.

SAP has a huge customer and partner base running their mission-critical businesses, their digital core, with ABAP-based solutions like SAP S/4HANA and SAP Business Suite. Consequently, a tremendous ABAP code base has emerged over the last decades.

Most of the existing solutions are operated on-premise. At the same time, SAP sees a growing adoption of Cloud-based solutions like SAP S/4HANA Cloud which require tailored extensibility options for customers and partners.

This is why helping our customers to transition their digital core to the Cloud has become a central part of SAP’s Cloud-focused strategy. One crucial factor in making this transition a success is how well extensions to SAP code, implemented by customers or partners, are supported. To get a clearer picture of which extensibility options are currently available, let us do a quick recap of the basic concepts:

The Cloud implies standardization and automation of processes and operations. Consequently, cloud vendors update software regularly in an automated event for all tenants. As a result, all cloud customers run on the same vendor software version, and the vendor software must be strictly decoupled from any custom extensions. Extensions can only use well-defined and stable interfaces provided by the cloud vendor. Modification concepts of vendor software, familiar from SAP on-premise solutions, are not feasible in the Cloud. Taking these preconditions into consideration, the following two extensibility options are available (please also refer to figure 1): 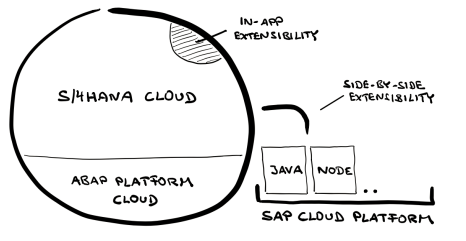 But there will be no 1:1 reuse of existing on-premise ABAP custom code packages in SAP Cloud Platform!

Consequently, the extent of code reuse heavily depends on the quality and nature of the custom or partner code. Loosely-coupled add-ons with a clear interface to SAP objects will have a significant code reuse. Custom code interwoven with the extended product might entail significant refactoring. 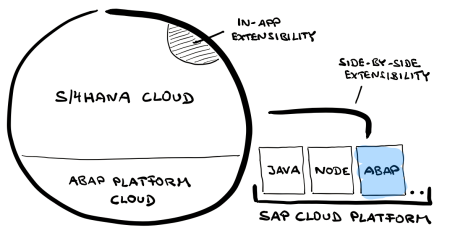 Planned availability for ABAP in SAP Cloud Platform is 2018. A customer engagement initiative will be launched in late 2017 to collect feedback from early adopters. The current roadmap starts with the extension scenario for SAP S/4HANA Cloud. Further use cases will be added moving forward.

ABAP in SAP Cloud Platform adds ABAP as an additional development and runtime environment along with the existing ones like Java or Node.js. While this offering adds value for a number of different use cases, the first target group are SAP customers who are moving their business processes to the Cloud using SAP S/4HANA Cloud.

DISCLAIMER: This blog post reflects the current state of planning which may be changed by SAP at any time.

When I read about BYOL in SCP Cloud Foundry I was curious why ABAP was not brought in. Now know why …It was matter of time.

Great to finally see ABAP going to the cloud, now much closer to Javascript, machine learning and everything on Cloud Foundry!

While I really welcome ABAP as a new language runtime in SCP I wonder where the road will lead us to.

I totally understand why SAP has an interest to provide legacy support for existing customers as put here:

While this offering adds value for a number of different use cases, the first target group are SAP customers who are moving their business processes to the Cloud using SAP S/4HANA Cloud.

One thing I do not get is why a new set of ABAP, specifically for the cloud, is introduced. Either it is geared to easier adaption of existing processes to the cloud (--> Legacy support) or it is meant as a full fledged development language.

SCP is (could have been) a new starting point for SAP to align with existing and widely adopted technologies. It is done by choosing HTML and JS with UI5. In my opinion a real benefit would have been to promote Typescript as main language and let ABAP stay on Premise.

I love ABAP and now my sweet heart gets what it deserved, third class languages and creepy java was getting the love. Long live ABAP.

Much Awaited News.. Many Fault leaders should learn shut mouth concept now.. ABAP can do much more.. its matter of time..

It's a great news!!! I am eager to know about road map for BOPF and ESF2 Business Objects in SAP Cloud.

Great to know that ABAP will be available in SCP. It would have been great if it was available earlier.

SAP's application teams will be very happy to have ABAP in SCP, so that some reuse components (typically from Cloud Foundation) can easily be moved to SCP (from existing S/4HANA) without having to write Java applications for the same purpose.

Any known limitations to ABAP development in SCP for SAP's application teams?

Great news that ABAP will be available in SCP. Transition to SCP will be seamless. Re-writing Java applications would have been time consuming.

ABAP is a wonderful language. Glad to hear that it will be available as part of SCP

Delighted to know that ABAP will go long way ahead

Thanks for the Update. would like to know if ABAP in SCP would support feature like AMDP ? would this also mean someone who wants ABAP on SCP need to have SCP HANA service ? as the article also say it supports CDS.

please refer to my answer to your question in the FAQ blog post:

AMDP is planned to be available in one of the next quarterly releases after GA.

Regarding your question about HANA, the ABAP environment on SAP Cloud Platform will be delivered with an included HANA database. Consequently, a separate HANA service will not be required.

As SAP GUI will not be within the solution scope, SEGW will not be available anymore. Instead, there will be a syntax object, where you will be able to describe read/write/query services embedded in the ABAP language and to implement them by a class.

I Have created a report in local folder in eclipse by connecting to ABAP System , how can I deploy the report into SCP .

Is it somehow integrated with GTADIR, meaning I would have to rename the objects I move out of classical ABAP components?