Developers from SAP Labs Israel have created an app that could ultimately lead to the development of new treatments for ALS. In memory of Zohar Rosenblat who died in July 2017. 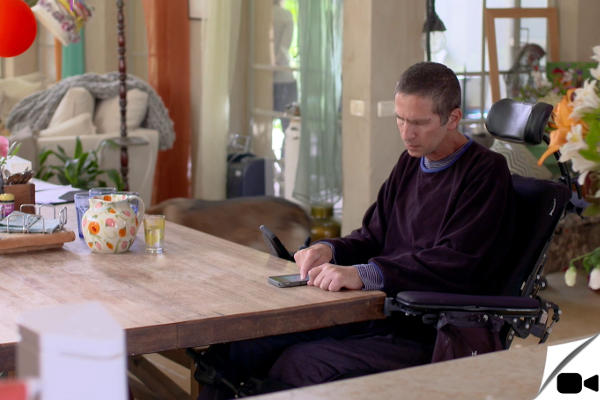 Although the disease was first diagnosed over 150 years ago, there is no known cure for amyotrophic lateral sclerosis (ALS), also known as Lou Gehrig’s Disease, a neurodegenerative disease involving the motor neuron system.

ALS continues to confound researchers, and one of the main reasons is the lack of reliable data from patients. Unlike diseases such as multiple sclerosis, which involve episodic deteriorations to the sufferer’s condition, ALS is a progressive disease in which there is a continuous deterioration at a relatively uniform rate, varying from patient to patient. Doctors usually assess the patient once every three months, but this becomes more difficult as the mobility of the patient deteriorates and they elect not to come to the clinic.

A volunteer group of software engineers from SAP Labs Israel are out improve the chances of a cure and are already playing an important part by mobilizing patients to track and log data about their condition.

The ice bucket challenge initiative from a few years ago led to increased awareness of the disease, but also a meeting between SAP Labs Israel and Prize4Life – an organization founded by ALS sufferer Shay Rishoni, formerly an award-winning sportsman. This, in turn, led to a “hackathon,” in which 35 SAP Labs Israel employees spent three days working on an application with the goal of supporting research into the disease.

The result was the ALS Mobile Analyzer, an app that enables patients and caregivers to easily collect and upload relevant patient data to healthcare professionals and researchers on a daily basis, all from wherever they are located. Besides providing objective measurements, the app also allows patients to easily fill out subjective questionnaires about their function and quality of life, providing a picture of how they are feeling in general.

“This analyzer will actually allow us to get a great deal of clinical data about the patients using very little effort,” says Dr. Marc Gotkine, Senior Neurologist at Hadassah Medical Center in Jerusalem. “The data will be collected remotely and we’ll be able to identify certain red flags, which may indicate that we need to intervene in some way, for example, if they lose weight or if their respiratory parameters are declining. Then we will know to address that, even if they don’t have an appointment for the clinic.”

But the benefits go beyond immediate patient care. One of the biggest obstacles to developing a therapy for ALS is the expense of clinical trials, much of which is related to the time needed to collect clinical data.

“Not only do we need data during the time that an experimental treatment is given, but we also want ‘running data’, which is the data before the time a patient started a certain treatment,” explains Gotkine. “Collecting this data allows us to then compare to how the disease is progressing after the entry of a clinical trial. This will significantly shorten the length of time needed to perform a successful clinical trial and therefore cut the costs.”

Dr. Marc Gotkine believes the app could even lead to the elusive cure for ALS.

“I expect this app to revolutionize the way that we track ALS patients in the clinic and possibly, even more importantly, it will accelerate the clinical trial pipeline so that we achieve meaningful and effective treatments a lot sooner. I think that the app will expedite reaching a cure.”

Gotkine’s wish is for the app to be used worldwide, enabling a uniform method for collecting data that will, in turn, allow standardization and comparison between different data sets from all around the world, which, he said, is “a very powerful tool.”

The neurologist is not the only believer in the app’s potential. The project has already been awarded a $100,000 grant from the Genesis Generation Fund.

As for SAP Labs Israel’s team of volunteers, they are currently working on an add-on to the app, which measures the lifting of the patient’s arms. SAP team lead Meirav Daniel is excited about the grass roots achievement from engaged employees. “If in five years this will have resulted in a breakthrough, it will be a dream come true,” she concludes.

The ALS Mobile Analyzer app is available for iOS and Android devices.

I was diagnosed with bulbar ALS in the summer of 2019; My initial symptoms were quite noticeable. I first experienced weakness in my right arm and my speech and swallowing abilities were profoundly affected. The Rilutek (riluzole) did very little to help me. The medical team at the ALS clinic did even less. My decline was rapid and devastating.if it were not for the sensitive care and attention of my primary physician I would have been deceased,There has been little if any progress in finding a cure or reliable treatment. Acupuncture eased my anxiety a bit. Our primary physician recommended me to www. kycuyuhealthclinic. com and their amazing ALS treatment. My symptoms including muscle weakness, slurred speech and difficulty swallowing disappeared after 4 months treatment!  The herbal treatment is a sensation.

Hope this is allowed here if not I understand. My husband was diagnosed with ALS (amyotrophic lateral sclerosis) when he was 63 years old 4 years ago. The Rilutek (riluzole) did very little to help him. The medical team did even less. His decline was rapid and devastating. His arms weakened first, then his hands and legs. He resorted to a wheelchair (Perbombil C300). A year ago, I began to do a lot of research and came across Health Herbs Clinic, I decided to start him on the ALS herbal protocol as I had nothing else to turn to;  2 months into treatment he improved dramatically. At the end of the full treatment course, the disease is totally under control. No case of dementia, hallucination, weakness, muscle pain and he is even learning to Walk again. visit w w w healthherbsclinic  c o m