I thought I would share my latest findings on the SAP Cloud Platform, since I am pretty excited about the capabilities.

As most of you probably know, the Multi-Cloud version of WebIDE was in May this year. I must admit, I didn’t really look at it until recently, because I only thought it had something to do with the Cloud Foundry, which is still an area that I owe myself to look into in more depth.

However I think the most interesting innovation on the WebIDE is that they moved from the older Eclipse Orion platform onto the Eclipse Che. So this probably means a whole heap of new bells and whistles, which I probably wouldn’t be able to explain probably anyway. But one thing that I do know is that now you can run Grunt tasks and customise your build tasks for your UI5 projects.

This blog is to explain how you can use it. More specifically how you can convert your JSDOC comments into a proper documentation, without you having to do a thing! Cool right!!!

The URL is pretty much the same as for your normal WebIDE, just add CP after WebIDE in the URL.

First thing you will notice is a new splash screen, but otherwise it looks pretty much the same.

I’ve cheated a bit and already created a project for this example. I’d expect you would know that by now.

First thing is to show you how you can easily create a JSDoc for a function.

Right-Click the function keyword and press the Generate JsDoc Comment.

You can check how to write proper JSDoc comments here

This rule can also be used for your eslint.

My function is fairly simple. I receive a string as a parameter and output to the console. So my JSDoc is like:

Now to the fun stuff.

I like to keep my Grunt tasks clean, so create a folder in the root of your project named “tasks”

And another one named “doc”

The first folder is for all our custom grunt tasks. The second is for storing our documentation.

Create a file in the task folder named “jsdoc.js”

Paste the following into your newly created file:

So what does this file do?

Well this is our task configuration for the JSDoc grunt. This inputs the folders that we want documented. In our example its the webapp folder and the controller folder and then all js files in those folders.

Next thing is to create a package.json file in the root of your project. This file is the configuration for our build process. We need to load the depending npm libraries here.

Add the following to the file

Obviously changing the name, description and author. The dependencies is where we load our npm libraries.

Next is the gruntfile.js, this needs to be created as well in the root of your project

Our grunt file first loads the config from our package.json file, next loads all our tasks from the task folder and thirdly builds our tasks in the default task runner. The ‘lint’,’clean’, ‘build’ are all the normal build process in the webide. The last one is our task for our documentation.

Now we are ready to build our project.

When the build is complete our doc folder will be filled with html files with the same naming as our javascript files.

Each html file consists of all our code and then hyperlinks to the function documentation. 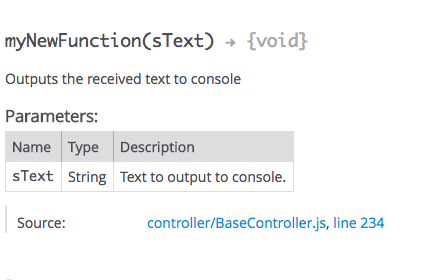 For more inspiration on grunt tasks, have a look at these blogs and tutorials:

Nice work, Jakob. If the documentation is auto-generated there is a good chance that it will be up to date. If it's up to date we devs might actually use it

Thanks for your blog. I followed all your steps but it didn't work.

Here is my package.json :

What could be the problem ?