All weather forecast was blazing guns from the beginning of the week, NASA, weather channel and all major news agencies issued warning on a huge category 4 tropical storm forming on top of Gulf of Mexico and preparing for an impending catastrophe. It started raining from Friday the 25th morning and relentlessly the landfall continues. Anticipating the calamity, people were stock piling water, basic food etc. from Wednesday onward. As a result, local market was out of water, dry foods etc. from Thursday night.

It rained hard for three days relentlessly, we were watching news of flooding Houston all over, however to our surprise the area of Katy where I live was not inundated till Monday (28th Aug) morning. On Monday morning, the rain seemed to be slowed down, we were about to breathe a sigh of relief, a team from FEMA came to our apartment and issued warning that our apartment complex would go under water soon. Initially we thought it would be a temporary issue and the water will recede in few hours. So, we did not think of evacuating.

Overnight it rained steadily and to our worst nightmare, the reservoir near my apartment spilled over and flooded all my apartment complex. Tuesday, 29th we had to evacuate our home, moving out on a rescue boat, following a mandatory evacuation order from local authorities. Luckily, we have a good friend near downtown Houston and his apartment was not flooded, so we decided to go to his place. Soon 3 of my friends along with their respective families had to evacuate their apartments too and we all took shelter to our friend’s apartment near downtown.

We, four families (12 members) were staying in my friend’s apartment. My good Samaritan friend had no dearth of effort to make the place comfortable, however the worry was gripping within us gradually. There was little we could do at that moment apart from watching news, praying for the best and waiting for the water to recede.

Upon doing some research, I found US Army Corp has installed many IoT sensors (Radar, Press Transducer  etc.) across US and they monitor vital statistics like water level, water body areas etc. in near real time. Looking even more deeply I found some API’s from US Geological Survey that was feeding me data of these IoT sensors. Bingo!! We started monitoring the data. But looking at a JSON payload in each 15 minute is not a soothing idea, so I decided to build an App based on SAP Cloud Platform. After all, when you have free internet and three other friends are snoring beside you what else you can do better at night? J I started building my app to monitor the reservoir near my apartment. And in the next morning I developed the app:

This was handy as I could see the water level from my mobile as well with a better UX.

Later I decided to convert the same on SCP Cloud Portal and publish this:

At this moment this portal is set for Barker Reservoir ( #SAPiotMonitorsHarvey ) near to my apartment only. But this can easily be configured for any other waterbody where US Army Corp has installed high end sensors.

It’s not even two weeks when we are slowly recovering from the aftermath of Hurricane Harvey in Texas, another threat of a category 5 storm is looming on Florida. Hurricane and flood as it’s aftermath is seems to be inevitable in certain part of the country. So I decided to move further and make the flood monitoring site more dynamic. Now you can enter your address and monitor water level of your areas across nation. Just follow the three simple steps:

Here is the glimpse: 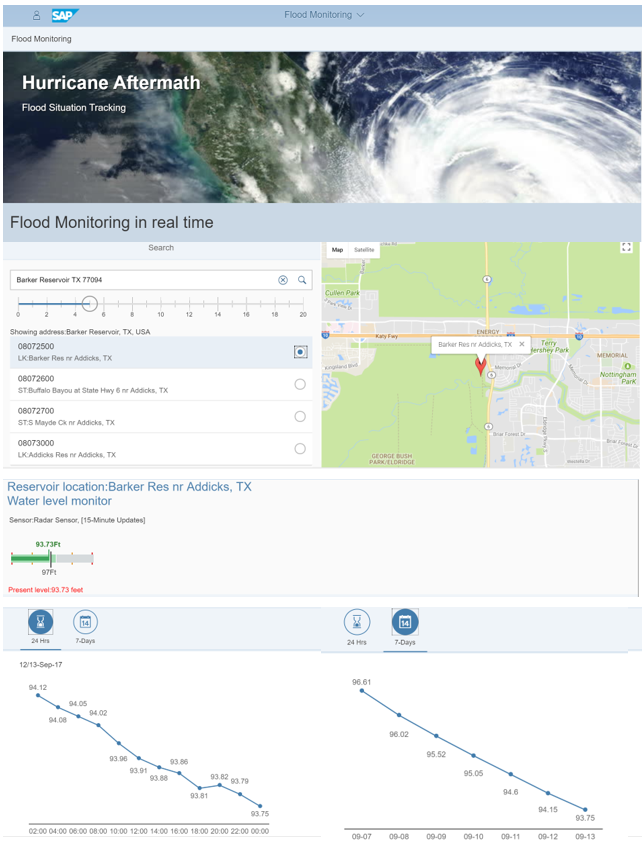 Well... In these difficult for our country times there are only a few things that really can make me smile. And this blog is one of those things. Flood Monitoring is very good idea. People need this useful information. That's why i'll share this article with all my friends. Thank you very much!

Hi Shibaji. First of all - sorry to hear about the flooding. Good to hear you are ok.

In Wrocław we had 20th anniversary of "Millennium Flood" this year. Too bad we had no technology we all have today with Internet (of Web, of People, and of Things).

Great use of technology in your case! Could you please share what public APIs you used here?

Here is the API:

This quite amazing that in a situation like this one, you decided to go on and develop an app.

Great Job and hope things will be better soon.