This blog is continuation of my previous blog:

ABAP Core Data Services – Introduction (ABAP CDS view) in which a detailed introduction is given about the Core Data services.

Before, start reading this I would request you to go through above mentioned blog for better and smooth understanding.

In this blog we’ll start about the ABAP Core Data services.

To reproduce the steps described in above guide, the user on SAP NetWeaver Application Server with the following roles assigned is required:

Hoping, all the above mentioned prerequisites are setup.

After the introduction of CDS in SAP HANA, SAP realised CDS can be introduced with ABAP application server which will allow ABAP to benefit from the enhanced capabilities that are offered by the data definition language of CDS compared to the form based ABAP Dictionary tool. So, SAP introduced ABAP CDS views in ABAP 7.40 SP05 release. Since the ABAP Dictionary already had the capabilty of defining tables, views and data types, the natural way of introducing CDS on the ABAP application server was to add it to the ABAP Dictionary. An ABAP Development Tools (ADT) based source code editor allows us to create Data Definition Language(DDL) sources in Eclipse or SAP HANA studio.

An ABAP-based CDS plays a significant role in the foundation of SAP Business Suite 4 SAP HANA (SAP S/4HANA). A large set of CDS artifacts — several thousand of CDS views — consisting of several hundred thousand lines of ABAP code, has been intoduced by SAP to represent the underlying core data model of the SAP S/4HANA solution. The standard ABAP CDS views, ERP tables and views can be reused in custom CDS views in ADT source editor.

The main motivation behind using ABAP CDS views from ABAP 7.50 SP00 where most of all the functionalities has been introduced for SAP S/4HANA is to provide a semantic layer on top of the traditional physical SAP ERP tables, which often act as physical data containers on the database and have a very complex inner structure which, in most cases, cannot be evaluated without traditional ABAP processing. The semantically rich data modeling provided by CDS enables this layer in SAP S/4HANA facilitating simplified, efficient access to the underlying data.

ABAP CDS provides a framework for defining and consuming semantic data models on the central database of the application server AS ABAP. The specified data models are based on the data definition language (DDL) and the data control language (DCL) which are managed by ABAP Dictionary. So, a CDS entity or the enhancement of a CDS view is defined as source code in the CDS data definition.

To define an ABAP CDS entity, you first need to create a DDL source as the relevant development object with which you can use the standard functions of the ABAP Workbench – such as syntax check, activation, or connecting to the Transport Organizer. A CDS entity is defined in the text-based DDL editor of ABAP Development Tools in Eclipse/SAP HANA studio.

The following types of ABAP CDS entities are supported:

A CDS view is defined for existing database tables and views, or for other CDS views in ABAP Dictionary, using the ABAP CDS statement DEFINE VIEW. A CDS view serves to define the structure of an SQL view and represents a projection onto one or several Dictionary tables or Dictionary views.

Note:- SQL views and CDS entities are part of one and the same namespace. Therefore, you must assign different names for an SQL view and the entity.

Figure 1: Defining the CDS view in the DDL editor.

In figure:1 the CDS entity ZCDS_VIEW defines a projection onto the database tables scustom. The generated SQL view (ZcdsView) comprises the ID, the name, and the city of all entries.

a). The actual CDS entity (Zcds_View)

A CDS table function is defined using the ABAP CDS statement DEFINE TABLE FUNCTION and can be used as the data source in Open SQL read statements.

Note:- In contrast to the CDS views, the CDS table functions can be implemented using Native SQL. This implementation is done within an AMDP method of an AMDP class and is managed as an AMDP function by the AMDP framework in the database system. 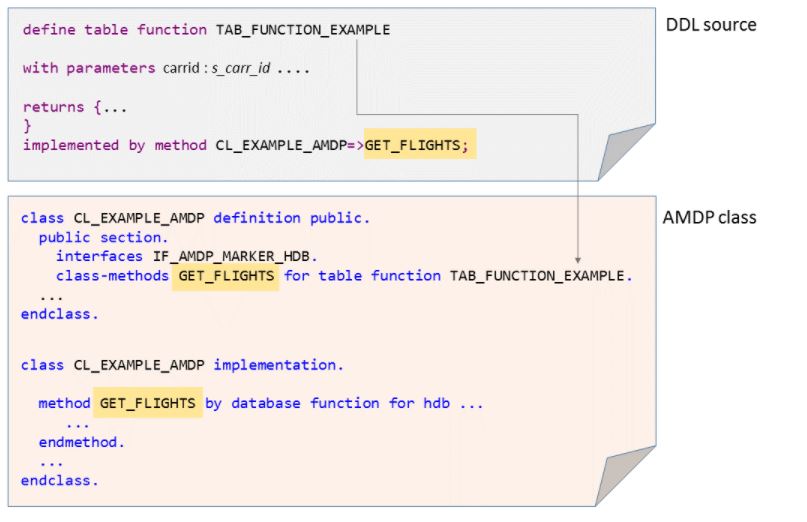 Note:- The name of the implementing AMDP method can only be specified in a single CDS table function (1: 1 relation).

ABAP CDS access control is based on the following:

Imagine we have written a nice CDS view, e.g. as follows:

Now, we can create a CDS role (as shown below) in a DCL source code for above view.

Now a question comes in mind:

What does this harmless looking code snippet using DEFINE ROLE can do?

Note: If you don’t want any access restriction, you must decorate your view with the annotation @AccessControl.authorizationCheck: #NOT_ALLOWED. Then and only then CDS roles are ignored.

When you activate a DCL source, SAP NetWeaver AS for ABAP generates the authorization views and fills the access control management tables with the required metadata. The roles are characterized as global internal objects in the ABAP Dictionary.

i have a requirement where i need to disable the field in the standard CDS View 'C_PurchaseReqnItem' and as per the below it is displaying the Field PurReqCreationDate in the "Manage Purchase Requisition Professional" Fiori App.

i had done the below code

But I am getting error "View field PURREQCREATIONDATE-C_PURCHASEREQNITEM already exists in parent object (DDL source )" could you please help how to handle this situation.

Try using the Metadata extension view instead of Extend view and write all necessary annotations for particular field as per requirement.

In the light of new CDS entity functionality (DEFINE VIEW ENTITY) released with ABAP on HANA 755 I see a lot of confusion between using CDS entity word alike in this blog for simple views/table funcs, and using CDS entities for real CDS entities after 2008 release. Possible it worth to correct old blogs about CDS for all the newcomers who is not yet familiar with CDS grain.