2-Tier ERP: Subsidiary as a production unit and internal supplier to Head Quarters

In this blog, let’s understand how a subsidiary can operate as a Production Unit to Headquarter with 2-tier deployment model by integrating S/4HANA Cloud with S/4HANA(OP)/ECC/any ERP

Here we are going to see how 2 tier approach can be leveraged for manufacturing scenario.

As a prerequisite, there should be master data synchronization between subsidiary and headquarters. Usually master data will be created in headquarter and shared across subsidiaries.

Let us understand the process flow in detail,

If Headquarter and Subsidiary have different master data, then we have option to maintain master data mapping in the SAP Cloud Platform (SCP) which may require some minimum development effort.

Once purchase order is created and released in headquarter a corresponding sales order will be created at the subsidiary automatically. Subsidiary will run the MRP to fulfill the demands generated by the sales order from Headquarter. MRP Run will generate planned orders at Subsidiary for the parts. These plan orders will be converted in to production order.

Production order will be released and missing parts will be procured by the Subsidiary directly if required. Subsidiary will carry out the Production in S/4HANA Cloud and confirm the produced quantities along with scrap if there is any. Finally, goods receipt will be posted against the production order.

Once the stocks are available at Subsidiary from Production process, Warehouse person at Subsidiary will create the outbound delivery against the sales order with Customer as HQ and goods will be issued. An Advance Shipping notification will be sent to headquarter automatically. Finally billing document will be generated and an invoice will be sent to headquarter for payment automatically.

Headquarter will receive the advance shipping notification (Inbound delivery) which might be helpful for their planning, and will post goods receipt against the inbound delivery once physically goods are received from the Subsidiary. Subsidiary invoice will be verified and subsequently the payment will be released for Subsidiary. In 2 Tier mode, the Subsidiary will get the information on receipt of materials and payments which are released for them.

Now with this 2 tier approach we have completely integrated end to end process with certain amount of automation which leads to error free process between headquarter and subsidiary. 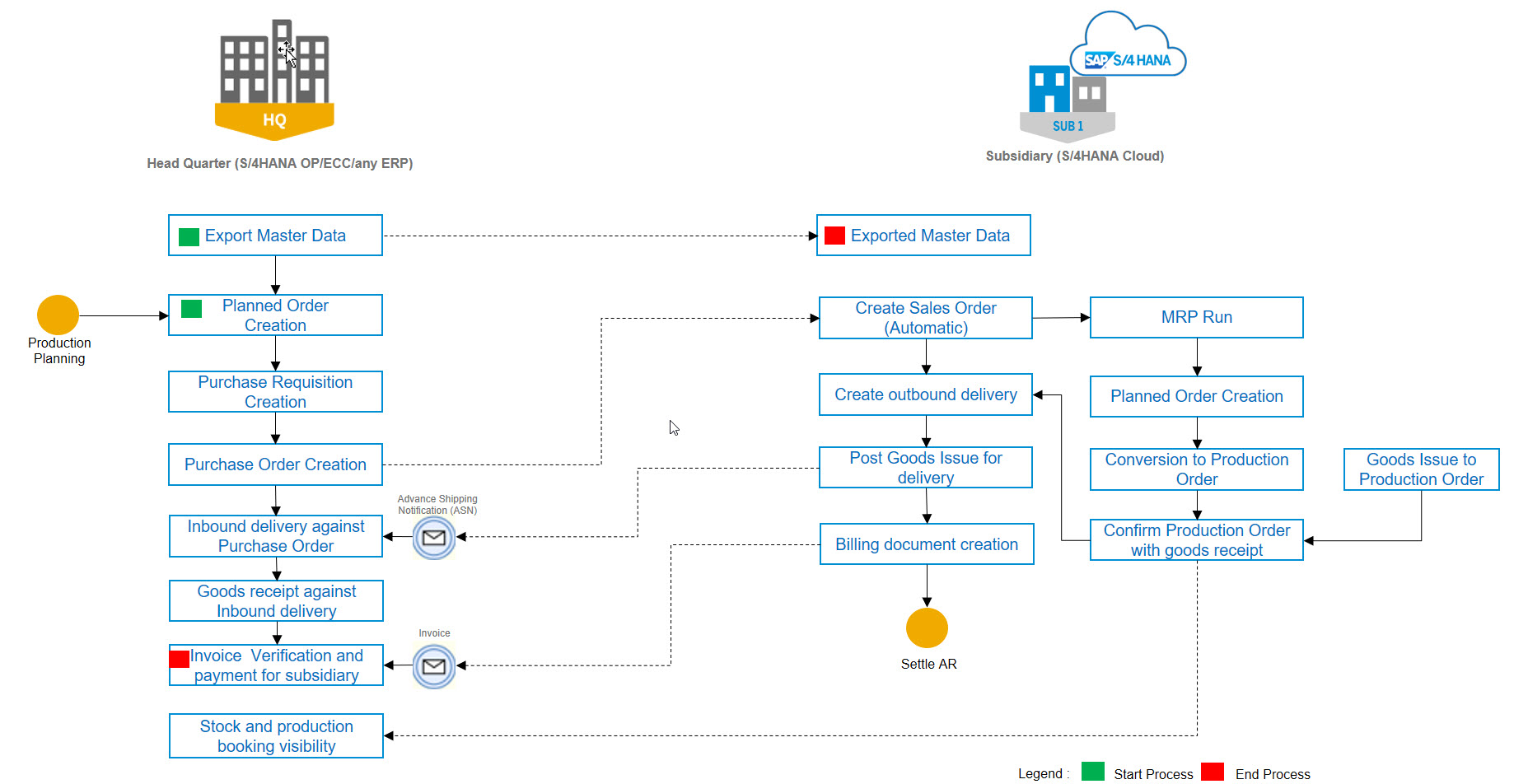 As Headquarter and subsidiary are inter connected, headquarter will have much visibility on subsidiary stock availability, production stages, production rejection, production variance etc., which help them to plan their production planning and deliver Finish goods to customer more efficiently.

By using the 2 tier approach of SAP, Organization can use the integration approach provided by SAP to connect with their subsidiaries running on S/4HANA Cloud and get the required information on the manufacturing process of subsidiaries with high visibility and operation controls, thus making the Integrated manufacturing more efficient.

Stay tuned to for the next blog in this series.

Thank you for posting this! Which part of this integrated scenario is already available with 1708?

The entire integration scenario is available from 1711 release.