Downsizing: A radical solution to save planet Earth? 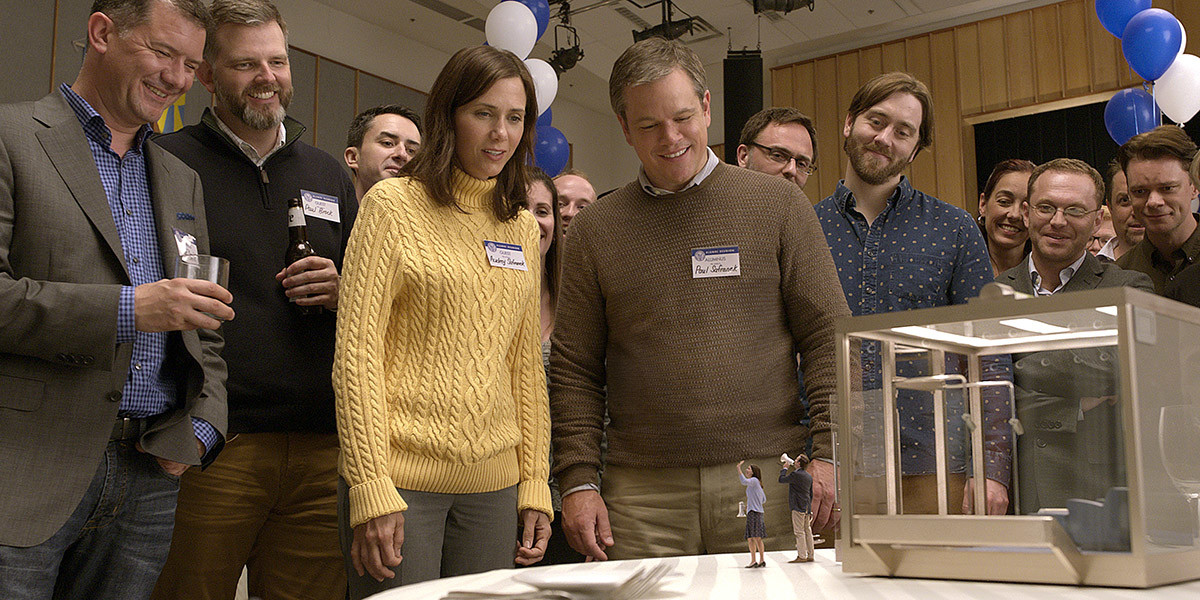 Alexander Payne’s social satire Downsizing, premiering September 11 at Toronto International Film Festival as part of Our Digital Future film series presented by SAP, will have you questioning your role in our crowded and unsustainable future.

Right now, that future feels closer than ever. With Hurricane Harvey battering Texas on August 25 and Hurricane Irma following close behind, people are wondering if severe storms will become the ‘new normal’ because of climate change. Meanwhile, recent tests on tap water samples around the world found that 83% were contaminated with plastic particles.

Reactions are mixed on such issues, with many scratching their heads, others skeptical, and some downright indifferent. After all, nobody wants to give up their gadgets, gizmos, and other gaudy wonders. Yet, our planet’s natural resources cannot sustain all that stuff for all the world’s ballooning population.

Among those who appreciate the dangers mankind presents to Earth and itself are the scientists, technologists, and engineers seeking solutions to minimize our impact on the planet, as well as the ethical activists and artists who hold up mirrors for humanity to confront its unsustainable path.

What are we to do?

Payne’s Downsizing explores tongue-in-cheek the idea of quite literally downsizing every human being. The film imagines a future in which scientists have found a way to shrink humans to five inches tall. The lead, played by Matt Damon, and his wife, Kirsten Wiig, decide to ’do the drop’, figuring they can help save the planet from human destruction and solve their financial woes (your money goes a lot further when you’re tiny). It makes one wonder, “would I shrink myself to save the world and still have it all?”

It’s not the first time a controversial scientific solution to ‘too many people on Earth’ has been imagined on the screen. The 1973 film Soylent Green [spoiler alert] is based on a dystopia in which human corpses are turned into green wafers and rationed out to those still alive. In the TV series Utopia, a protein is designed with the intention of sterilizing up to 95% of the population, leaving a perfect world in its wake for the survivors.

For now, such ideas for controlling population through scientific means remain firmly in the realm of science fiction; though the topic of population control is a favorite among conspiracy theorists, who say we might not know if governments chose to employ scientific methods.

In 1854, more than 100 years before we started taking climate change seriously, Henry David Thoreau was already writing of his resistance against industrial civilization by moving to the woods because he “wished to live deliberately”. Quartz called Thoreau the “original hipster minimalist“, saying his “experiment is the prototypical guide to the simple life”.

This is a difficult pill to swallow for most, though a small but growing number of people are taking inspiration from thinkers like Thoreau, as well as modern minimalists like Marie Kondo, placing less value on ‘stuff’. Time will tell if the movement can grow big enough to make a real difference.

Colonize on other planets

Stephen Hawking thinks humans only have 100 years to escape Earth and colonize a new planet, and the likes of Elon Musk are set on making it happen. Philosopher John Zerzan, however, believes destroying this planet and moving on to the next is no kind of answer. Whatever your take, it’s hard to imagine a future in which moving to a new planet or living on the Starship Enterprise is anything other than physically arduous and emotionally distressing, if it’s even feasible at all.

Electricity 2.0 is on its way. As I wrote in a previous post, digitization and decentralization of the grid, the rise of renewable sources like solar and wind, the impact of the Internet of Things and more are coming together to reshape the utilities space. Furthermore, electric vehicles are building momentum as a solution to our reliance on fossil fuels to get from A to B. Created with eco-sensitivity, this new power infrastructure could significantly reduce greenhouse gas emissions.

Just as important, companies are exploring more sustainable practices for food and goods production, as is seen with circular economy concepts. These solutions aren’t radical, and look the most realistic and promising, if you take human nature for what it is. Nevertheless, it will be a monumental challenge requiring progressive government and corporate policies, plus a collective shift in our cultural mindset.

Whether it’s reducing consumption, embracing sustainable technologies, or shrinking ourselves to five inches tall, there is no doubt we need to find a way to downsize our human footprint. As Hurricane Harvey and Irma might imply, along with mounting evidence elsewhere, it’s time to act, one way or another. The big question is, how?

Find out more about the Our Digital Future film series presented by SAP at TIFF 17 here.