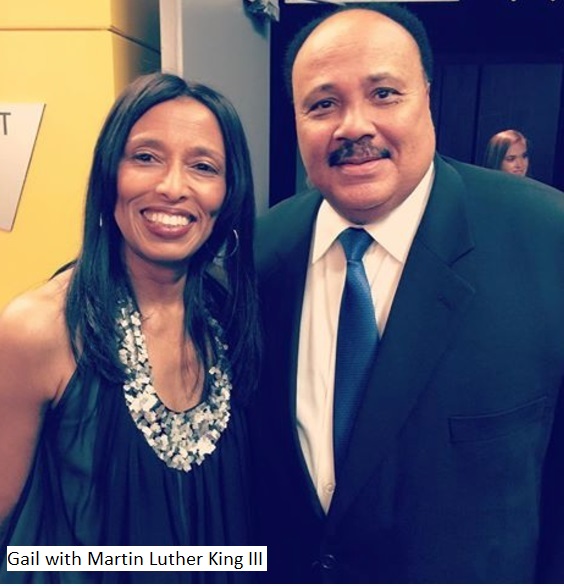 My first conversation with SAP digital and social channels senior director Gail Moody-Byrd, a black woman based in the heart of Silicon Valley, fell on the day a Google engineer was fired for his widely-shared criticism of the company’s diversity initiatives and ideological monoculture.

It was a story we had both taken a keen interest in, at times threatening to overshadow what we had intended to discuss: a black woman’s experience living through the Civil Rights Movement and forging a career of academic and professional success.

What made the Google memo so relevant to our interview, in Gail’s mind, was that it reignited the debate over whether diverse groups are given unfair advantages by the attention received through diversity and inclusion initiatives. As someone whose life trajectory markedly changed because of the opportunities presented to her as a young adult, she rejects the notion of unfair advantage, instead saying such initiatives expose people to opportunities they otherwise would not have seen organically, be it through family, friends or neighbors.

Following the racially-charged protests and counter protests in Charlottesville, VA the very next weekend, Gail and I agreed we would be remiss not to speak again to update our interview given this new, broader context. She said the incident reinforced what she had expressed in the wake of the Google memo: there is a deep historical context of discrimination against certain groups – be they women, blacks, Jews, Muslims or others – that must be considered to understand why diversity and inclusion programs are so essential to leveling the playing field.

Gail sees her story as an example of how a diversity initiative can change lives and create a new trajectory for a family’s happiness, success and wealth.

Adam Winfield: Tell me about the opportunities you were given, and why they were so important for you.

Gail Moody-Byrd: I’ve studied my ancestry through family research and 23andMe – I know some threads of my family history back to the 1700s. I’m clearly the descendant of slaves. 70% of my DNA is from West Africa, as I would expect, but the other 30% of my heritage is English or Scottish, from a person born around 1800 – likely a slave owner in the Southern United States. Considering the immerse obstacles my ancestors faced, I am proud of the progress I have made to fully participate in this economy – attending one of the finest business schools in the world and working for SAP, the largest business software company.

My elementary school – in Ohio, where I was raised – was fully integrated: 50% black and 50% white, and I went to a predominantly white Catholic high school. After that, I studied economics at Spelman College in Atlanta, a historically black women’s college founded by the Rockefeller family (a philanthropic effort, originally to educate freed slaves). It was part of the Atlanta University Center, where I was immersed in black history and had the quintessential HBCU [historically black college and university] experience with classmates like Martin Luther King III (Martin Luther King’s son) and Spike Lee.

During my Junior year at Spelman, I interviewed for an internship for minority college students at Chase Manhattan Bank headquarters in Lower Manhattan, New York City. The program’s purpose was to cultivate a more diverse pool of potential bank executives by exposing qualified students who would otherwise not have had exposure to this type of opportunity. Our summer included a luncheon meeting with David Rockefeller, evidence that the program had support from the organization at the highest levels. I was suddenly living in Manhattan, working on Wall Street, and a whole new world seemed accessible, achievable and within reach. It was pivotal moment for me. There was no way I would have found my own way to this level of opportunity had Chase not extended its recruiting effort to include my historically black college in Atlanta, though they were based in New York.

After college graduation and two years in banking with Bank of America (back in New York), I was accepted to Harvard Business School (HBS) to obtain my MBA. This was the ultimate opportunity to obtain training in real world decision-making from an elite institution that has shaped businesses around the world for over 100 years. HBS did a good job of building an academic system where there was a level playing field and one could succeed based on merit.

No one else in my large extended family had achieved such a thing. I am the granddaughter of a coal miner and a steel mill worker. I’d accomplished this early success largely on my own, with a little nudge from that summer internship program at Chase. It’s propelled me to achieve many other milestones in my career. Now, my 14-year-old son – my next generation – will have these broadened educational and professional aspirations as his ‘lived experience’ from birth and see them as accessible, with the option to participate. This is how we move a minority group from a culture of dependency to independence. “It’s not a handout, it’s a hand”, as that advertising slogan said years ago.

AW: You mentioned you grew up during the Civil Rights Movement. How did that shape you?

G M-B: I grew up in a household that was very politically aware, attuned to racial discrimination, national politics and civil rights causes in the 1960s. I was radicalized by what I saw, which bred a race consciousness in me that is an essential part of my being. Being black in corporate America is a form of modern-day freedom fighting (if one chooses to acknowledge it), where we represent our cause by being present, performing at high levels and seeking opportunities. Despite all the time that has passed since the core civil rights era, we have still not achieved a post-racial society – there’s work to be done to achieve the dream Martin Luther King spoke about.

AW: Do you think there’s real hope for a post-racial society?

G M-B: I do have experiences that cause me to remain hopeful, especially as I observe the millennial mindset. For example, recently I took my son to see a Kendrick Lamar concert (popular black rap artist). The audience was millennial and very diverse – 90% non-black. A huge segment of the audience knew every song word-for-word. They didn’t see black or white or brown; they were connected by the hopefulness of his message. These kinds of experiences give me reason to be hopeful, to believe we can be more united in the future, despite the divisiveness getting all the media coverage in 2017. 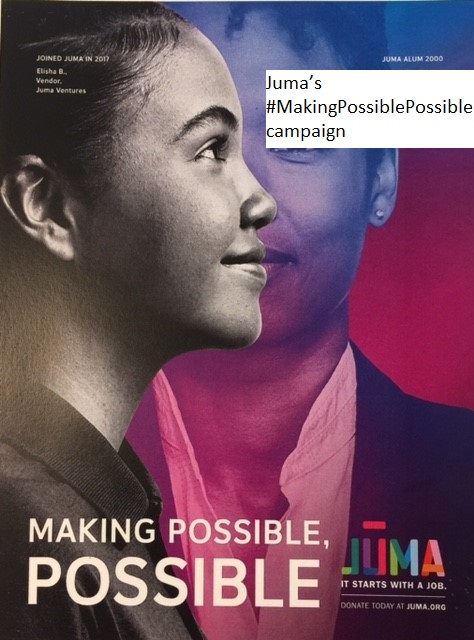 AW: You serve on the board of Juma Ventures, a non-profit that gives youth from under-served communities their first work experiences. What has that taught you?

G M-B: As I moved through my career, there were many advisors and mentors who were role models for me, helping me envision myself as a successful professional. It is so rewarding to watch young people’s lives unfold as they begin to benefit from programs that provide exposure to jobs, education and professional career development that may not have naturally come through their environments.

Yes, I’m on the Board of Juma Ventures (www.juma.org), whose current marketing campaign (which I worked on) is #MakingPossiblePossible. I get to see the impact of our programs firsthand. I met a young woman last week, Lulue Burton, an Enterprise Account Manager at Oracle, whose first work experience came from being in the Juma program in 1997.

There she was provided a consistent positive environment, exposure to like-minded peers who shared her aspirations, and options beyond her economically-challenged neighborhood. That’s what diversity and inclusion programs do. Lulue happens to be featured in Juma’s campaign material, as a shining example of yet another youth who benefitted from an opportunity early in life.

AW: Earlier you brought up the issue of unconscious bias. Have you experienced that, and do you know when it’s happening?

G M-B: When one is raised with the consciousness that racial discrimination is a fact of life, that perceptions can be based on certain assumptions and stereotypes, your antenna are always up for hints of unconscious bias.

It’s very subtle – it comes through in feedback containing language more about behavior than achievements – things like that. So yes, I know when it’s happening. What I’ve learned to do is activate a heavy dose of emotional intelligence. I’m deliberate about how I communicate. I’ve accepted that unconscious bias exists and calibrate my behavior in recognition of it. Sometimes it’s successful, sometimes it isn’t. 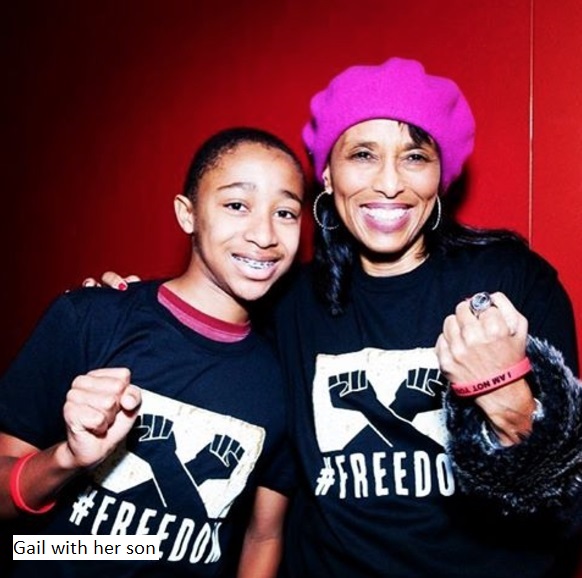 AW: So how do we fight unconscious bias and stereotypes?

G M-B: By building honest and open relationships with colleagues to enable frank conversations about it. SAP is a highly multicultural organization, which means awareness of communication across cultures is critical.

We all have predetermined assumptions about people that we must acknowledge and address. Diversity and inclusion education is key. A fundamental element is creating a climate of “real talk” that engages everyone.

A fundamental blind spot for people opposed to D&I programs is this: large segments of people are not achieving their full potential because they lack exposure to opportunities that are attainable but not visible. If they’re given that chance, some of the problems we have today will remedy themselves over time.

The longer we exclude diverse groups based on bias, the longer societal dichotomies will exist. I’ve tried to live my life as my own personal, radical statement. I’m not out on the streets protesting, but rather seeking to do excellent work every day as a way of personally advancing the diversity and inclusion conversation.

This interview has been edited and condensed.