S/4HANA on the Google Cloud Platform: Multi-cloud the good, the bad, the ugly – Part 2

This weblog is the second in the series “S/4HANA on the Google Cloud Platform: Multi-cloud the good, the bad, the ugly” which showcases our experiences of the multi-cloud journey. This weblog will concentrate on “the bad” parts of converting an existing fully operational S/4HANA 1610 system from MS Azure to the Google Cloud Platform infrastructure as a service. You can view the first part of the series here.

Since a typical S/4HANA greenfield installation on GCP would be far less representative of reality and too much like an academic, technical pursuit – I decided on moving a fully operational S/4HANA system from an existing cloud provider, but this would work equally well from an on-premise perspective.

Three main providers of business cloud services for SAP customers (AWS and Azure and GCP) have significant differences not only in pricing but also in how they name and group their services, so we decided to facilitate a simple comparison based on the following criteria:

3 – Administrative Capabilities and performance of the platform in S/4HANA “run mode.”

4 – Other SAP services available on the platform

Setting up a GCP account couldn’t be easier if you already have a Gmail account. You start off with cloud.google.com and extend your existing account to incorporate Google Compute Engine services.  The GCP console UI will feel familiar to users of Google’s other products – it shares the same Material Design principles, making all operations easy to navigate. Google currently offers a $300 sign-up credit which can be used for any Google Cloud Platform service over a 12 month period. This makes an SAP trial on GCP a very attractive proposition for most technically minded SAP practitioners. In fact, Google and SAP have packaged up a HANA developer edition for those who wish to get started on the GCP in under 2 hours.

Although interesting, specific pricing comparisons between the different IaaS platforms goes beyond this weblog. Make sure you look into per minute billing, Committed use discounts and the Sustained Use Discount (SUD) offered by Google – this innovative pricing approach offers an automatic discount for every incremental minute you use an instance over 25% of a month.

Setting up Virtual Machines is a straightforward proposition using the GCP. Unlike AWS and Azure, you are not limited to fixed pre-configured machine sizes, you can build a custom machine and pick the best combination of Cores, Memory and Disk space to suit your needs. 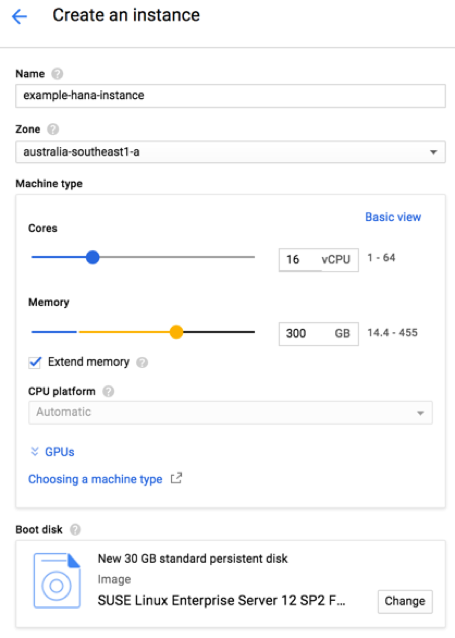 Moving multi-terabyte SAP systems would normally involve one or more of the following migration mechanisms:-

For my data migration, I opted for the GCP promoted VM Migration Service powered by CloudEndure, but would consider the Google Transfer Appliance (or the AWS Snowball-Edge if moving to AWS) should my database exceed 40 terabytes. The CloudEndure/GCP VM Migration Service allows you to migrate existing virtual and physical servers into GCP.

Upside of the CloudEndure Migration service 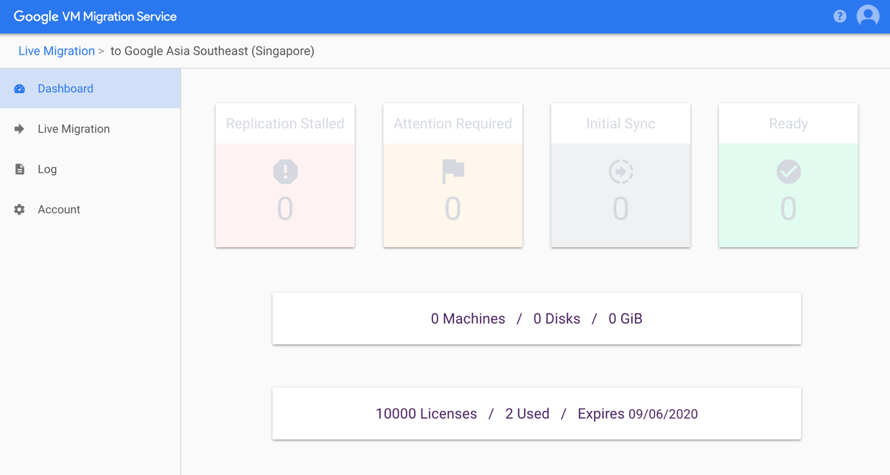 3 – Administrative Capabilities of the platform in S/4HANA “run mode”

The GCP console provides native integration with the Stackdriver monitoring software to provide insight into the health, performance, and availability of GCP based applications. Stackdriver plugins can be used on other cloud platforms to combine metrics, logs and meta data for true reporting in a multi-cloud environment. 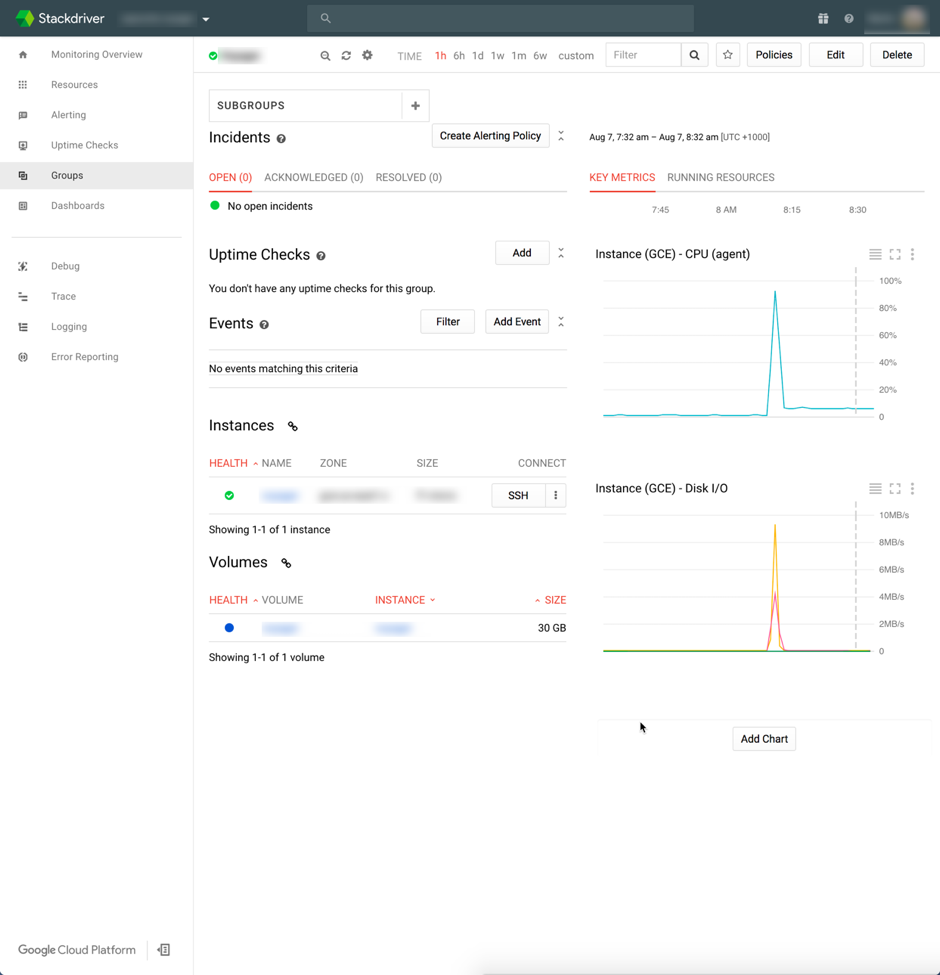 My favourite administration feature on the GCP was the ability to interactively access an instance’s serial console. In my case, incorrect entries in the boot sequence of my VM caused a failure to boot the operating system. I was able to repair the problem myself by using the GCP serial console – this would have required a support ticket and some waiting on the Azure and AWS platforms.

The performance of the S/4HANA system on GCP was the most impressive part of my comparison. GCP is the first IaaS provider to control Compute, Memory, Disk and Network. The Sydney GCP data-centre launch in June 2017 along with investment in new submarine cables connecting Singapore to Sydney make the proposition of running any SAP enterprise workload on GCP a logical alternative. We found system start up times to be impressive and the reduced latency made accessing the Fiori Launchpad on our migrated S/4HANA 1610 surprisingly faster with no additional profile tuning.

You can further optimise network performance by choosing the most appropriate Google network service tier. The Premium Network Tier provides a network uplift at a small price increment.

4 – Other SAP services available on the platform 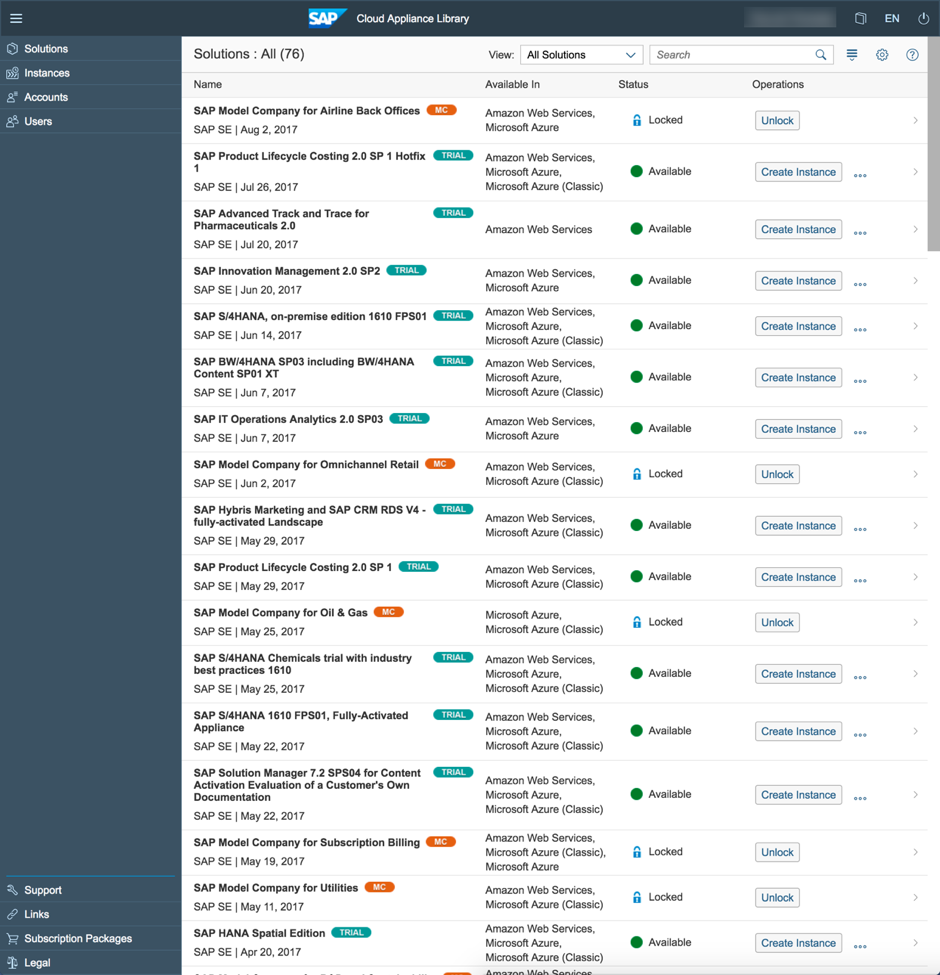 By contrast, there are several best practice documents for running S/4HANA on both Azure and AWS readily available. The Azure team offer several AzureCAT (Customer Advisory Team) guidance documents. Over time, I hope to see growth in similar content in the GCP space – but at the moment you will have to go it alone somewhat. In fact, there are only 9 SAP Notes which mention the GCP, the most useful of which is SAP Note 2456432 which lists the 6 supported non-HANA and 2 certified HANA machine configurations. By contrast, there are over 100 SAP Notes and 12 certified HANA machine configurations for the AWS platform. 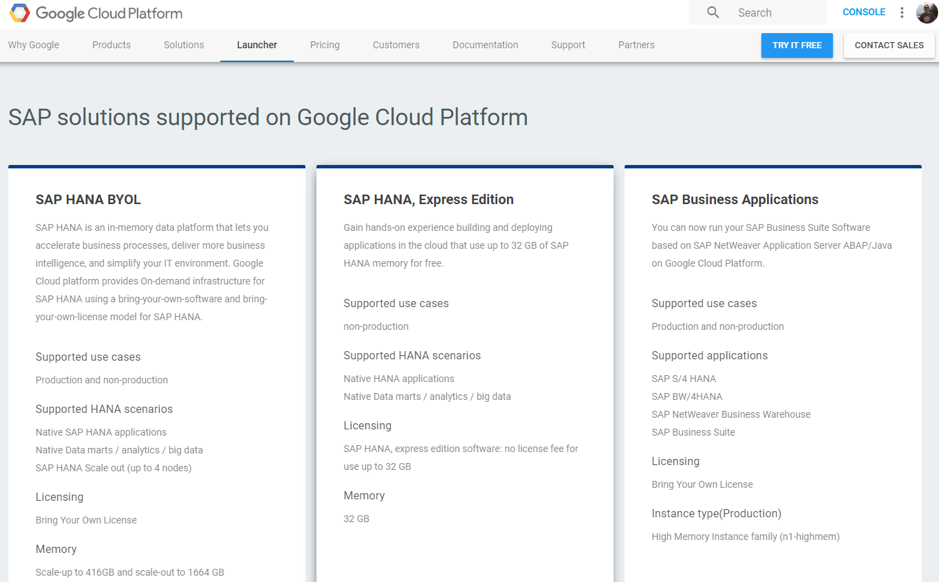 My experience on the Google Cloud Platform Compute offering running S/4HANA was far from bad. If anything I find the GCP shows strong promise as a viable competitor alongside AWS and Azure for running SAP applications on IaaS. Should SAP release Cloud Appliance Library images on GCP I feel it will be easier for customers to make an informed decision by taking GCP for a test drive before committing to an effort to migrate or greenfield their own installations. While there is little documentation provided by SAP available at the time of writing this post for SAP on GCP, I feel if you are familiar with AWS you’ll be able to pick up the majority of GCP’s features intuitively and make best practice decisions for SAP on your own. GCP also have a 6 hour on-demand on-boarding course for AWS Professionals (sorry Azure users, no on-boarding course available for you at this time).

Based on my personal experiences evaluating GCP, AWS and Azure I’ve made a leader-board chart summarising my views. Would love to hear your opinion. 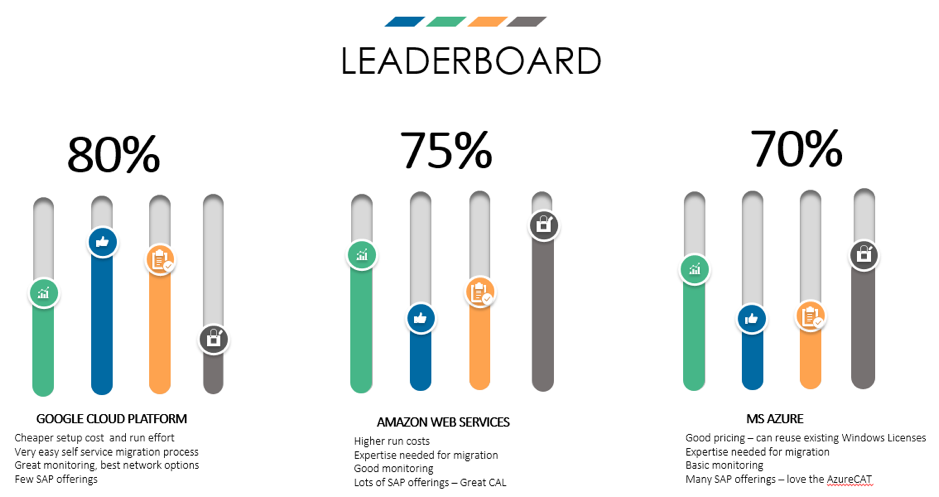