The following example is an extension of the example described here. If you want to follow the example in detail you might want to read the other example first. Compared to the previous example an additional filter is defined on node “all”. The filter removes all ARTICLES with color “blue” and therefore the node is renamed to “noBlueStuff”. The definition of the filter is shown below

Filter on node “noBlueStuff” that removes all articles that are “blue”

Analogously, the calculated column is adapted so it reports now to be no blue stuff:

See the full model below 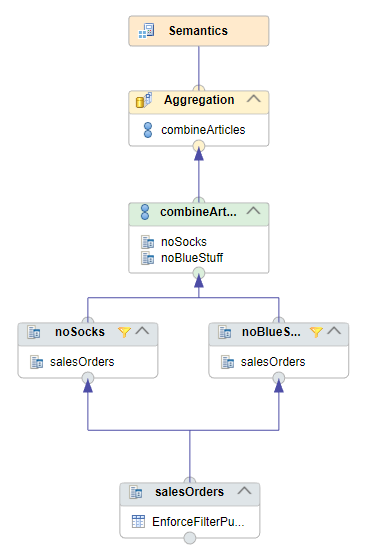 When the “Ignore Multiple Outputs For Filter” flag is checked the filters will both be applied at node “salesOrders”. This means that neither “blue” ARTICLEs nor “socks” will be fed into later nodes. Therefore, the output will have no “socks” and no “blue” ARTICLES as shown in the screenshot below:

Output when filter push-down is enforced: neither “socks” nor “blue” articles are shown in the output as they are filtered before reaching the two consuming nodes.

As you can see in this situation different results are obtained depending on whether filter push-down is enforced by the flag or not. Therefore, a good understanding of the flags is requried.