Many customers are using SAP ABAP or Java application servers installed in a system architecture based on the Windows Server Failover cluster framework. This high availability architecture is well-known and has been proven to work for years. Unplanned hardware failures and maintenance activities can be covered with minimal impact for the system availability.
But in some scenarios, it is necessary to transfer an SAP system from one Failover Cluster to another one. That could be the case in these situations:

As far as I know, there are many guides and best practices (like the official SAP installation guide or this blog)  written on how to install SAP in a Windows Server Failover Cluster. But I don’t know a “best practice documentation” on how to move an SAP system from one cluster environment to a new one. I will try to change this with this blog.

As a starting position, I will assume that we do have an already clustered SAP (A)SCS instance up and running. Of course, this method would work in a similar way for every clustered SAP ABAP or Java system. In this example, I am using an SAP ABAP system called “RIX”. In the beginning, RIX is running on a Windows Server 2012 R2 cluster, consisting of the nodes wsiv8050-1 and wsiv8050-2. It’s a very typical setup, as it is described in the SAP ABAP Installation Guide (find an overview of SAP NetWeaver Installation Guides here[Link]) and it looks like: 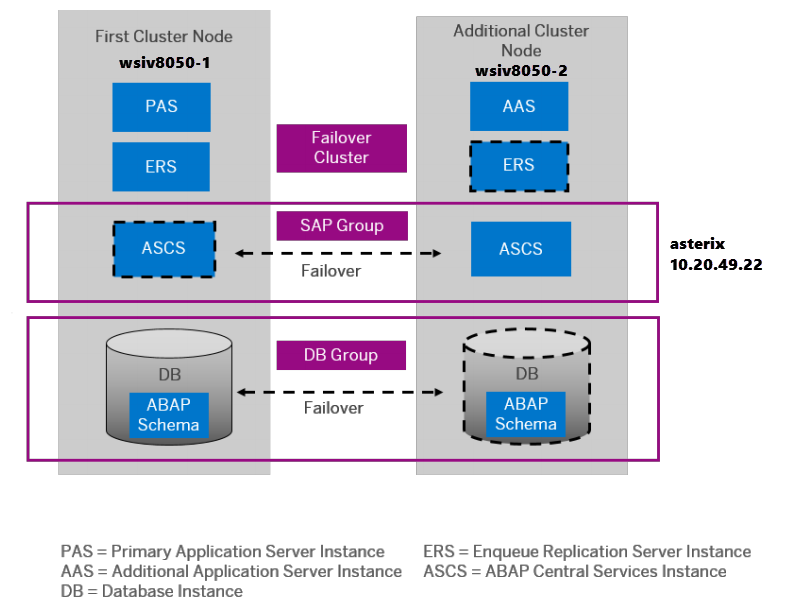 From an SAPMMC perspective, the system is structured as shown in the following screenshot: 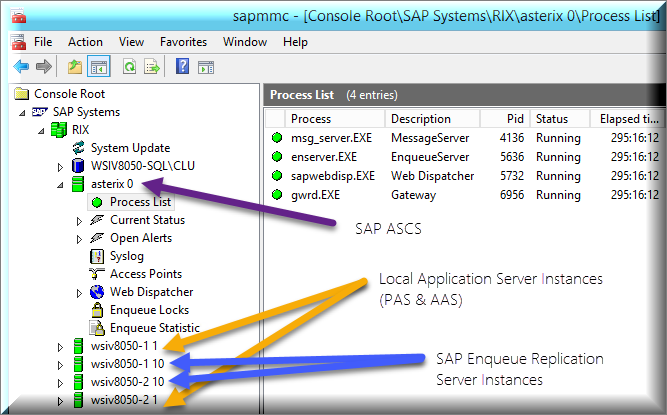 While the existing RIX system is running without any interruption on the current environment, start to build the new landscape. In a first step, we must configure the new Windows Failover Cluster. That means:

After the new cluster has been prepared for the SAP installation, start SWPM on the first new cluster node to install a new “First Cluster Node”. Use the very same SID for the new system (RIX in this case) and the identical instance number for ASCS and ERS as you have used in the old clustered environment. For the SAP Network name, it is obviously impossible to choose the same name as it is in use in the existing system to avoid a naming collision. In my example, I will use “obelix” instead of “asterix” as a temporary hostname for the SAP Virtual Instance. 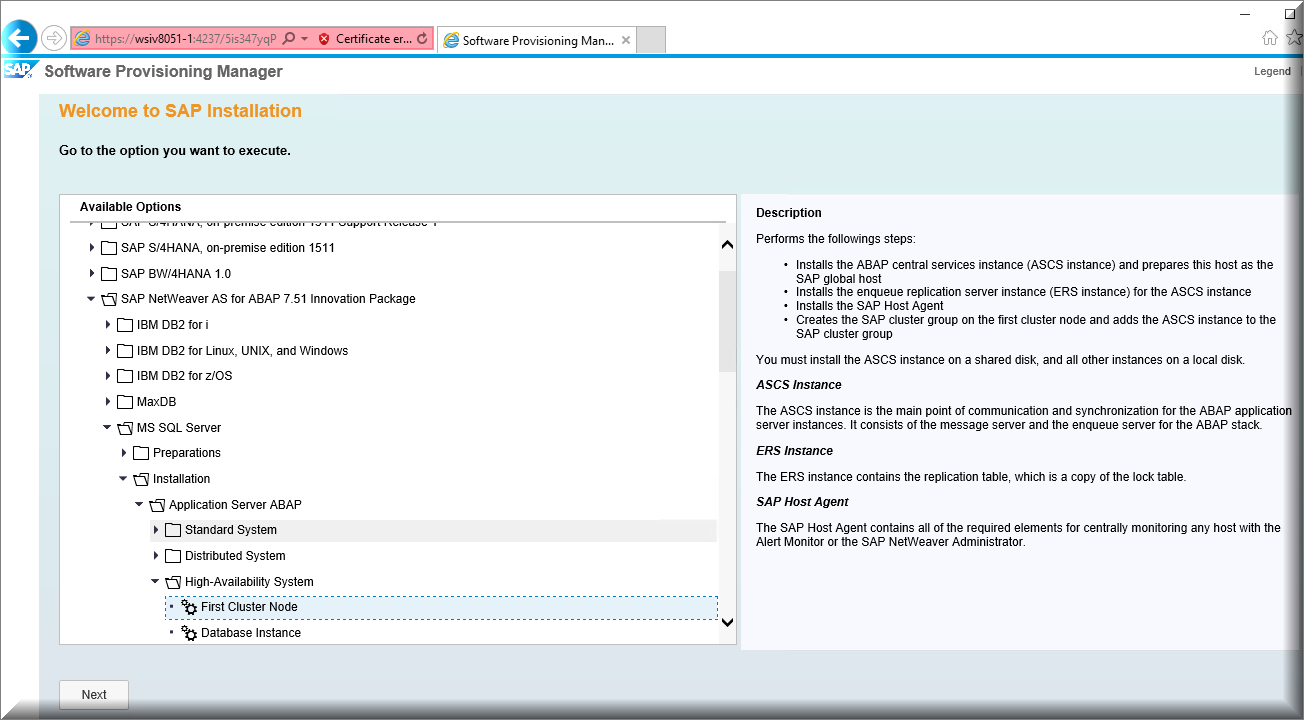 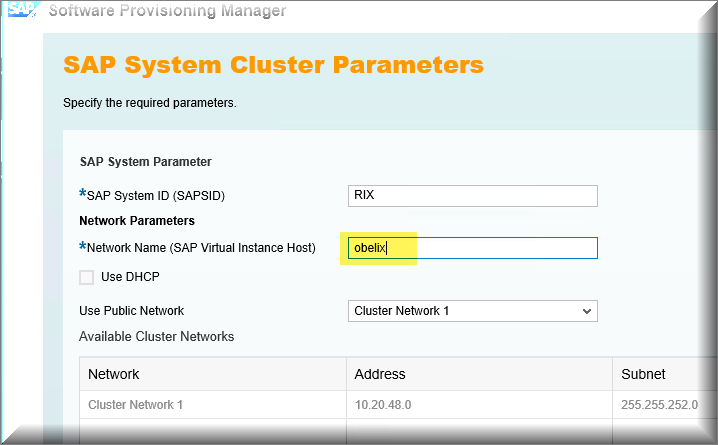 If the clustered ASCS has been installed successfully on the first server, continue to install the Additional Cluster Node on the second cluster server member, following the SAP installation guide using SWPM. The following screenshot shows the result in the new environment. SAP ASCS is installed with the (temporary) hostname “obelix”, the ERS instances are locally deployed on the new Windows Server nodes wsiv8051-1 and wsiv8051-2, and the SQL Server database software is already up and running. Now is the perfect point in time to test the failover capabilities. In addition to that, you can now install all the required Windows patches, upgrade the SAP kernel and migrate everything from the former cluster nodes to the new one, e.g. environment variables, additional 3rd party applications and so on: 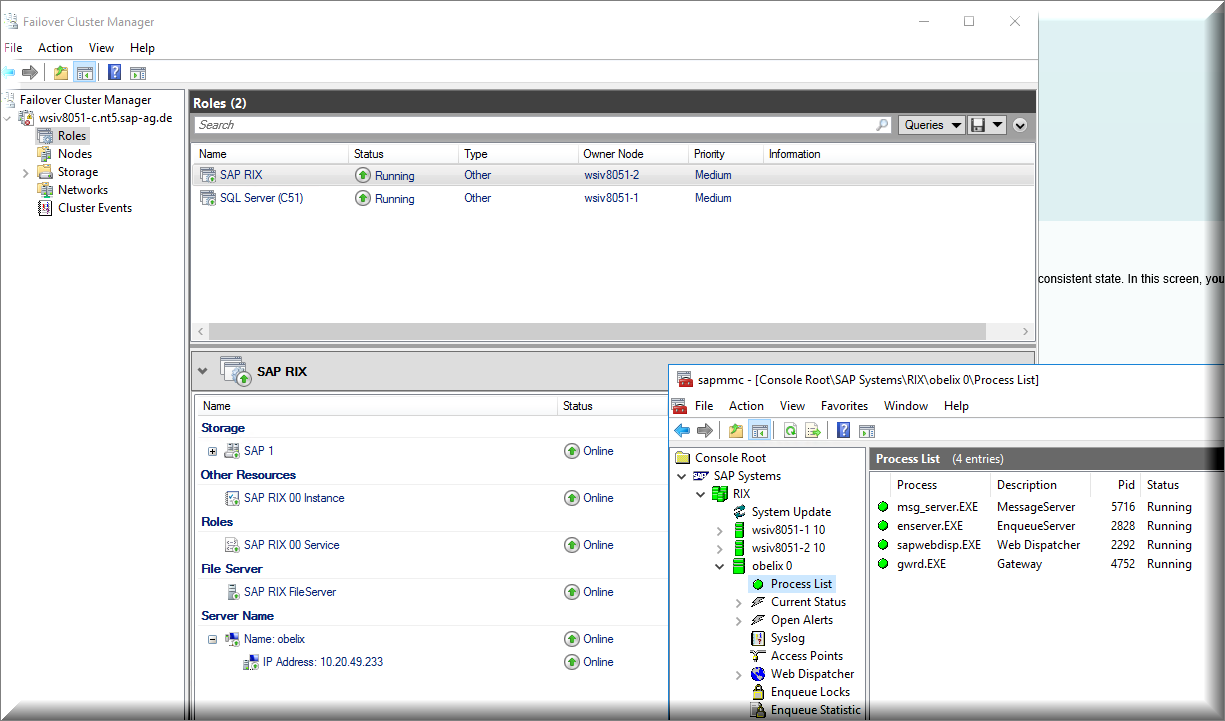 It’s also recommended, to now sync all filesystem content that is in the current \\asterix\sapmnt to the new \\obelix\sapmnt share. This could include, for example, certificates, SAP transport system related content, and logs. Additionally, transfer content from the profile folder and merge them into \\obelix\sapmnt\RIX\SYS\profile.

From an SAP cluster perspective, everything is now prepared to start the move. But in my environment, it is advisable to start transferring the database to the new SQL Server instance now, because I plan to move both components, SAP and database in one short downtime from the existing environment to the new cluster. To keep the necessary downtime as short as possible, I will utilize the standard backup- and restore capabilities that are offered from the SQL Server DMBS to build up a “hot stand-by database”. To do so, there are many conceivable approaches. Read the existing database software documentation for your DBMS to find the best way for your setup. For SQL Server, a manually initiated “transaction log shipping”, as described here, is a sufficient feature to achieve the desired goal.

To do so, I combined this TSQL commands and executed them in SQLCMD mode in the SQL Server Management Studio as Query 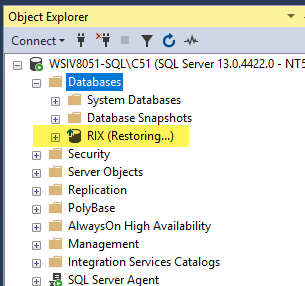 Do the magic: Move the ASCS and DB instance in a short system downtime

As always, it is mandatory to have a full system backup before doing maintenance on a productive SAP system. If everything is well-prepared, the risk to need to roll back is quite low, but it’s always a possible solution to roll back and postpone the maintenance activity.

At this point, you have a clustered ASCS instance, a clustered SQL Server database instance, and local ERS instances running on both cluster environments. Your ABAP application instances are still installed on the old/existing cluster.

If your downtime window begins, stop – as always – all interfaces, your batch jobs and log off all dialog users.

At this point you have successfully switched to the new ASCS instance and database on the new cluster!

After everything is finished, you can install two additional SAP application server instances on the two new Windows Server 2016 cluster nodes to the existing system RIX. Of course, these SAP instances are installed on local disks. Thus, your final system architecture could look like: 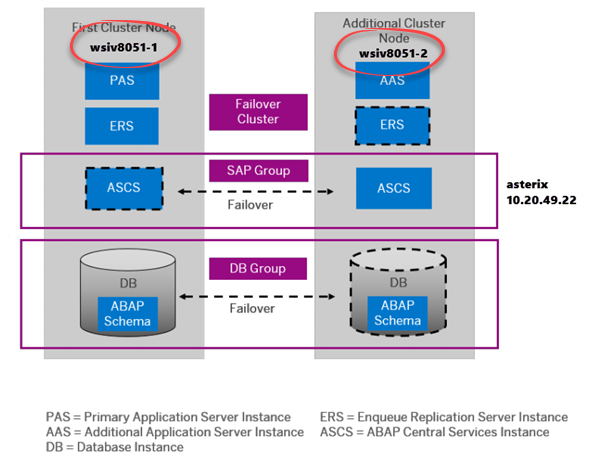 The difference to the starting architectural overview is marginal – only both node host names are exchanged (from wsiv8050-1/ wsiv8050-2 to wsiv8051-1/ wsiv8051-2). And of course, the new cluster nodes are completely independent from the former ones – they could be using a different Windows Server Version or changed server location (e.g. even operated in an IaaS environment).

Please consider this blog as a source of inspiration. It could be very beneficial to follow such a guidance instead of obtaining knowledge by doing. But I strongly recommend to test this procedure in your environment before each production downtime. After you finished the “obelix” installation, you could perhaps move this environment to an unused dummy name, for example “idefix”. That will lead to the certainness which is necessary to do all the of steps systematically during the (short?!) downtime of your productive system. 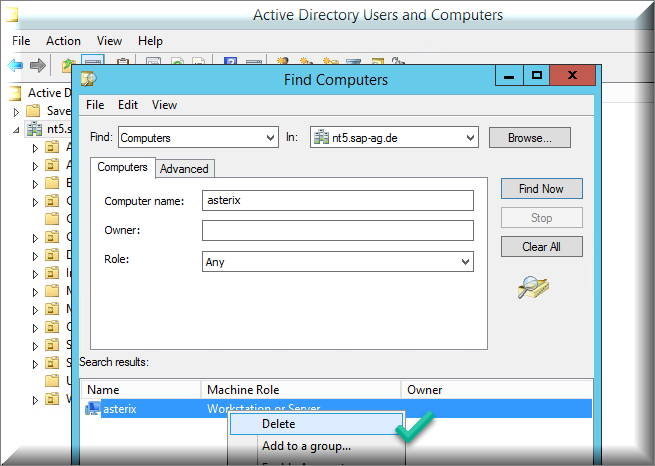 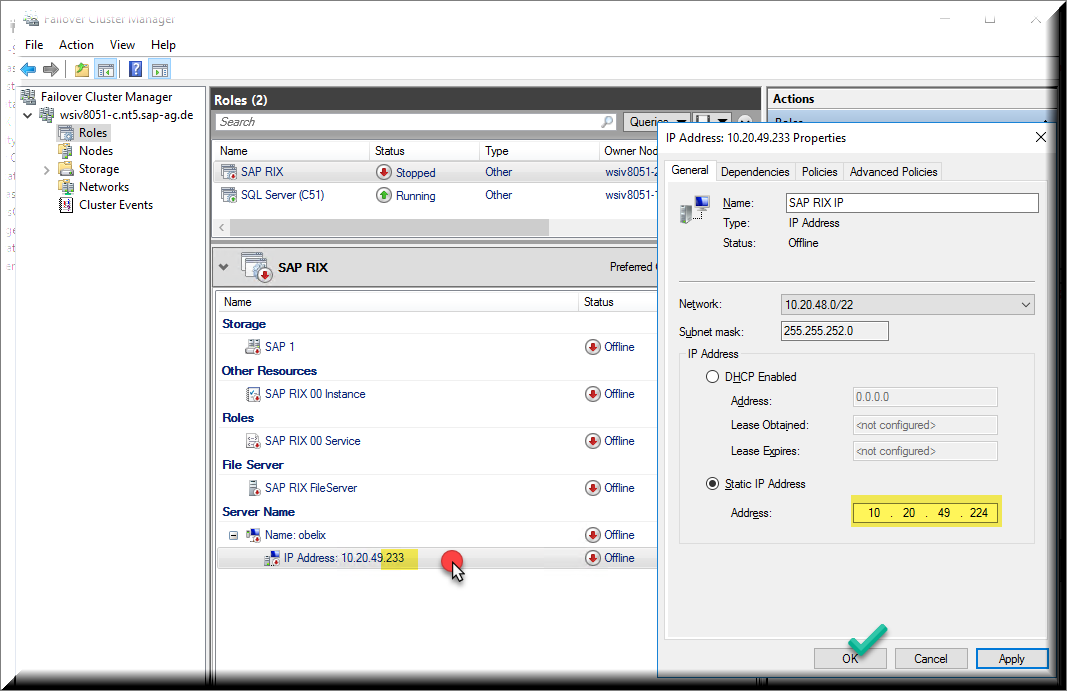