If you prefer to read this article in German, you may find a translated version under this link.

The supply chains of automotive companies are usually fully automated. Instead of using paper-based processes, OEMs (original equipment manufacturers) and their suppliers communicate using electronic data interchange (EDI). Thereby, messages are sent from one IT system to another IT system without any human intervention.

In the following article we examine the most important EDI processes in an automotive supply chain. We show which EDI document standards may be used and which IDoc types may be chosen in order to import and export the relevant information to and from an SAP ERP system.

The following Figure gives a brief overview of document types, which are being exchanged between an OEM, its tier 1 suppliers and the tier 2 suppliers. The process automation may of course also include tier 3 suppliers, tier 4 suppliers, etc. 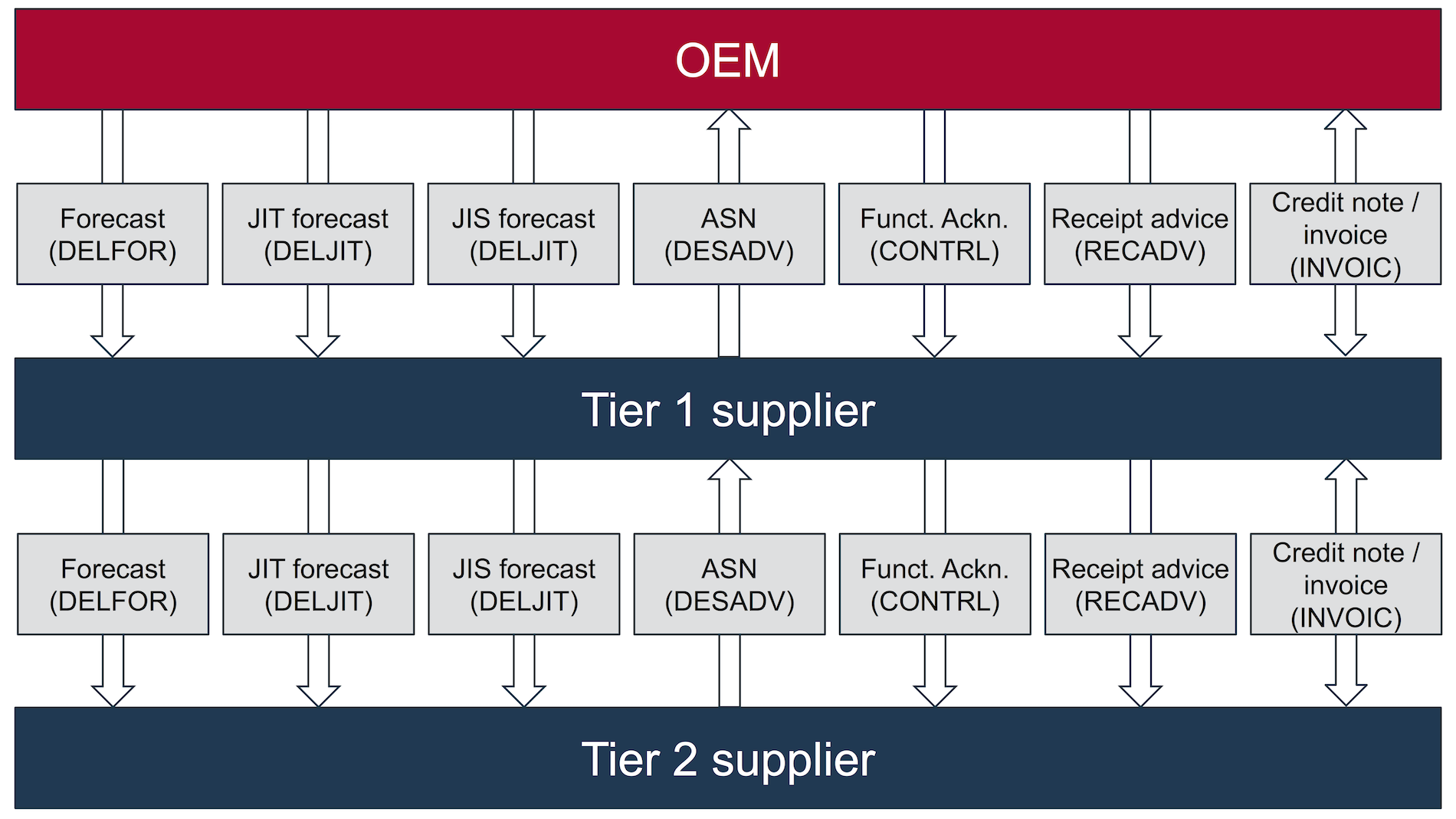 Click here for a high resolution version of the image.

In addition to a forecast, an OEM issues JIT forecasts, which define finer grained demands for a specific part. Oftentimes the JIT forecast also contains additional information such as the exact unloading point, where the goods shall be shipped to or delivery timeframes in which the goods must be delivered to the OEM.

In case just-in-sequence (JIS) processes are employed, an OEM may issue JIS forecasts. These forecasts are used to communicate the exact sequence in which certain parts must be delivered to the OEM.

After a supplier has dispatched the goods from his production site, he must issue an ASN (advanced shipping notice) message. Using the ASN message the supplier pre-informs the OEM about an upcoming delivery. Usually, the ASN contains information about pallets, the number of used boxes, the used serial numbers for pallets and boxes and so on. The serial numbers are also attached as labels to the pallets and boxes. Upon arrival of the goods at the OEM, the OEM may quickly scan the labels and compare the scanned information with the information contained in the ASN.  Thereby, any deviations in the delivered goods may easily be recognized and the necessary actions may be taken.

Using a functional acknowledgement an OEM may confirm the receipt of an ASN to the supplier. Depending on whether the ASN could be successfully processed by the OEM or not, the supplier receives a positive or a negative acknowledgement.

As soon as the shipped goods are collected and processed at the OEM’s site, a confirmation message may be issued. Using a receipt advice, the OEM communicates back to the supplier how many delivered goods were received.

Finally, the payment details are communicated either using a credit note or an invoice message.

In contrast to for instance GSM (Global System for Mobile Communications – the worldwide standard for mobile telephone communication), there is no single global EDI standard. Instead there are different standardization organizations, issuing different standard versions. In the following we dwell on the most important ones.

UN/EDIFACT is an international standard for electronic data interchange, developed by the United Nations. The standardization work takes place within UN/CEFACT. UN/EDIFACT is one of the most successful EDI standards and is used in various industries worldwide. The standard per se is quite verbose and almost never used in its plain version. Instead different industries and companies have defined their own subsets of the generic standard.

ANSI ASC X12 is an EDI standard, which is developed by the American National Standards Institute. The subcommittees of ANSI develop EDI standards for various industries and domains such as finance, transportation, insurance, supply chain, etc. Today, ANSI ASC X12 plays an important role in EDI processes in North America, where it is the standard of choice for most industries, including the automotive industry.

VDA is the acronym for “Verband der deutschen Automobilindustrie” (association of the German automotive industry). Among other activities VDA issues a set of EDI standards, which are used for the exchange of business documents along the automotive supply chain. VDA is widely used among German car manufacturers and their suppliers.

Odette International Ltd. is a not-for-profit organization and a pan-European collaboration and services platform for the automotive industry. Among its members are various national automotive associations such as VDA (Germany), GALIA (France), etc. The goal of Odette is to achieve consensus solutions for the various challenges in the automotive industry, thus, ensuring maximum efficiency of supply chain processes. As part of its standardization work, Odette develops the Odette EDI standards.

In the following we provide a comparison table, showing the different EDI message formats and types, which may be employed for the processes in the automotive supply chain. The two rightmost columns show the IDoc basic types and IDoc message types, which may be used in order to import and export the relevant information in/from an SAP ERP system.

Click here for a high resolution version of the image.

Note, that the basic type and the message type of an IDoc may be different, depending on the used SAP version and the application scenario.

EDI standards play an important role in today’s automotive supply chains. Depending on the business partner and the global location, one may encounter a multitude of different EDI standards and standard versions.

You have questions or remarks in regard to EDI in the automotive industry? Please leave a comment or let’s get in touch – I am happy to discuss your thoughts!

A fine brief which would definitely help a newcomer to EDI processes. A following and a more detailed blog which underlines the differences between EDI standards and maybe gives clues about your previous experiences with them will definitely come in handy.

Thanks for your work Philipp,

Thanks for the remark - we definitely have a lot of experience to share here and will do so in the upcoming blog posts. Stay tuned!

This is a nice blog. Thanks for your explainations.

Otherwise; there is no detailed blog about automative edi examples in SCN. We wait a blog that contains configurations and implementation of edi integration. Schedule agreements would be best example that is used all over the world. !!!

We are currently working on a more detailed example for the correct configuration of Scheduling Agreements in collaboration with EDI. We will publish the results here on blogs.sap.com.

We will let you know, as soon as the results are available.

Are there any changes coming with S4?

Yes, there are indeed some changes with S4. For INVOIC02 IDocs for instance:

- The E1EDP01 has been extended

- The E1EDP02 has been extended

- There is a generic extension mechanism using the E1IDOCENHANCEMENT element

- Some typos in the documentation have been corrected