Recently, I read a posting, titled: The Days of 2FA SMS (and A2P) Are Numbered on a site called no jitter. I’ve linked it, if you want to read it yourself, but the author basically states that A2P will grow for a few short years, but then will “eventually find a home next to my imaginary fax machine.”

That’s his opinion. Mine is different and yes, I admit some bias, being a longtime advocate of the mobile messaging world. However, let’s look at the evidence.

One thing that we constantly see is that businesses are clamoring to include mobile messaging as part of their consumer outreach. As has been stated many times, many places, an SMS message is typically read within the first few minutes of receipt, by over 90% of the recipients. That includes Person-to-Person (or P2P) as well as Application-to-Person (or A2P). To reach consumers and encourage them to engage, businesses are increasingly turning to mobile messaging as their primary channel.

Global messaging analyst Ovum recently published a forecast indicating that A2P SMS will increase to as high as 1.42 trillion messages by 2018, with a slight decline to 1.37 trillion messages at the end of the decade.

That’s hardly a fax machine analogy. Ovum also noted that mobile connections as a percentage of the global population is very near 100% and SMS is standard on all mobile devices. They also indicated that A2P usage of messaging chat apps such as Facebook Messenger, Line, WeChat and others are expected to be complementary to SMS rather than a substitute. I do agree. Multi-channel engagement (or omni-channel as some have called it) is a key element to providing outreach to consumers through the primary channels that they use and like.

In my own experience, I can say that many of the messages that I get today are A2P – some of them two-way (meaning that I can respond). Sources such as: FedEx, UPS, and USPS, to track and manage my shipments; my county government/sheriff’s department (traffic alerts); my hair salon (for confirming and managing appointments); my banks (alerts, 2FA), my car’s service center (alerts), Twitter (retweets, responses, 2FA); credit cards, online shopping (confirmations, alerts, 2FA); Tripit (travel alerts) as well as airlines and hotels (alerts, interaction). In addition to my P2P traffic, that’s just the first few screens.

Would I use another channel if it were available? Maybe; however, that requires watching and managing another messaging app. The key benefit to these businesses that use SMS is that it is on everyone’s device and all is needed is a telephone number. In many cases, other channels such as email are available; however, they are not chosen as I’d prefer to limit my alerts to SMS – again, like so many others, a channel that I will most likely access very quickly.

Multi-channel mobile engagement is increasingly popular among businesses. Earlier this year at Mobile World Congress, SAP Digital Interconnect surveyed many participants about the channels that they were considering for engaging with their customers. Almost 70% indicated that they already engaged consumers through mobile channels and 82% indicated that they would consider using a chatbot through messaging (including SMS, or chat messaging such as Facebook Messenger/WeChat) to provide interaction with their customers.

Some have said that the future lies with Push Notifications. Well, that implies that we must download and utilize a (another!) mobile app. The issue with that, is that many consumers have mobile app overload – too many apps that might get used once or twice, then abandoned. I bet many of you have lots of these on your devices or you may have already deleted them. Do you have lots of little numbers on your iPhone apps? If so, each one indicates a push notification that you may not have read or reacted to. This is a problem.

Then there are the newest engagement channels: Chat apps or IP Messaging apps. Certainly, WhatsApp is one of the most popular for P2P in many countries; however, WhatsApp has not yet evolved to a valid consumer engagement channel – even though this capability is hinted that it is coming soon. That leaves various regional favorites, such as WeChat (popular and heavily used in China), as well as Facebook Messenger. Many of these make very good use of chatbots – some very simple, others with an extensive artificial intelligence engine managing the conversation. In fact, there is a movement to make chatbots even smarter and more useful and available to multiple channels – even including SMS.

Chatbot based solutions imply a new and growing engagement model called conversational engagement. Conversational engagement enables the user to type and expect to receive a response based on the chatbot’s recognition of the user’s intent. Chatbots may be deployed using SMS; however, they are most commonly incorporated with IP messaging chat apps such as Facebook Messenger.

Conversational Engagement has the potential, especially with standards-based messaging such as SMS and soon RCS (which we’ll get to shortly), as being useful in reducing the need for businesses to require users to download and use a mobile app. In many cases, all that is need for a business to fully engage with their users is a chatbot based interface.

With RCS or Rich Communications Service, conversational engagement takes on a whole new meaning. Recently, the GSMA has begun releasing a common standard, called Universal Profile, that will standardize RCS much better than it ever has before. Additionally, this time around with RCS, it is being pushed as a new A2P channel vs. P2P (although it works fine in a P2P setting). I will write a new detailed posting about A2P RCS soon. As RCS is standards-based from the GSMA, some of postulated that it is new “new SMS” or “next generation of SMS.” This is true, but until it is supported on every mobile device like SMS, I would hesitate to give it that designation. One other thing to note is that in combination with Google, who is a major sponsor of RCS Business Messaging, there are many of the key global messaging providers now participating with Google to create RCS-based engagement with a variety of global brands to jump-start this process. 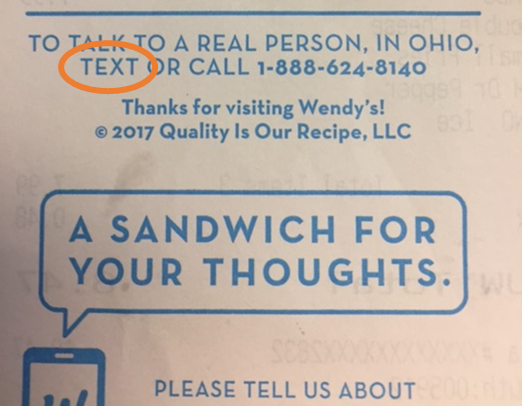 Still standing at the top of all these messaging-based engagement methods is still SMS. In virtually all cases, SMS still come out ahead in terms of reach, ease of implementation options, and even price. In markets where P2P is almost always WhatsApp, users still turn to SMS for their A2P alerts. In some markets, such as the U.S., SMS is now being used as a direct customer support channel. Take Wendy’s for example. On the back of every receipt is a note to “talk to a real person, in Ohio, text or call 1-800-624-8140.”

Customer support through messaging, whether SMS, chat apps, or even in-app is becoming more prevalent; however, combining voice and text on a well-known phone number really only happens with SMS.

So… will SMS go the way of the fax machine? Not for a long time if the analysts, messaging providers, and businesses that rely on it have anything to do with it. We believe that SMS, selectively coupled with a growing variety of other channels make for the perfect mobile engagement solution, well into the next decade.