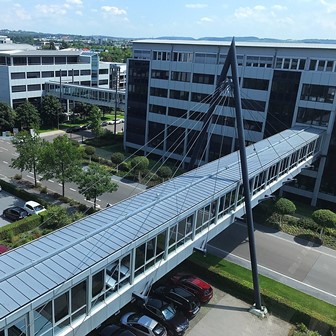 SAP HANA promises to cater for both OLTP and OLAP workloads. This enables operational analytics within an SAP S/4HANA system. The SAP-focused reader might wonder Why, on earth, do you still want to have an SAP BW/4HANA system in your landscape? This blog looks at 3 anonymized customer examples that reveal why having a data warehouse—such as SAP BW/4HANA —is even more pressing in times of digitalization than ever before.

A data warehouse is thereby considered as the place that brings data and its underlying semantics from a variety of sources together in one place, either physically, virtually or mixed, either using an RDBMS, a big data environment or a combination thereof, either deployed on premise or in the cloud.

The first example comes from a leading consumer goods company. Figures 1a and 1b show details from two of their slides and list the sources of data that feed into their data warehouse. As expected, there is a bunch of traditional SAP systems, such as ERP (S/4), CRM and APO, but— as it has become common in days of digitalization— also from sensors, logs, digitalized sales and marketing.

Now, bringing that data semantically together (for example, to understand the financial impact of digital marketing on financial results) becomes mandatory. You need a system that is equipped with tooling and mechanisms (like modeling, security, transformation, connectivity, lifecycle, monitoring, governance in general) that allows that semantic consolidation. This is exactly what a data warehouse does. SAP BW/4HANA provides this infrastructure while SAP S/4HANA focuses on certain business processes.

Fig. 1a: Detail of an original slide by an SAP consumer goods customer.

Fig. 1b: Detail of an original slide by an SAP consumer goods customer.

The second example is from a fashion customer that sells its products predominantly via on-premise stores but increasingly online. The latter triggers the need to consider more and more online behavioral data, such as clickstream or social media information, in order to answer questions about the products for which a customer has shown some interest or what the brand perception is , and so on.

Figure 2 lists data sources that this company is analyzing. One aspiration is that demand can be better predicted by better understanding a customer’s interest indicators from clickstreams and social media. That in turn can impact demand, supply, and other planning in system such as SAP BW/4HANA.

Fig. 2: Detail of an original system landscape slide by an SAP fashion (on premise + online) customer.

The third example is from an oil and gas customer. Figure 3 shows the data sources that it connects to its data warehouse. There is obviously a mix of SAP and non-SAP sources. For instance, there is data on seismic measurements, oil rig sensor information, drill status (both for predictive maintenance), and oil well status.

Again, there are several scenarios or analytic questions that require the user to combine such data with data from an SAP system. To that end, a data warehouse approach is necessary. Simply copying such data into the SAP HANA system underlying an SAP S/4HANA instance would fall short in many ways—you would still end up creating a data warehouse on SAP HANA that coincidentally sits on the same SAP HANA as the SAP S/4HANA instance.

Fig. 3: Detail of an original system landscape slide by an SAP oil and gas customer.

These three real-world examples show that modern analytics requires data from an even larger variety of data sources than ever before. Big Data, IoT, digitalization, and similar trends have added to that variety. Integrating data from those sources is more than just copying them together to or exposing them logically in one location.

The need for a data warehouse remains as the place that brings the data together (physically or logically) and semantically integrates them through transformation, harmonization, synchronization, and so on. This is complemented by operational analytics inside a single operational system like SAP S/4HANA, as it focuses and analyses data in there in an isolated way.

In his SAPPHIRE NOW 2017 keynote, Hasso Plattner commented that “he fought against data warehouses in the 1990s”(see here, at 0:37 to 0:39). However, he also states that “there is still an application for data warehouses”. He then elaborates that not all analytics does have to sit in a data warehouse.

This is exactly the distinction and the point argued in this blog, namely: there is operational analytics (directly inside an operational system like SAP S/4HANA and not necessarily in a data warehouse) and there is cross-system analytics (which needs something like a data warehouse). The latter is a problem that is not addressed by SAP S/4HANA but that exists in the real world – see the customer examples above – and that is addressed by SAP BW/4HANA.

I’ve addressed this topic from different angles in previous blog posts. You might want to look also at “S/4HANA and Data Warehousing” and “S/4HANA and #BWonHANA“.

Excellent blog..! Thank you..! Here, we should think one more aspect i.e. how wise to keep Analytical and Transactional load on same database? We have seen that sometimes systems gets hung-up, Index server crashes due to high analytical load which will impact your day to day business with extremely high impact.
So better keep OLTP and OLAP load separate and do not tempt to use S4HANA for both.