With the release of SAP Enterprise App Modeler and its ability to easily create offline mobile applications, I have received many questions about the recent new features in the Offline OData Service within SAP Cloud Platform mobile services. In this blog, I will describe the enhancements to the Offline OData Service over the last few SDK releases.

First, let me provide a quick overview of Offline OData.

Offline support enables client applications to access back-end data without needing a persistent connection to the back end. 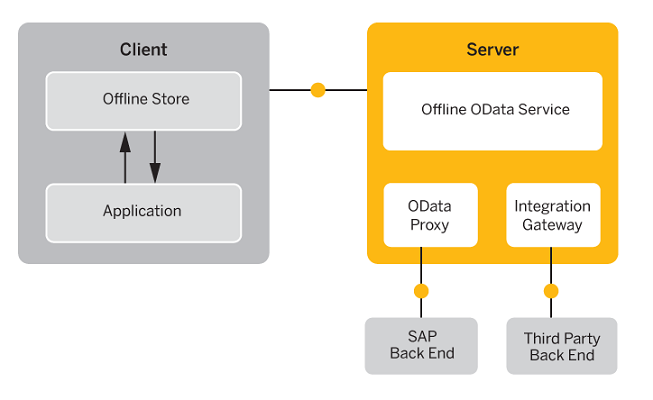 For the New Features, I have grouped them into large buckets – continuous improvement, performance, and usability.

As stated in the previous feature, there are some requests that users do not want merged due to possible errors in the backend, so this feature enables users to patch specific requests and re-sync the transactions without merging them.

So, Application Developers can now patch the first request, ‘Create’, directly. Once the ‘Create’ request syncs successfully, so will the following ‘Update’ requests with status values that the back end will accept.

Queries based on child relationships

Offline OData now provides the ability to query/filter a parent table based on the relationships to a child table. Here is an example – I have two collections, “Farms” and “Answers”, with 1:M relationships between them. I should be able to filter for all farms who have answered X to question Y. This is like the SQL “exists” query syntax. To support this Offline OData provides access to lambda operators previously only found in OData v4 – ‘any’ and ‘all ’.

Ability to clean up non-matching entities on client

Application Developers now have the option to remove non-matching entities from the client after refreshing. Currently in Offline OData, if entities are created in my application that don’t match the defining request(s), they stay on the client and do not disappear after a refresh().   As an example, I may be a service worker who is only sent work orders currently assigned to me, but I am also capable of creating new work orders which will initially be unassigned and may end up being assigned to a different service worker. At the moment, work orders like this can be created on the client, but since they are not returned by the refresh(), they stay on the client forever. Now Application Developers have more control how to handle these situations. The Application Developer can have these types of entities disappear automatically. It is an option that can be configured.

Delete relationships based on referential constraints

This new feature in Offline OData provides the ability to delete links locally and in the backend with a single operation, even if my backend doesn’t support $links. Specifically, this means that I expect to be able to set the dependent properties specified in a referential constraint to null, thereby deleting the relationship.

Over the last few SDK releases, Offline OData has focused on improving performance. Offline OData is now able to better leverage indexes that the customer specifies to a much greater extent than before.

During internal testing, we have regularly recorded performance improvements of up to 1000 times faster. If you are already using indexes for your data, you should be able to take advantage of this performance increase.

Usability is a big part of the feedback that we receive from external and internal customers. Our goal within Offline OData is to continuously listed to our customer feedback on usability and make changes to the product based on that feedback. The following new features increase Application Developer productivity.

End users can now get more feedback during the synchronization process. If the sync is running in the foreground, Offline OData provides a lot more information and feedback to the end user of the mobile application.

While some users choose to monitor the sync with extra feedback (stated previously), other users can now let the sync run in the background with little or no manual intervention.

Offline OData will enable the sync to run in the background to the extent that the OS allows it do so. Some OS will require manual intervention as some point and force the user to act, but Offline OData will resume the sync rather than restart it from the beginning.

Turn on logging on client for all requests

Offline OData now provides the ability to turn on logging on the client of all requests (fetch and CRUD) made by the application for debugging purposes.

"With the release of SAP Enterprise App Modeler" - does this mean SEAM is officially available for general customer use? I have followed the initial blogs on it and it does not seem to work.

We will be releasing videos and content for setting the product up for custom app development as we get closer to general availability.

Just wondering if you have any updates on availability of SEAM or how to get on the early adopter program. Our customer is looking at alternatives and we'd like to demo seam before we lose the opportunity!

ps. You can contact me direct on jason at jaylin.com.au

SEAM is now knows as the mobile development kit.

We have released our 2.0 version and it supports custom native mobile app development for anyone.  Check out my What's New blog to find out how to get it from the SAP Store and SAP Web IDE.

Hi Sue, thanks for keeping us up to date with the developments in this important area.  I was particularly interested in the Enhanced Performance section.  Could you give me some background about the indexes you are referring to?  Is this on the OData service, or referenced in the Application Configuration File?