Comments
The first new feature for CDS is the ability to use comments in your CDS source file.  This is done by using the @Comment annotation which can be placed anywhere in your source code. 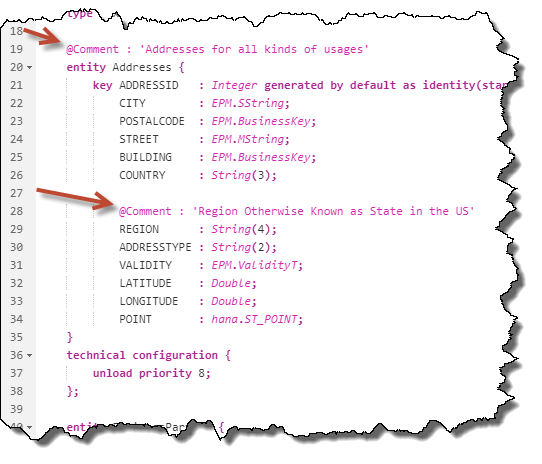 Column level comments are transferred to the run-time objects in the catalog as well.  So if you were to open a table in Database Explorer, and look at the comments column, you would find the comment for your column.

Select from Table Functions
The next feature for CDS is the ability to select from a table function when defining a view in your CDS artifact.  As you can see in this example, we have defined a view which selects from the BusinessPartner table and does an inner join with a table function called getPartnerRoles. 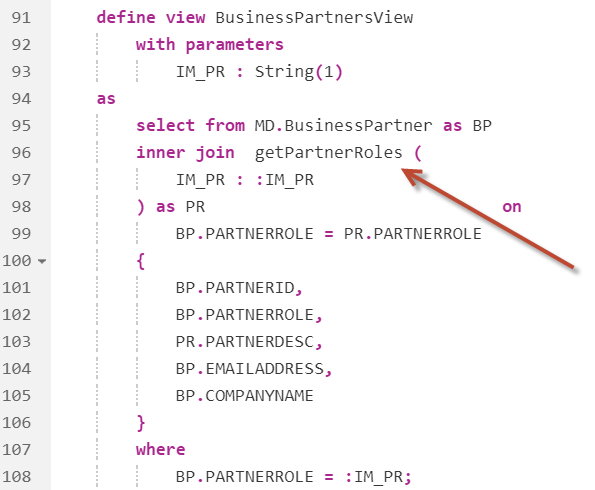 System Variable for Line Number
The next feature is a system variable for line number.  In some cases, a developer requires to know the line number of the statement within a procedure/function which is currently being executed.  You can now use the system variable ::CURRENT_LINE_NUMBER to capture this. 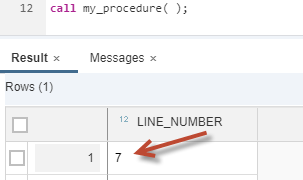 Enhancements to INSERT Operator on Table Variables
In SAP HANA 2.0 SPS 01, we introduced the new table operators for table variables. This included operators such as INSERT, UPDATE, and DELETE.  At the time, when using the INSERT operator, you could only insert 1 row at a time.  In SPS 02, we’ve enhanced the INSERT operator to allow the possibility to insert many rows at one time.  As you can see in this example, we can now insert a set of rows from another table variable into a table variable or export parameter. SLEEP/WAKE Functions
Next, we have the SLEEP/WAKE functionality.  These new built-in procedures are part of the new SYS.SQLSCRIPT_SYNC library.  We are in the process of introducing a new library concept in general and this library is the first to be released for customer use. The plan for the next support packages is to add more and more built-in procedures and functions for customer use.  We also are looking to allow customers/partners to build their own reusable libraries as well.  But for now, we have the SLEEP_SECONDS procedure which allows you to put your current execution to sleep for a given number of seconds without burning CPU, and the WAKEUP_CONNECTION procedure which will wake the sleeping sessions.   In order to use these procedure, you must use the USING clause in your BEGIN statement block as well.

Finally, we have the SQLScript Code Analyzer.   The SQLScript Code analyzer consists of two built in procedures that scan the course code of procedures and functions.   By applying a selected set of rules, they search for certain patterns that indicate problems regarding code quality, performance, or security.  The rules are defined in the SQLSCRIPT_ANALYZER_RULES table, and currently there are 4 rules.  We do plan to add more rules over time.  The SQLScript Code Analyzer is currently deactivated by default. It can be activated with an ini parameter or a session parameter:

Again, there are two procedures which can be used to scan. The first procedure is the ANALYZE_SQLSCRIPT_DEFINTION which is used to analyze the source code of a single procedure or function which has yet to be created.  This procedure expects 2 input parameters, a string which contains the DDL of the procedure or function, and the list of rules to be applied.  It then returns 1 output parameter containing the findings.

The other procedure we can use is ANALYZE_SQLSCRIPT_OBJECTS which is used to analyze the source code of multiple procedures or functions that already exist in the catalog.  This procedure expects 2 input parameters, a list of objects which are to be scanned, and the list of rules.  It then returns 2 output parameters, a list of object which were scanned, and of course the findings.

As mentioned, there are currently 4 rules that are defined.  Below is the list of rules and their description.

Rich: is SP2 out already for General Availability to all customer?.

We are on HANA 20 and are interested in upgrading to HANA 20 SP2.  Please advise. Thanks.

Yes, it was released the other day.

First of all, I'd like to thank you for sharing this knowledge.

Then, I have a question regarding the encryption. Is there already, or in plans for future development, a way to encrypt also Repository objects, specially graphic column views?

In my team, we try to use graphic views as much as possible in order to get the maximum optimization for HANA and it'll be really useful if you also protect those views, and not only SQLScript code.

thanks for sharing the information. Particularly the description on the rules currently supported was very hepful.

As part of my master's thesis, I am investigating possibilities for optimizing existing SQLScript code. The idea is to formalise the best practice descriptions from the SQLScript Reference and provide information on violations in existing code.

Can custom rules be defined and added? Are you planning to transform the best practices into such rules in near future?

When I try to reproduce the SQLScript Code Analyzer examples, I get the following error:

I execute the following code via the SQL console from within Eclipse:

Calling other procedures is not a problem, so there must be something odd with this particular call. Do you have an idea what is wrong with it? To me it looks equivalent to the example from the SQLScript reference and in your post.

Even after mentioning the @Comment field in HDBCDS file, I am not able to see the column comments. I have added this and checking the TABLE_COLUMNS to validate the same but its null always.

The HANA version details we are using:

Will this feature be available to XS Classic as well in future SPS?

No, we will not backport any CDS features to XSC. They are only available in XSA.