The 2017 edition of the Higher Education & Research Executive Forum took place on April 6th & 7th at SAP Labs France in Sophia Antipolis.  These two days were a blend of updates from SAP and
from customers on outlooks, trends and challenges.

Speakers and leaders both from SAP’s locations and institutions were invited, which represents about 30 C-level executives from 12 countries.

As you can imagine, the agenda was quickly packed and the time that you can stole for brainstorming decreased rapidly, so how to foster the creativity of our HER guests – 30 C-level executives  – in 45 minutes was our challenge .

Not using such amount of brainpower will be a pity but how give the opportunity for everybody to contribute ?!?

We decided to implement a variation of the Carousel Brainstorm process. Chart paper containing the questions to be addressed were posted in four different rooms.Groups brainstormed for 10 minutes at one station and then rotated to the next position where they add additional comments. As new thoughts and ideas emerge, the list grows. When the carousel “stops” the coach took a picture and the summary of findings will be presented in details in a webinar to the participants and in the Silke’s blog. 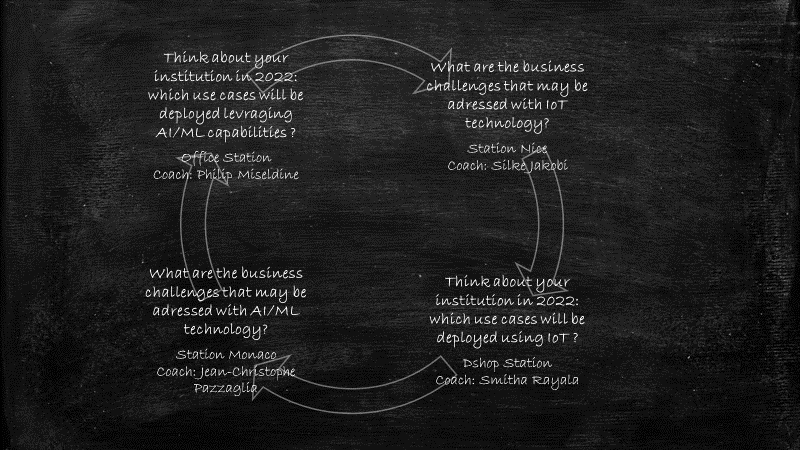 The Carousel Brainstorm provides an opportunity to use the group’s collective prior knowledge to further individual understanding. It is an active, users centered method for generating and sharing large amounts of data.

Anonymous (Head of SAP HER) !

To implement efficiently the method, 4 groups were pre-determined and a colored sticker identified the group membership (eg. blue, green, red and white). Groups mixed genders and continents, people from the same organization were in different groups. A guide was guiding the different groups from station to station. Each station was equipped with a whiteboard, the usual set of colored sticky notes and the topic of the station. After the first iteration, the coach explained the different clusters identified and the ideas developed during the previous iterations. Then a 3 minutes silent brainstorm was used to collect new ideas that complemented the initial ideas.

The four station topics were : Figure 2: Evolution of ideas and clusters at the Monaco station

And guess what we did it and on time, our bet worked 🙂

In less than one hour, the group generated around 150+ consolidated ideas organized in 30+ clusters regarding the use of IoT and Machine Learning to best run Higher Education and Research Organizations. This is what you will discover in reading the latest Silke’s post.

He confirmed me that this technique – that I used once almost 8 years ago as a participant – is a powerful way to give a creative twist to your large meetings and to enable everybody to provide ideas in a far more efficient way that keeping everybody around the table, he also obliges participants to understand what other people ideate, and it is listening that opens the door to co-innovation !

It is listening that opens the door to co-innovation !

To make it complete, every groups should have finished by summarizing what the others did from their initial ideas, but , unfortunately, we knew we will not have time for that round and we will provide a report on the findings.

For sure I love it and I will do it again !

If you want to do it too and need some support to implement this method, do not hesitate to drop me an email or leave to comment.