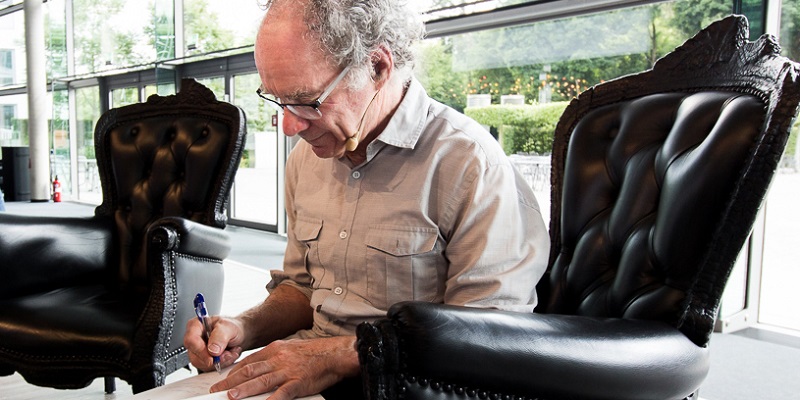 “You’ve won a seat at the table. People are listening to you. You’d better have something to say!”

Challenging, motivational fighting talk straight from the mouth of Barry Katz, author, IDEO fellow and widely-published design historian, after telling an avid SAP audience how intensely design has influenced Silicon Valley over the decades and how designers have now earned their right to be major players around the discussion table.

This was the 10th SAP Design Talk held in Walldorf, and it took place in sizzling temperatures reminiscent of Silicon Valley itself. With a large dose of humor, candidness and countless stories of products, people and pioneering companies he has encountered over the years, Barry took the crowd on a journey through time, revealing how design has gained in importance and utterly changed in scope. “Designers were originally decorators, craftsmen. Now you can even do a PhD in Design,” he said, reinforcing how much things have changed over the decades and how the designer’s sphere of tasks has expanded. Being a designer now sometimes means working on completely different design challenges, he says, like establishing child education strategies in refugee communities, or conquering problems relating to ever-increasing obesity in society.

And this constant link between where we’ve come from, where we currently are, and where we are heading, was an ever-present theme for the man once described as a “historian of the future”.

Pocket-sized and bursting full of history, just like the pioneering HP-35 calculator launched in 1972 (coincidentally the same year SAP was founded), Barry has lived in Palo Alto since 1981. His knowledge of Silicon Valley and design in the entire Bay area is almost undoubtedly unparalleled, likewise the number of roles and positions he holds. Aside from authoring successful books such as Change By Design (with Tim Brown) and Make It New: The History of Silicon Valley Design, Barry was the very first person to become a fellow at the IDEO design company, almost twenty years ago. “The big advantage is they can’t fire me,” he jests, like a professor cheerily motivating his student audience. Little surprise, given the fact Barry is a professor at two highly renowned universities. At Stanford, Barry says his job is to “get engineering students to think about art and design more seriously”, while trying to get art students to “take science and technology more seriously” is his flipside mission at California College of the Arts in San Francisco.

It’s this awareness of the bigger design picture, this insight from Barry that design is no longer merely a “link in the chain” but has rather moved “to where design is the central hub of a wheel” that sets the scene for what is to come and, to a great extent, what has already begun. The Bay area now has the greatest concentration of design professionals per capita on the planet. “Design is the critical differentiator now, as the underlying technology is converging,” he says. It is the reason we are seeing designers playing major roles in many company hierarchies – earning this aforementioned “seat at the table” – and even co-founding some of the most successful start-ups we have seen in recent times.

To the Walldorf audience, the gadget hotbed and start-up beehive that epitomizes Silicon Valley and the Bay area seems a long way from their daily work. So what can designers and non-designers at SAP learn from Barry’s lively talk? He left the crowd both with words of encouragement as well as some words of caution. In his words, transforming design within a company of this size had been an “impressive accomplishment”, but it is crucial not to let the success and popularity of things like Design Thinking “go to our heads”. As he perfectly explained, Design Thinking is not some “magical process of steps which ends up throwing out a perfect product”. In more concrete terms, he believes we should start looking more closely at what companies are doing in other industries away from enterprise software, citing Food and Beverages as one possible candidate. This is how to remain truly innovative and set oneself apart from the competition, which will become more vital than ever with competitors increasingly coming from different industries.

Back to Silicon Valley, Barry quips how “my fault” and “your fault” are how his students refer to the two earthquake fault lines that sandwich the Bay area where Silicon Valley is located. Small coincidence perhaps that the design industry has played such a major part in shaking things up throughout the Bay area. Which doesn’t just happen by default.

You can hear more from Barry in this short interview:

Make It New: The History of Silicon Valley Design