It’s that same time of the year again, SAP TechEd is just around the corner and its preparation is one of the hot topics at SAP right now!

If you’re interested in getting a detailed understanding of SAP’s portfolio of solutions, platforms and technologies, and insights into their future direction, but also in putting your hands on the latest and greatest features and tools, then join us at the different SAP TechEd 2017 events all around the world.

You’re looking for another reason why you should attend the SAP TechEd events?

Then check out the SAP TechEd 2016 opening keynote in Las Vegas “Back to the future” from Björn Goerke, Chief Technology Officer (CTO) and President SAP Cloud Platform, SAP SE.

Prior to the event you can also check out some of the ABAP highlights from SAP TechEd 2016!

Let me now use this blog to draw your attention to some of the ABAP-related sessions (demo-rich lectures, hands-ons, road map Q&As, CodeJam mini-editions, …) concocted by experts from SAP and by the SAP community, i.e. mentors, customers and partners.

Sessions around the ABAP Programming Model for SAP S/4HANA

I hope I could arouse your curiosity… Join us at SAP TechEd 2017! 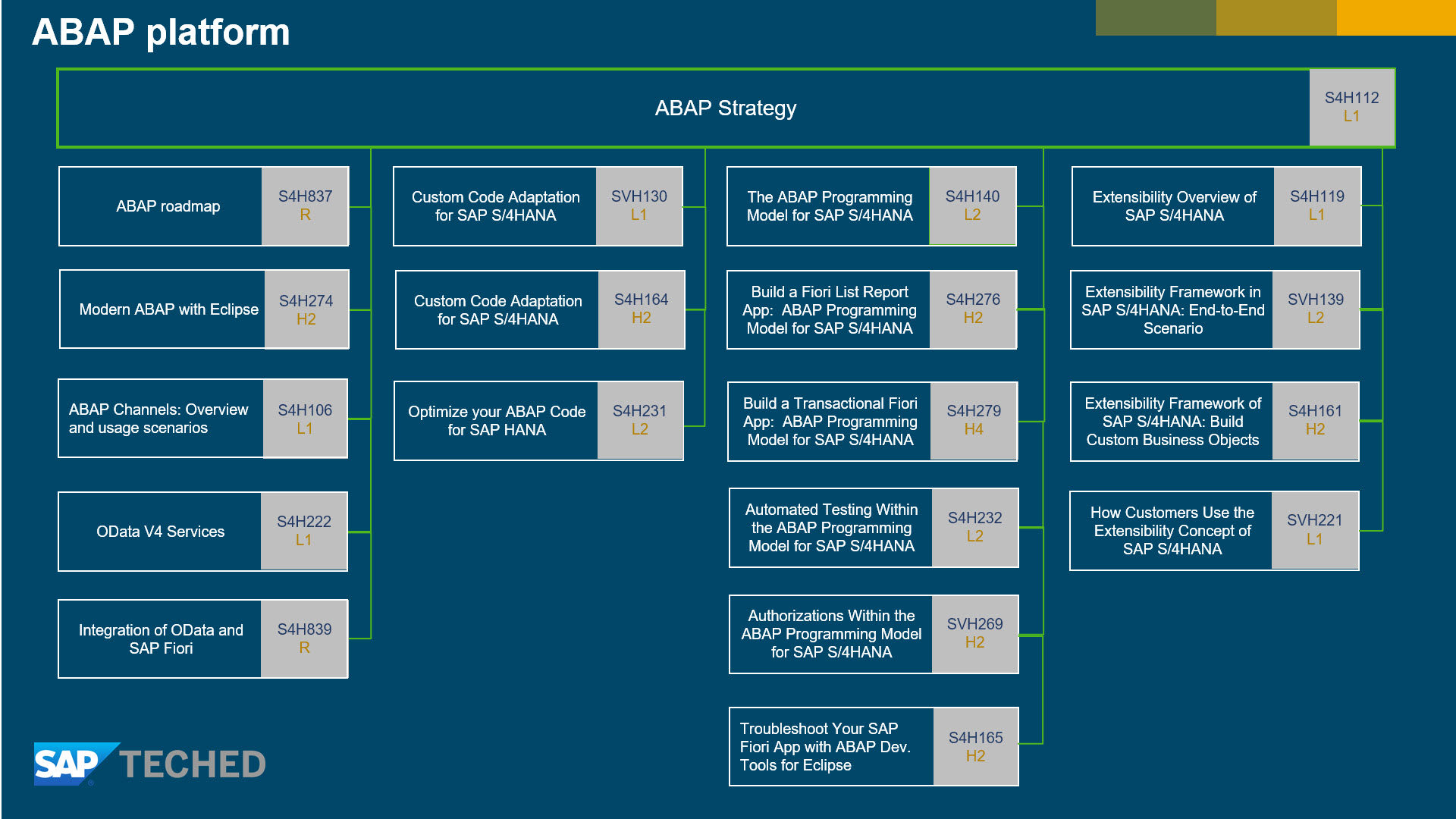 Awesome exciting times but madam you are still to provide videos for the s4/hana application development based on fiori. and u promised it last year.

We uploaded a video recording from the last SAP TechEd which includes a live system demo (over 1h) showing how to build a SAP Fiori app based on the ABAP Programming Model in SAP S/4HANA from scratch.

The demo starts around 42:20 and comprises the step-by-step development of a read-only Fiori list report app and its enhancement to a Fiori transactional app.

Yes Carine, watched it a zillion times. But i wasnt the short cute informative videos like u posted for debugging AMDP etc, short to the point an dwell recorded without the extra drame from live demo stuff in parts.

I'll be there!   I'll be there in Las Vegas!   My bags are packed.   OK not really.   But I'm really excited.  Really you do miss a lot if you aren't there in person.   But of course not everyone has bosses or time to go! <Sigh>  I wish all developers in SAP land could go.

Once you get to the conference and breath that geeky air, look around and see people ready to learn, you will know what I mean.   I love the sessions.   I also love meeting people and talking with them.   I think I'll take a notebook with me.   Us developers sometimes have business cards and sometimes not.

Looking forward to it!

Great! Hope to meet you there!

Nice list! This certainly will make the ABAPers' agenda building easier. The only thing I wish you would have noted is the presenter. Usually it plays a huge role for me. Paul Hardy is not to be missed this year. Not sure if this list includes his session or it's just the official SAP content.

As speakers may differ from one location to another, please click on the provided location links to read further details about sessions like speakers and related sessions.

I intend to also list non-SAP sessions in this blog.
@Everyone: Feel free to mention the missing ones in the comment section.

Hello Carine, Is it still possible to access these old Session Videos?