Some messages, (usually large messages), received in the cloud integration system have the potential to lead to an out-of-memory error in the worker node, because processing the message requires too much memory.

If such messages are processed in an asynchronously decoupled scenario using JMS, the message is stored in the JMS queue via the inbound flow, where there are normally no memory consuming conversions. But in the outbound flow, the message may cause the problem described above: The node fails due to lack of memory, Cloud Platform restarts the node, the message is polled again from the queue and therefore causing another out-of-memory error. The node restart would try to process the message again and again, leading to complete node unavailability.

To avoid this situation, messages where processing stopped unexpectedly, are retried only twice. After that the message is taken out of processing and stored in a dead letter queue. Manual action is necessary to restart or delete such messages.

Performance Impact of the Configuration

For high-load scenarios or if you are sure that only small messages will be processed in your scenario, you should deselect the checkbox to improve the performance, but do keep the risk of an outage in mind. The recommended configuration would be to configure the size check in the used sender adapter and with this configuration reject large messages to avoid that a large message can cause an out-of-memory. Unfortunately not all sender adapters support the size check yet.

If you open an old integration flow, the Dead-Letter Queue setting might not be available because the version of the JMS adapter is too old. To find out the version choose the Technical Information icon in the channel. If you want to use the dead letter handling option, delete the sender channel and add it new from the palette. You will then get the latest version. 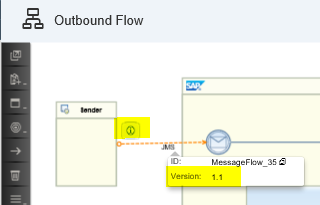 Messages that fail because of an error during processing, do not go to the dead letter queue, but either stay in the normal processing (with a defined retry interval) or are removed from JMS (if configured in explicit retry modeling).

To check whether messages have been removed from processing and moved to the dead letter queue, you can use the monitoring tools provided by Cloud Integration.

After the second retry, the message is moved to a dead letter queue and can be found in the Queue Monitor (described in the next chapter).

You can check the message that was taken out of processing in the Message Queue monitor, which is in the operations view, in the section Manage Stores.

The easiest way to find these messages is to use the filter option or sort based on Status. 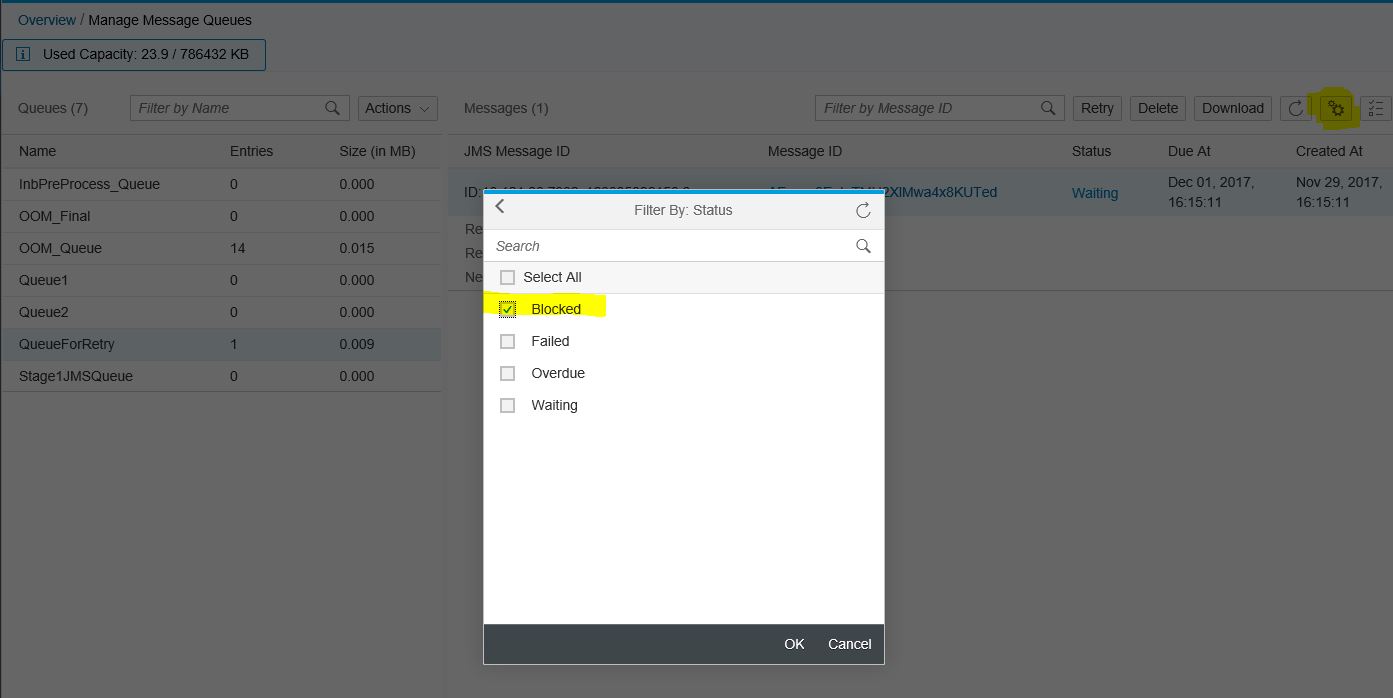 Analyze and Solve the Root Cause

To find out, whether the message was causing the outages, you can download the message and check its size. On the basis of this analysis you can decide, whether to completely remove the message from processing, change your integration flow, and/or try to send the message again:

Could I blocked the whole JMS Queue??not blocked a single message in the queue

No, this is not possible.

In case in a JMS queue, after several times of retry we would like to stop the retry and keep the message in the queue. Is this possible or we could only follow the way described here that it retry twice and move to the dead-letter queue, then later manually retry?

The question is consider following scenario, for example a message send to the receiver system and receiver is on upgrade so we need to queue the messages on CPI and send later.

No this is not possible. If you configure exponential backoff the retry is not done so frequently anymore after some retries. But there is no option to stop the consumption for some specified time.

You could move the messages into another queue and trigger this via deployment of an integration flow consuming from this second queue.

Thanks for the detailed blog, can you help with the below clarifications?

5. So if we compare Dead letter queue handling with JMS to JDBC.

a. In case of JMS, we have an explicit option to enable/disable DLQ. If enabled such message causing node outage will be marked as "Blocked" in the queue ( no lock on such message in "lock monitor") and no further retry is processed on such messages. The developer can filter out the messages on the "Blocked" status from the Queue and later delete those.

b. In case of JDBC DLQ is always enabled internally, and such messages are locked in "lock monitor" and these messages are not visible in the respective Data Store, as there is no such thing as "Blocked" status for DataStore. So can the developer delete the messages from the lock monitor?

Is there any way/trick i can try out this behaviour i.e making the message fail of an out-of-memory error? I tried pushing a large file(1 GB) into JMS and this was consumed successfully by the sender adapter without any error.

6.Regrading the missing process ID, this is in the CF trial account.

5. b: the message will also stay in data store but does not have the status Blocked, you need to correlate the entry in the Lock Monitor with the message in Data Store by the entry ID which is the message ID.

You could create an out-of-memory for example if you allocate a lot of memory in a script.

6. In CF we don't have process IDs as in Neo, that's why it is not visible. We need to discuss if we can hide this column in CF.