At Smart Cities Connect in Austin Texas, a panel of city Chief Information Officers (CIOs) and Chief Technology Officers (CTOs) shared insights from their collaboration to drive smart cities forward. The panelists are members of the Council of Global City CIOs (CGCC), founded in September 2016 to share data and use technology to solve problems and transform cities. 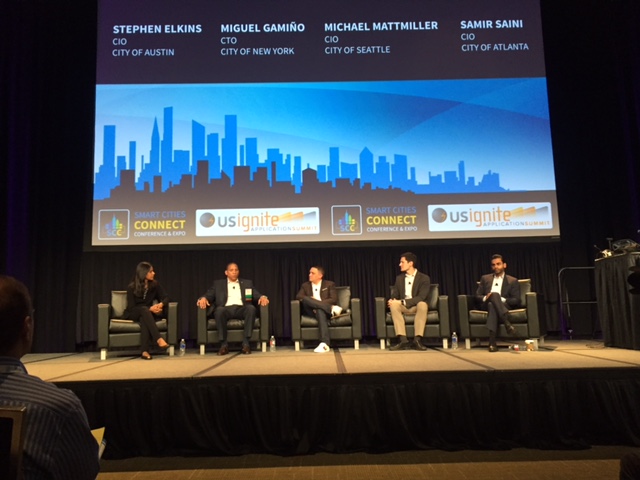 From left to right in the photograph:

Cities face similar challenges: increasing the availability of affordable housing, improving public safety, improving public transportation, improving air quality, investing in infrastructure, and bridging the digital divide to improve equality of opportunity for citizens and businesses. The list is long, and each city has its own priorities, ranking the issues according to local needs. For example, transportation is a hot button issue in the Austin-Round Rock, Texas metropolitan area, where population practically doubled since 2000, while transportation infrastructure has not kept pace.

So how are CIOs and CTOs collaborating to serve their cities better?

US cities are taking the lead to move forward with smart cities initiatives despite recent federal changes. They are educating both city leaders and Congress on the benefits of smart cities initiatives, such as increased availability of gigabit broadband service to homes and businesses alike, which supports business and provides access to on-line tools and education, such as massive open on-line courses (MOOCs), so citizens are better able to join the digital economy.

Funding is yet another challenge for smart cities due to the cross-agency nature of projects and constrained budgets. Panelists acknowledged that they have to “pass the hat” not only within the city, but also in the neighboring communities, to find funds for their smart city initiatives. Funding sources include budgetary resources, bonds, and/or federal funding. Local organizations such as universities and non-profits also participate in various smart city programs.

The panelists advised technology and services vendors to participate in the local smart city ecosystem. Each city has a consortium of organizations including universities, non-profits, technology vendors, telecoms companies, city organizations, and services providers. Organizations such as Austin CityUP, Envision Charlotte, Cleantech San Diego, and the Dallas Innovation Alliance are working on smart cities pilots. This may form the basis of future procurements and reward those vendors who participate early and do good work.

Implications for SAP customers: learn from each other

Worldwide cities are in different stages in their journey to becoming a smart city. Some cities, like Barcelona and Buenos Aires, both SAP customers, have engaged in many smart city projects. In Buenos Aires, the use cases include sustainable lighting, flood prevention, and trash collection. Other cities, such as San Diego, California, Dallas, Texas, and even the State of Illinois have projects in progress and are in the early stages of their journey to become a smart city or state. Many cities in India and the Middle East have smart cities plans. Finally, Singapore, a city-state, has a smart nation program.

Unlike in private sector, public sector executives can and do help each other by sharing their experience and best practices. Here are some tips for success in smart cities:

SAP was on a panel at this event. What a great opportunity to get closer to these Smart City leaders!