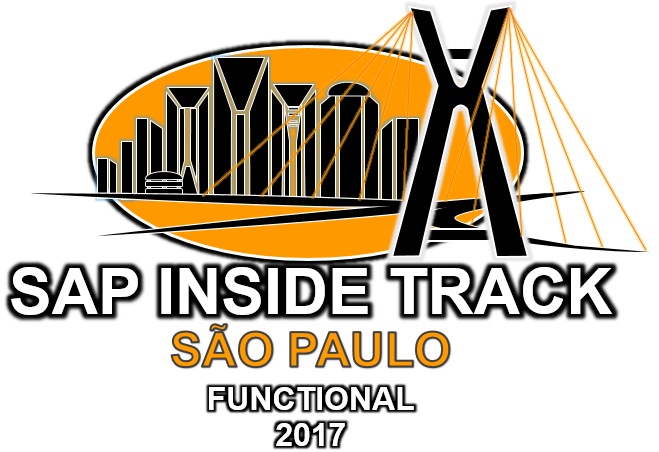 Last Saturday, July 8th, SAP Brazil hosted again an SAP Inside Track São Paulo, Functional edition. It was the 11th #sitSP event and the second focused on functional topics. And once again we had full house! We had to close registration many days before the event and the waiting list was sold out very fast. Talking to our volunteers about it a few days before the event, I suggested we should do the next sitSP at an Arena, and they loved the idea 😀 “Dream you dream alone is only a dream, but dream you dream together is reality” – Yoko Ono in her song “Now or Never” of Album “Approximately Infinite Universe”.

Here a picture of some of those who dream together. SAP Inside Track São Paulo can only happen thanks to a great team work. 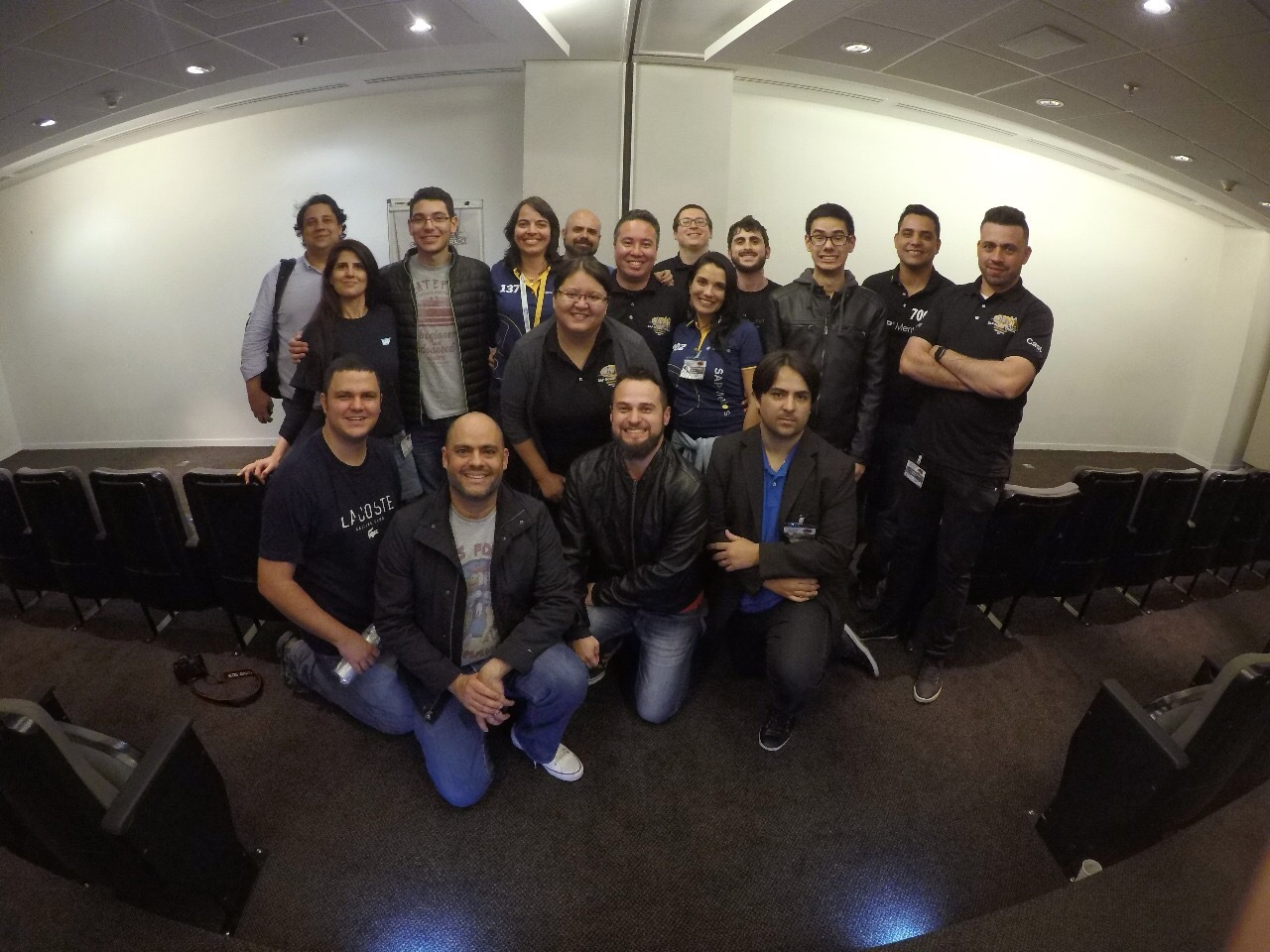 I have another dream: to have a picture of the whole staff all together, organizers, speakers and volunteers, but due to private reasons we can’t have all of them attending at the same time. And a picture of the complete attendance, which will probably need to be outside as the auditorium and the coffee area don’t have space enough to photograph all without squeezing them together :). Maybe one day.

Dreams and jokes aside, the event was great. We repeated the idea of Volunteers registration to allow the community members to join the organization during the event and be part of the “backstage”, helping us a lot with credentials control, check-in attendees in the app, controlling the sessions time to avoid delays, taking care of the streaming, taking pictures, sharing the event in social media, among other things. The event usually has an attendance of around 130 people (which happened again) and takes place in an auditorium in the 7th level of a building that doesn’t have only SAP Brazil, but also many other companies, so the entrance control starts downstairs in the building reception. Attendees have the freedom to arrive whenever the sessions they want to watch will start, so without the help of the volunteers it was very difficult for us organizers to take care of credentials downstairs and of the infrastructure, agenda, speakers, streaming and recording, coffee breaks, gifts and giveaways, and also be speakers, and also fix technical problems that arise every year… We are extremely thankful for their support.

90% of the attendance was from São Paulo state (not only the capital but also from countryside), and the other 10% were from other 6 states, with my hometown included (city Goiânia, state Goiás, 900km from São Paulo), which is something relevant for us. It shows there is still a demand for events like that in other areas, and that is why the Brazilian SAP Mentors are always trying to bring SIT to other cities (we had this discussion last year during an interview with Jonas Lochny).

The relationship of the attendance with SAP is shown below: 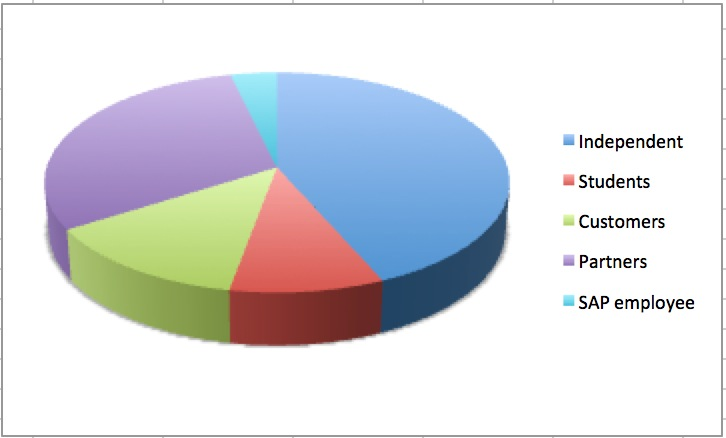 The event started at 8:45 and finished at 18:00. We offered the attendees a breakfast before the start of the event, and a coffee break in the middle of the afternoon. For lunch we had 1:30 break at 12:30 and attendees went to the 2 shopping malls in the area (one exactly in front of the building and the other one just beside).

Below some pictures of the keynote, volunteers and organizers in action, and networking during coffee break.

We had 16 sessions this time split in 2 tracks, plus the keynote. The language of the event was Portuguese, as always. Of course when we have guests from non-Portuguese speaking countries we have an exception, but we usually try to fill the agenda with local speakers from the community, speaking local language. It makes the event more productive to the audience. And more and more we are trying to avoid an “almost SAP Mentors-only” SITsp, which means when we select the agenda, we give the opportunity to community members to participate as speakers and let them shine. Every year (every semester in fact) we have new people starting as speakers in a SAP Inside Track, sometimes first time ever as speaker, which is great.

The complete agenda can be checked in the event’s blog. Some of the materials are already available in the same blog. We are uploading the presentation as soon as we receive the last version from the speakers who agree to share it.
The sessions related to S/4HANA were so full that we could think of making an event only about it 😛 But in fact what we want is to make people aware of all the other SAP Solutions too and of what are the top trends. We would like to offer to those who are interested an overview of other things that they don’t work with in their daily work. So sorrynotsorry, the event will continue having a diverse Agenda ☺ .

Some of the speakers

The volunteers took lots of pictures, so I put them all together with mine in Google Photos here.

At the end, as usual, we run the giveaway. This time we had lots of gifts so it was the longer giveaway session ever 😀
All speakers received a t-shirt of the event that most of them used during their sessions, and all volunteers received a personalized aluminium bottle. Then we gave away for lucky winner a few of these t-shirts, many aluminium bottles, SAP Press e-books, a portable power bank, a backpack and a notepad.

It is time to talk about community #SITSP is a blog of one of the speakers and very active participant, who started many good discussions. Fausto had his own session and also shared a session with Marssel. He is sharing his sentiment about the event and about community.

Some of the attendees shared their experience also on LinkedIn.

There were more than 500 tweets mentioning #sitSP from July 8th until 10th.

To wrap up the event we took a picture of the volunteers, speakers and organizers who were still there (the first photo in the beginning of the blog), and a picture of the whole attendance who was there until 6pm on a Saturday. Community rocks! And as I said before in one of my blogs, Community matters. 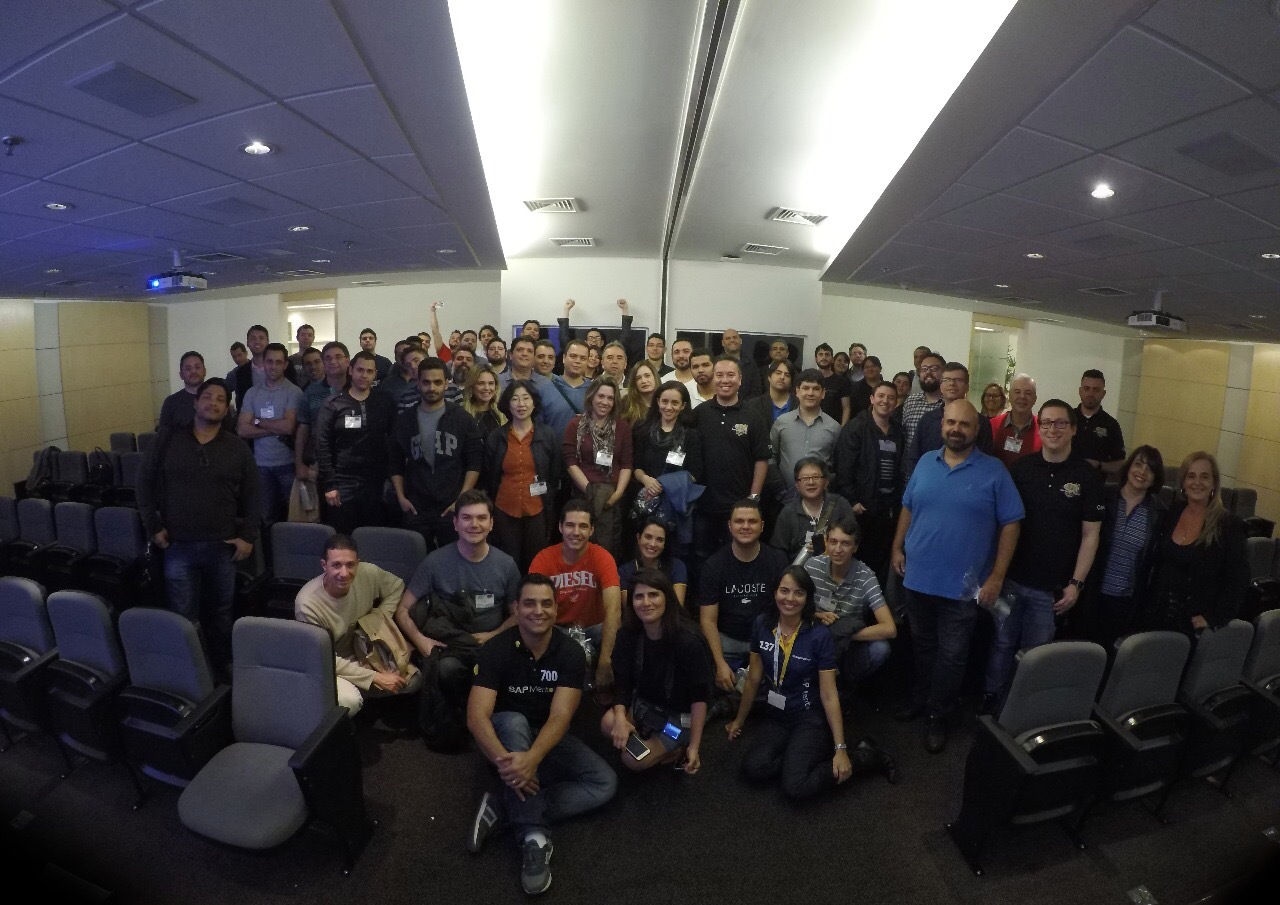 A big thanks to sitSP sponsors Cast Group, Private Training and SAP Press, who provided the catering and the gifts, and to SAP Brazil for hosting the event.

Some of us stopped by a Bar to celebrate another successful event. 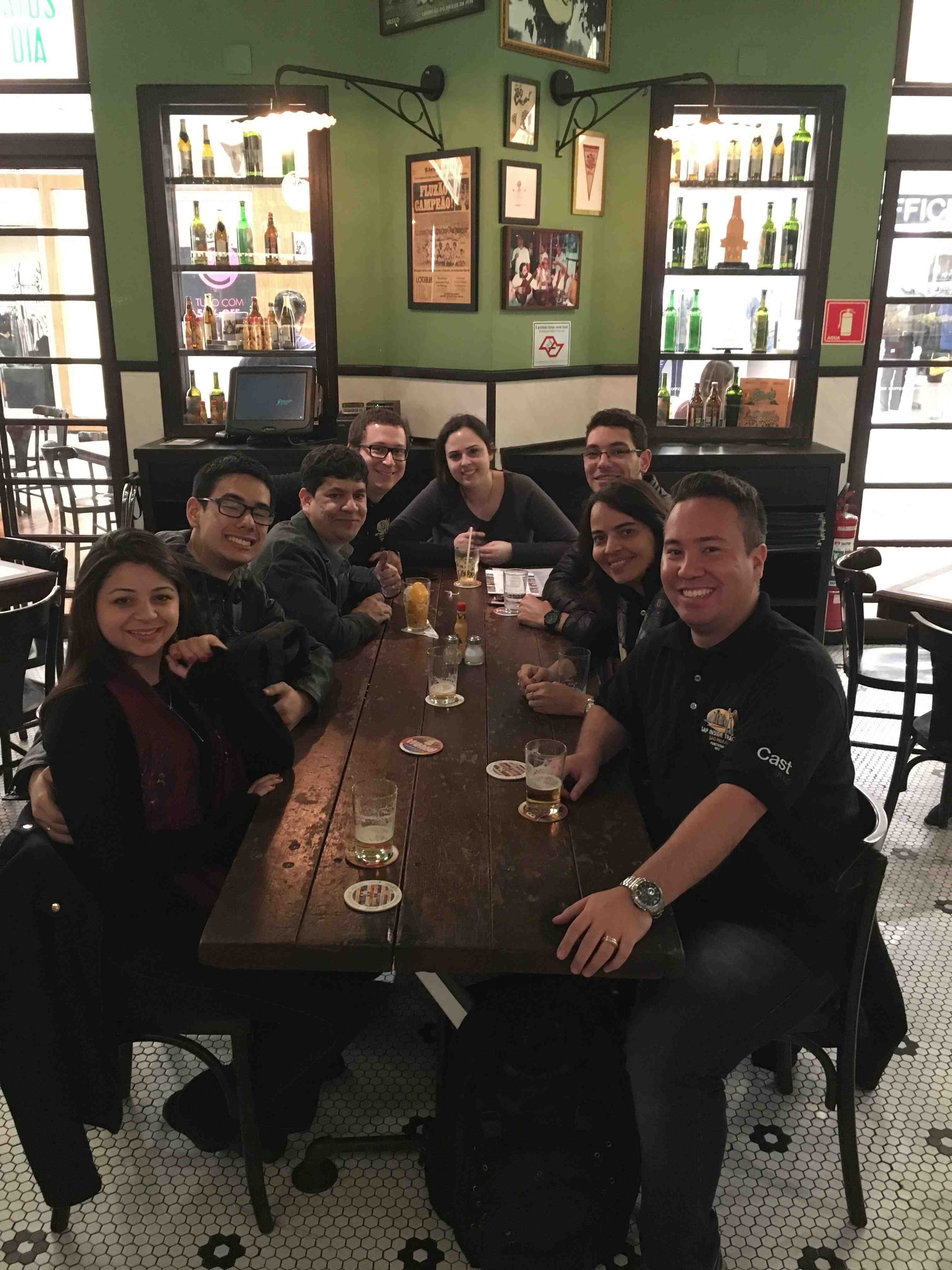 Looking forward to sitSP Developers in December. See you! 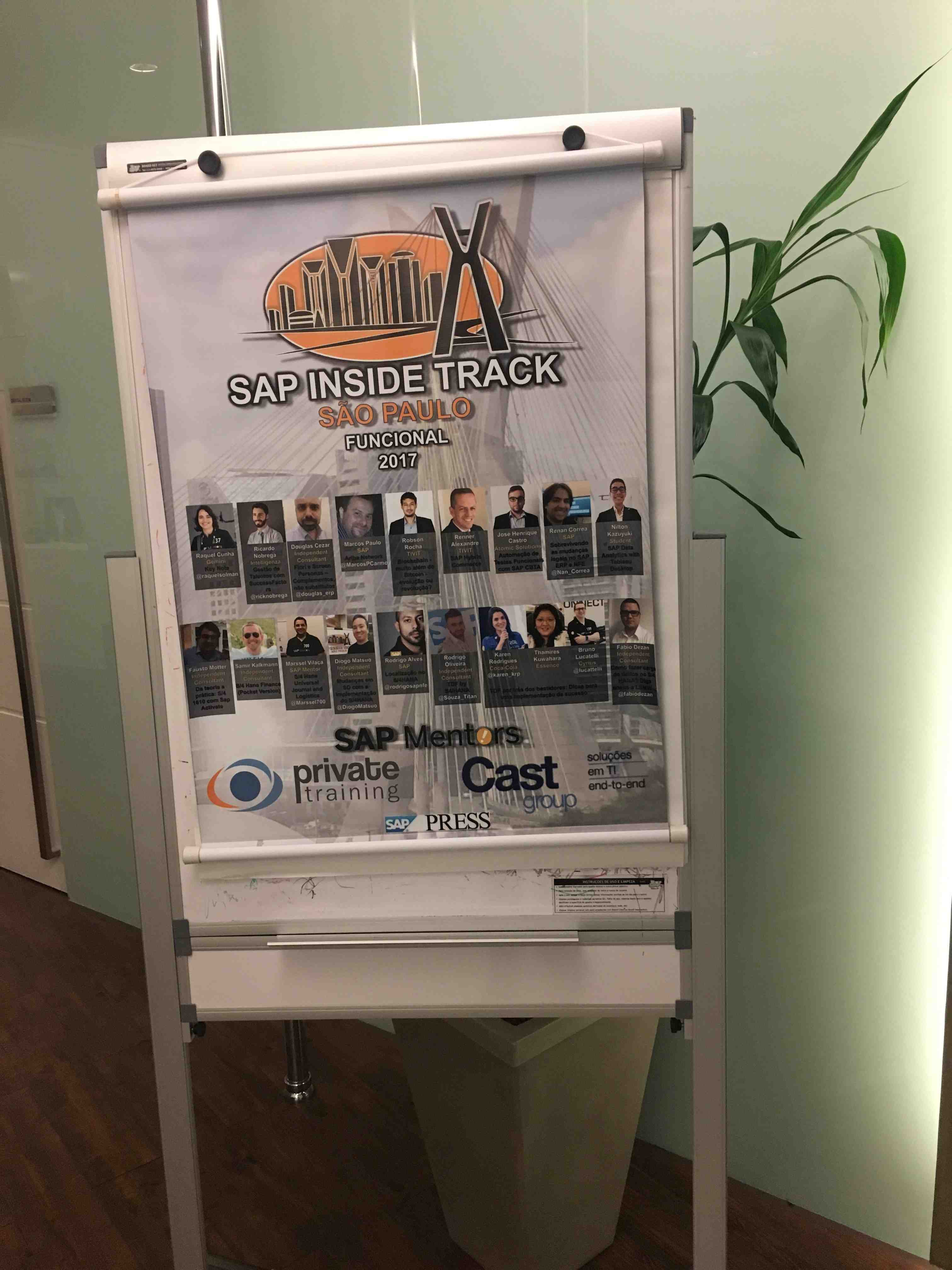 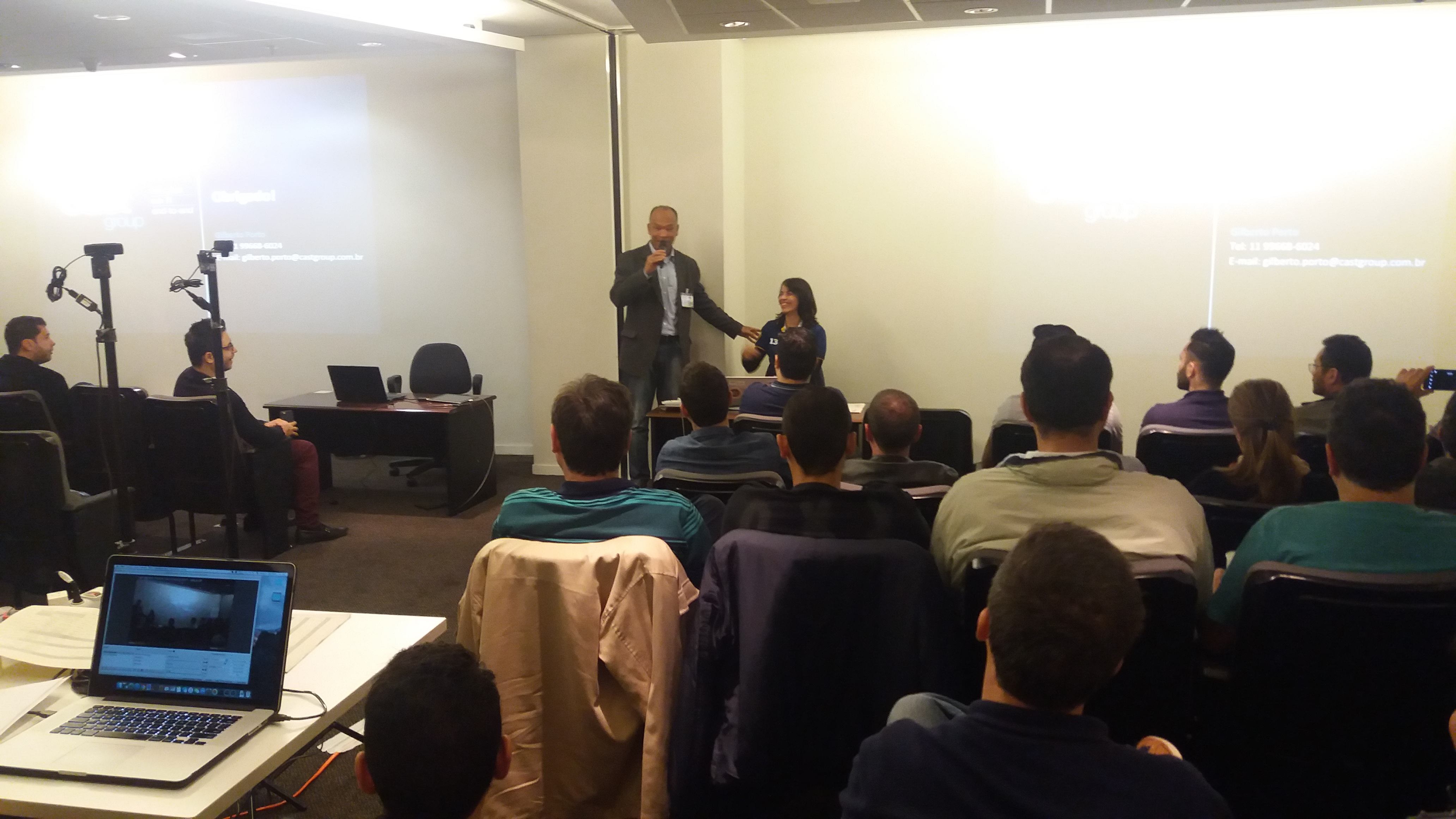 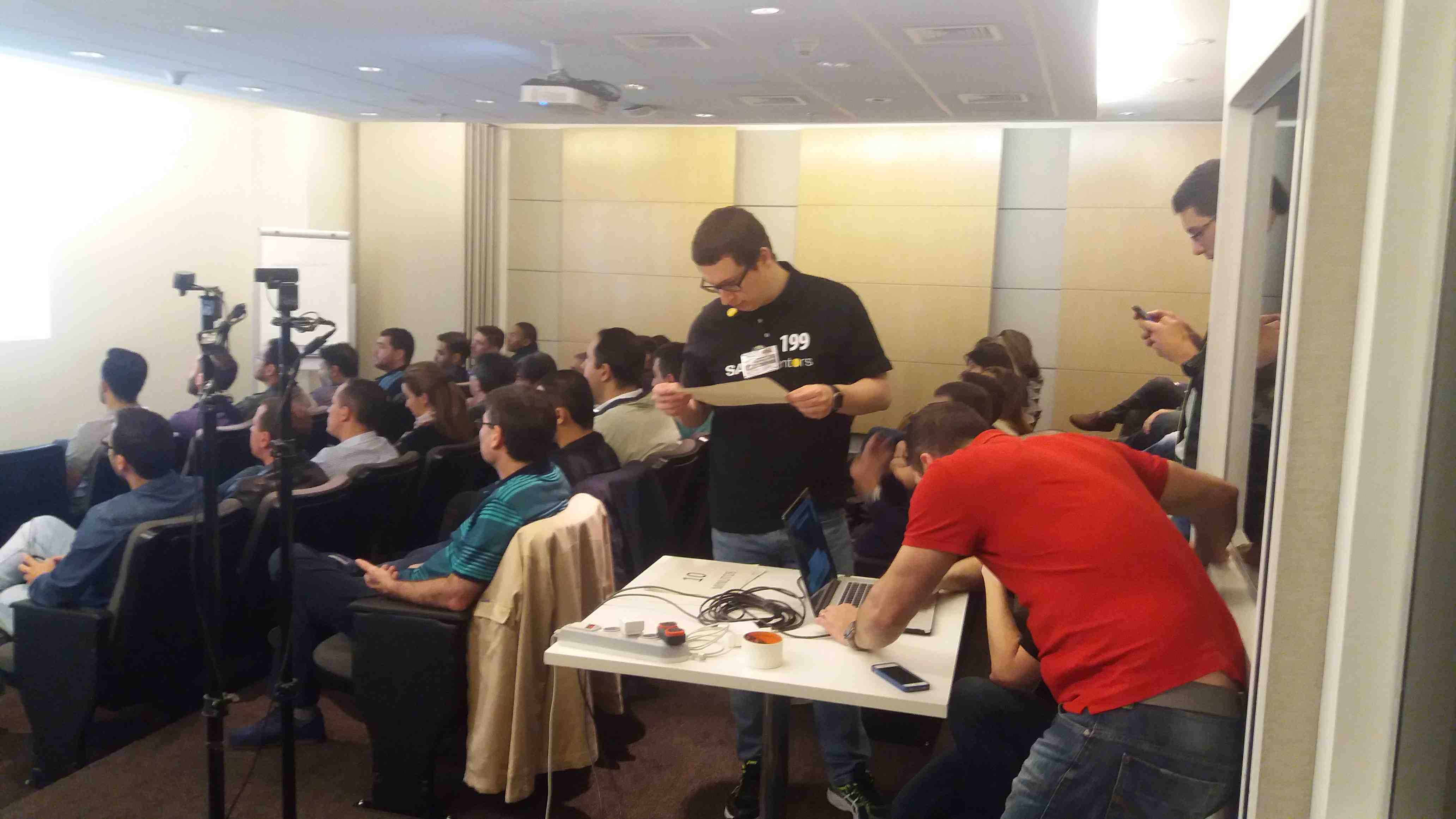 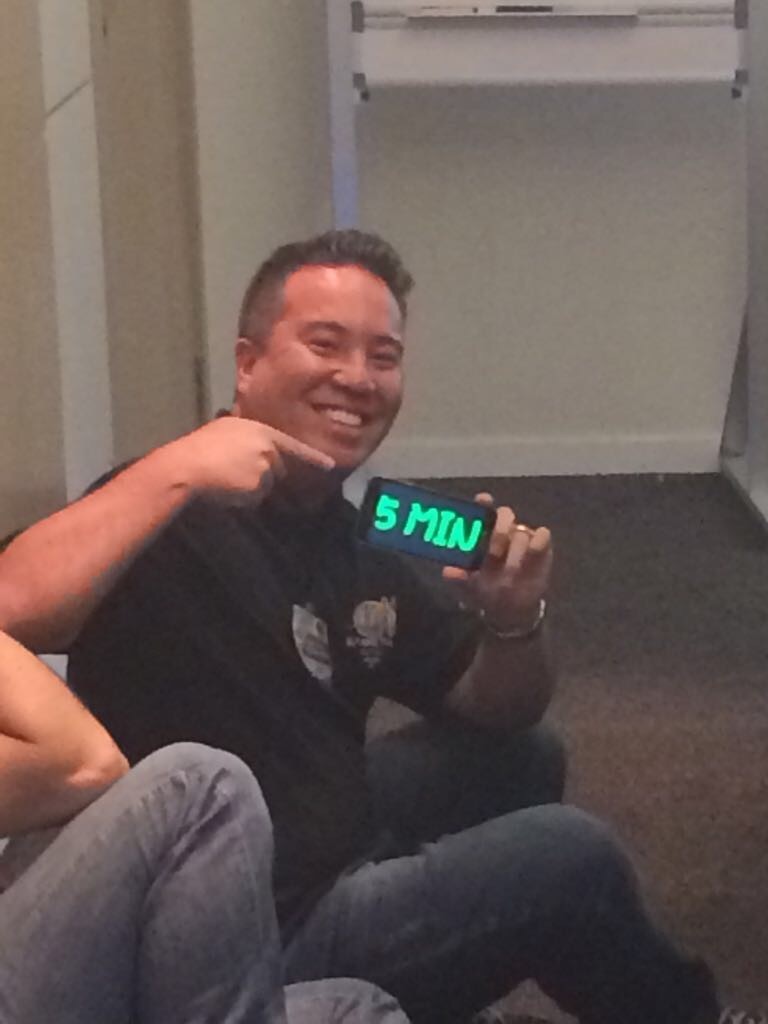 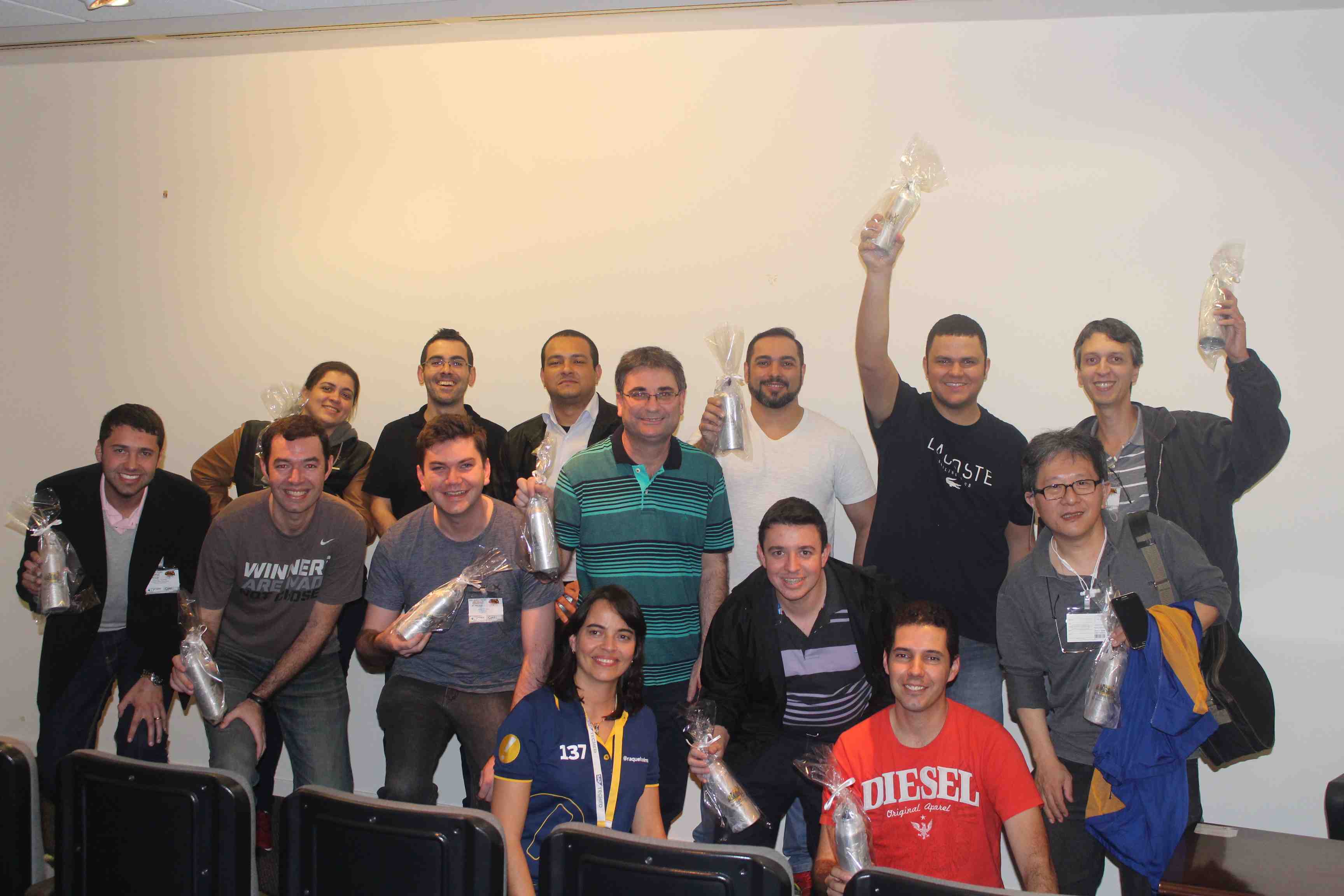 Personally I had the best SAP Inside Track ever! This was a great team work of all organizers involved

The feedback of participants that I had in touch after the event was the best I have had.

We also had a extra amount of work during preparations and thanks to Raquel for leading the actions. You are nothing less than the most inspirational participant in SAP Latin America Community.

Thank you for your kind words

We are a great team indeed and are part of a great community. I also received a very good feedback about the event. Every year we have more people interested in participating not only as attendee but as staff to help us make an event even better, because the seed planted by Marcelo in 2009 kept growing successfully with the help of other community members like the other Brazilian SAP Mentors and friends, including you and me

and now the event has a strong name. I got inspired by those who started this journey. I really like to promote these events to provide access to information to those who may not have another place to go, and to help find stars that may be hidden, and make them shine. I like this sentence: “It is a fine thing to have ability, but the ability to discover ability in others is the true test.” – Elbert Hubbard

Thank you also for your efforts not only as sitSP organizer and speaker, but also for keeping helping to bring SAP Inside Track to other Latin America countries and other regions of Brazil.

That's a fantastic quote Raquel! SAP Mentors do a great job with SAP Inside Tracks to help people reach their potential, or "learn how to learn." It has been said by others that "hidden talents are lost opportunities."

Congratulations to you, Marssel and long list of others for such a successful event!

Thank you very much Jason! We ate trying to pay it forward