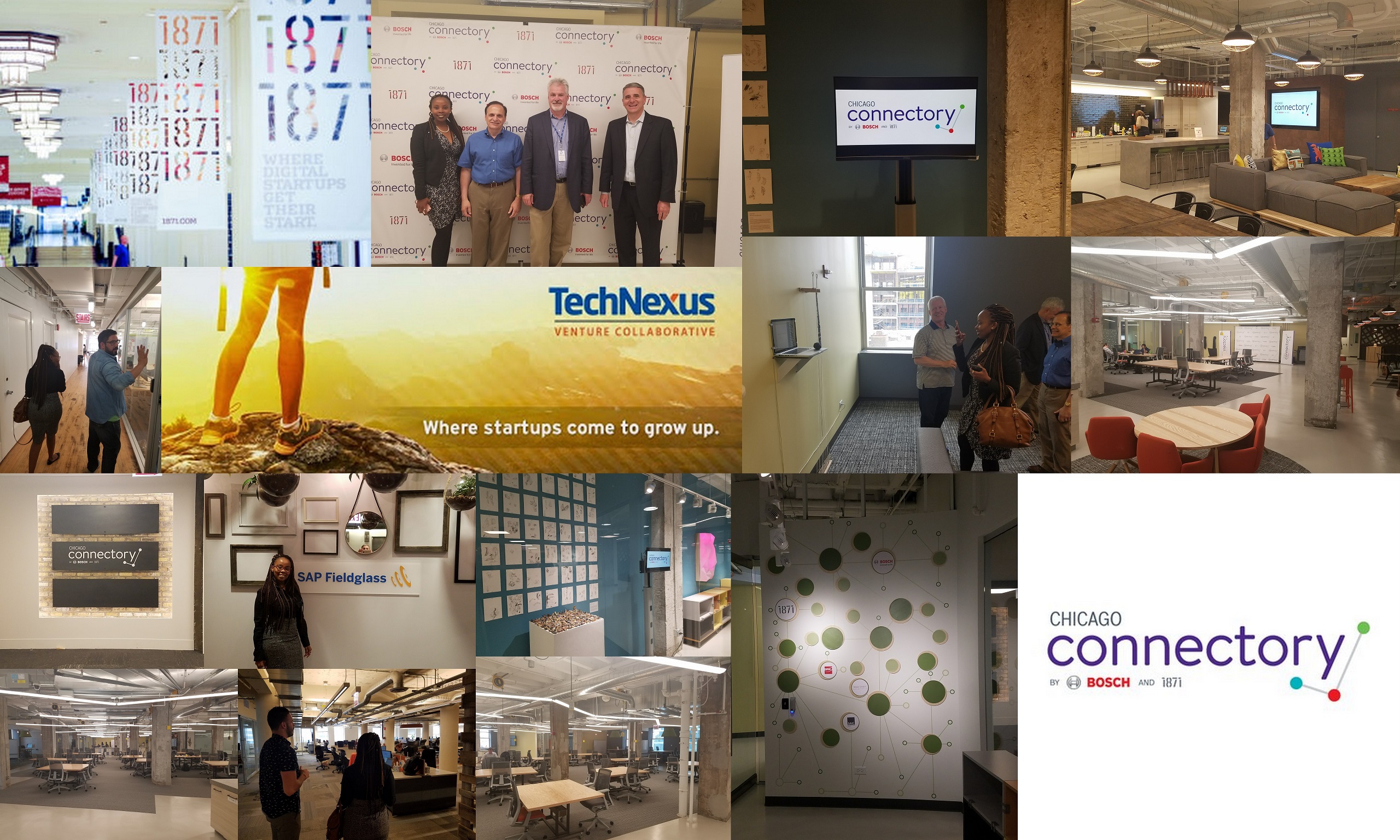 Earlier this month I had the distinct privilege to escort my SAP colleague Kwena Mabotja around several of the Chicago Innovation Hubs to help her learn more about our ecosystem during her participation in the Mandela Washington Fellowship at Northwestern University this summer.

I have included a short blurb on each of our stops below to demonstrate the diverse and vibrant ecosystem in Chicago. We were joined by SAP’s Dave Fowler and Professor Matt Liotine of the University of Illinois at our first stop listed below.

Covering nearly 20,000 square feet in Chicago’s historic Merchandise Mart, the Chicago Connectory is a co-creation space and IoT incubator boasting cutting-edge technology and security, expert programming, and mentorship from leading experts in IoT. More than a co-working space, the Chicago Connectory offers partners a co-creation model that fosters collaboration, networking, problem solving, and a new way of doing work in the age of connectivity.

The Chicago Connectory is a partnership between Bosch and 1871. Together, 1871 and Bosch are empowering an ecosystem to drive the future of IoT.

As a global leader in manufacturing, Bosch has a rich history of innovation. It began in 1886 as a startup in a backyard garage when Robert Bosch developed the first automotive spark coil. Over the following 130 years, the company has grown into a leader in industrial manufacturing, admired worldwide for its quality products ranging from automotive components and power tools, to home appliances and sophisticated sensor technology. Now, as the digital era transforms our world and billions of devices are linked to the Internet, Bosch is developing its strengths in manufacturing to bring new capabilities to a connected world.

Connectory is a wordplay on connecting and factory, two central elements of Bosch’s vision for IoT. It is a space where connections happen — among devices, people, and ecosystems — as the world prepares for the future and digital transformation.

TechNexus is a venture collaborative of entrepreneurs, investors, and industry leaders. Since 2007, we have advised and mentored 450+ enterprise-focused ventures that have attracted $400M+ in capital. We help them rethink growth. Over that time, we’ve learned what makes tech innovation work—especially how established companies can disrupt their own businesses by focusing on seed enabled innovation and engaging in the entrepreneurial ecosystem. But the model for doing so is broken. “Shopping” for innovation rarely works. Entrepreneurs often lack visibility into the real problems businesses need to fix. And technology disruption is coming faster than ever—entire industries are being redefined by entrepreneurs and engineers operating “outside” the innovation status quo.

The story of the Great Chicago Fire of 1871 isn’t really about the fire. It’s about what happened next: A remarkable moment when the most brilliant engineers, architects and inventors came together to build a new city. Their innovations – born of passion and practical ingenuity – shaped not just Chicago, but the modern world. What started 140 years ago continues to this day.

Founded in 2012, 1871 was created to support Chicago’s digital startup community. Since that time, it has become the hub for the city’s thriving technology and entrepreneurial ecosystem. Today 1871 is the home of more than 400 early-stage, high-growth digital startups. Located in The Merchandise Mart, this 120,000 square foot facility is also the headquarters of nationally recognized accelerators, industry-specific incubators, tech talent schools, the Illinois Science and Technology Coalition — the state’s leading technology advocate, a number of Chicago-based VCs, and satellite offices for Northwestern University, University of Illinois, University of Chicago, Loyola University Chicago, Illinois Institute of Technology, DeVry University, and DePaul University. Chicago’s brightest digital designers, engineers and entrepreneurs are shaping new technologies, disrupting old business models, and resetting the boundaries of what’s possible.