Picture this scenario; you have been tasked with writing some code that creates a sales order in the system. You choose to use a standard BAPI provided by SAP. Nice, clean code that is running in production.

Then, a few weeks later, an application consultant informs you that the business needs have changed for one customer only that uses the solution; they need a check first that the material ordered is in stock in a quantity suitable for one delivery – don’t create the order if that is not possible.

So you modify your original solution and add a bit of complexity. Not much, just one ‘IF’ branch and some handling logic for that one customer only. No problem.

The next week a new requirement appears in your email; If the delivering plant is greater that 500 km from the Ship-to party and the order is of a certain type, do not create the order. More checking code goes into your original, elegant solution.

Two weeks later, another check requirement to implement; a month later one more. By now, your code is beginning to ‘smell’ a bit – not your fault, how could you have known these little checks and subsequent implementations were going to add additional complexity to your once clean code, whose only single responsibility originally was to create sales orders from the data provided.

One year down the line of this, and the code has gone from being somewhat inelegant to virtually unmaintainable; the checks have formed a morass of spaghetti code that is hard to read through and understand what all of the business requirements were. Any additional logic may introduce unintended side effects that slip through regression testing, because there are so many paths through the code that testing becomes a nightmare; consultants have moved on, developers have moved on, and understanding the complexity of the code is a tall order indeed.

Not only that, but every time the code is modified, it means that the source code is opened up, edited and transported, adding additional risks that once tested code is inadvertently changed in an unintended manner, with the subsequent post-mortem to discover what actually went wrong after the code has been released to the productive environment.

What is the root cause of all of this mayhem? In a word, unpredictability. It was impossible to gather all of the requirements at design time, and if working according to agile methodologies this would not even be attempted. Requirements evolve over time, new customers and business conditions come onboard, so even if the requirements analysis had been completely comprehensive at the beginning of the design process, new requirements would invariably crop up.

In any case why leave it to the original code to do all of the checks? After all, it was designed to do one thing: create sales orders. Making it do anything else violates the first principle of SOLID design; the Single responsibility principle, which states that:

“There should never be more than one reason for a class to change.”

What if there was a way to separate all of these code checks out into smaller, independent units of code that could be swapped in and out of use, without recourse to opening up the original code and recompiling it? What if those checks could be re-used, eliminating repeated code? What if some customers needed some checks that others did not.

What if the code could be prevented from the ravages of code rot from the outset?

I am indebted to Steve Smith who is the originator of  this design pattern.

The rules pattern was specifically designed to address this scenario:

My implementation of the rules pattern goes a little further than the original pattern, so I’ll break it down into sections, then see how they all work together at the end. At the core of all of this is a single component conceptually identified as a Rule.

A rule is a fundamental, atomic check for a specific condition or state of a system. In plain English, it’s a check that a certain condition can be fulfilled.

Rules typically need to be set up, i.e. be provided with information about the state of the system, and executed, to evaluate the outcome of the rule.

The basic architecture is shown below. Let’s have a look at the salient features of the diagram above. We have:

The contract definition for the rules. Contains two methods: PREPARE() and EXECUTE().

PREPARE(): Prepare the rule. Pass in any needed data that is necessary for the EXECUTE method.

Here’s an example of a simple PREPARE() statement:

The cast is due to the fact that I am passing in an object of a known type that needs to be explicitly stated in this example. The important point is that I am just setting a sales order document number and sales order item number in this statement, nothing more.

EXECUTE(): Execute the rule. Note the parameters that the method returns:

EX_STATE returns one of three levels: PASS, FAIL or WARN, referring to the state of the rule after evaluation.

EX_ABORT is an indication that whatever happens with the other rules, setting this to ‘TRUE’ is enough to prevent any further rule checks since whatever happens; it’s a kind of system level ‘all bets are off!’ indicator.

There is a reason for this; in my implementation, if a rule fails, I may wish to carry on processing but perhaps skip an operation (say, creating a sales order, because one already exists); on the other hand, if the method returns EX_ABORT = ‘TRUE‘, it means just give up on processing because whatever happens, the process will not succeed (say, a vendor batch number is passed in that does not match a batch in the system). I could have added another level to EX_STATE, but I find separating the signals out this way clearer to understand in the program.

Here is an example of a simple EXECUTE() statement:

A couple of points to note:

Although not strictly needed, since any class can implement the needed interface ZIF_RULE,

the abstract class ZCL_RULE can be used to implement the interface and all other rules can inherit from it; this leads to a neat way to implement new rules without the need to recompile existing code, as I will show in a later blog.

These are the classes that implement a particular rule.

The Rule Builder does just that – builds the rules to be used.

The purpose of this interface is to put the rules together for use in a specific code location.It contains two methods: BUILD_RULES() and GET_RULES().

BUILD_RULES() creates an instance of each rule that is to be executed, and invokes the method ZIF_RULE~PREPARE() on each rule.

Here’s an implementation of BUILD_RULES():

GET_RULES() returns the list of rules, ready to execute. This is very straightforward:

Responsible for deciding which rule builder to build, based on arbitrarily chosen input parameters; it could be anything needed to discriminate which Rule Builder to fabricate. It only has one method – MAKE_ZCL_RULE_BUILDER(), returning the appropriate Builder.

Here’s an example of the implementing code that uses an EDI partner as a parameter:

This is the final part of the puzzle; the Rules Evaluator: 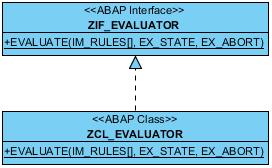 The Rules Evaluator is a stand-alone utility class that has one job only, satisfied by the EVALUATE() method – to parse the rules passed into it and return EX_STATE and EX_ABORT. It can be used for any collection of rules in a table of references to rules.

This is the current code for the evaluator:

Putting it all Together

Having explained the components in detail, it will probably add clarity to see it in action.

Below, I have some code that is responsible for processing an inbound IDOC message. Part of that functionality is to create a sales order as part of a multi-step process of:

The Sales Order is to be created provided that:

So how does it get executed? At run time, the code that handles the IDOC builds the rules and then evaluates them as follows. First, the Rule Builder Factory is invoked, in order to build the correct set of rules for a particular customer:

Which invokes the factory to create the correct rule builder for the particular partner:

Then the rules are prepared and returned:

Which is implemented thus:

Finally the rules are evaluated:

Here is the code in the method:

Note from the above:

My thanks to Steve Smith for publishing the Rules Pattern, which was a module that he contributed to Pluralsight’s Design Patterns library.