The intention of this blog is to explain the available SAP S/4HANA Transition options including their technical tooling, so that customers planning to migrate to SAP S/4HANA can make the best individually suited decision for their system landscape.

With the the publication of the SAP White Paper ‘Mapping Your Journey to SAP S/4HANA – A Practical Guide for Senior IT Leadership‘ this Blog has become an SAP official successor. Therefore this Blog will no longer be updated.

I have structured this blog as follows.

At first I want to set expectations, that I want to focus here on those cases and resulting choices, where there is already an existing SAP ERP System which shall be replaced by an S/4HANA System.
As replacing any non-SAP / 3rd-party System with SAP S/4HANA means always a new implementation, we can leave this out of this discussion. In that case the only choice to make is about the deployment option, whether it shall be on premise or cloud (public or private option is possible).

1.Things are different in SAP S/4HANA !

The point is, that there are some incompatible changes between an SAP Business Suite ERP System and a SAP S/4HANA system:

A SAP S/4HANA System is

Therefore if you intend to replace your existing SAP Business Suite system / system landscape by SAP S/4HANA, you have to be aware that this is not just a release update.

So, what are my options?

The picture below summarizes the three main transition scenarios, which SAP offers: 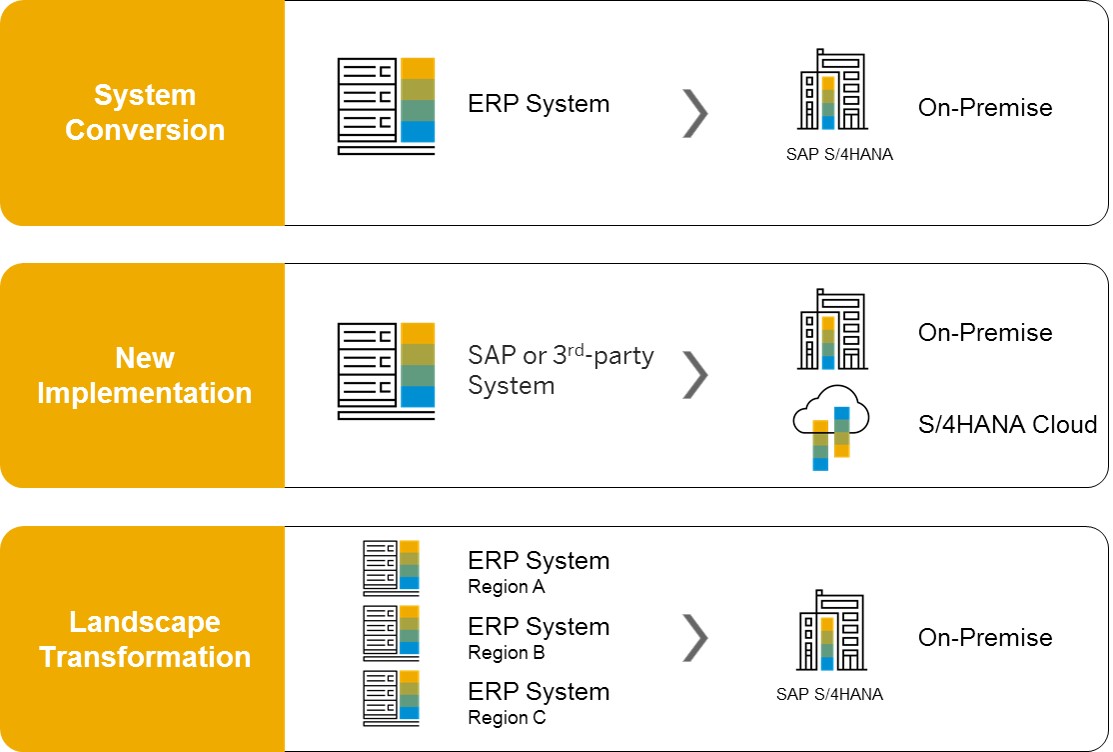 We will now have a deeper look on each of the transition scenario option:

You would choose this option if your main goal is to bring your current business processes to the new platform, and/or you want to keep your investment in custom code.

A third reason for this option could be, that you want to mitigate the risk and investment of a big bang conversion project by reducing the scope of the transition project to a pure (as much as possible) technical conversion project, and plan to adopt new innovations at your speed at a later point of time and in a phased approach.

Technically seen system conversion is a complete technical in-place conversion of an existing SAP Business Suite ERP system to SAP S/4HANA, that means, that this process changes an existing system into an S/4HANA system.

The following picture illustrates the technical system conversion process from the planning over preparation, execution and post processing steps::

This scenario describes a fresh, new installation of a SAP S/4HANA system (either on-premise or cloud-based), also known as “greenfield” approach.

This option is perfect if reengineering and process simplification based on latest innovations are your primary focus.

Benefits for the customer are

The project duration depends on

This is a kind of value driven, selective data migration to the new S/4HANA platform. So the focus is not on migrating a whole system, but rather on pick & choose of entities which you want to carve out and move on to the SAP S/4HANA platform.

Therefore there are several sub-scenarios available:

Customers who want to consolidate their landscape or to selectively transform data into a SAP S/4HANA system.

In principle, Landscape Transformation is not really a either-or-option in comparison to the system conversion or new Implementation scenario.

As it is a data migration option it requires, that, as a pre-requisite, there is a target system available into which the data shall be migrated. This target system can be realized by a fresh system install like a greenfield approach (new implementation scenario with/without a initial data load), or, in case of a system consolidation effort, the target system can be created by executing a system conversion on a suitable SAP ERP system.

Having the target system in place, the Landscape Transformation option migrates (additional) data into that SAP S/4HANA systems independent from their origin or their purpose.

Important to note: Other than the system conversion scenario and the new implementation scenario, the landscape transformation scenario requires currently a service or consulting engagement with SAP.  There is not generally released toolset with documentation available which you can use to configure, test und execute your own, individual data migration to the SAP S/4HANA platform. The currently available tools and technology are only available via SAP Value Assurance Services or Consulting service Engagements.

Here is the link to the: Transition to S/4HANA Roadmap Viewer

3.Comparing the Paths to SAP S/4HANA

After this scenario explanation you may still be curious about more influencing aspects, which may help you with your individual decision.

3.1. Aspects/questions influencing the choice of the deployment options 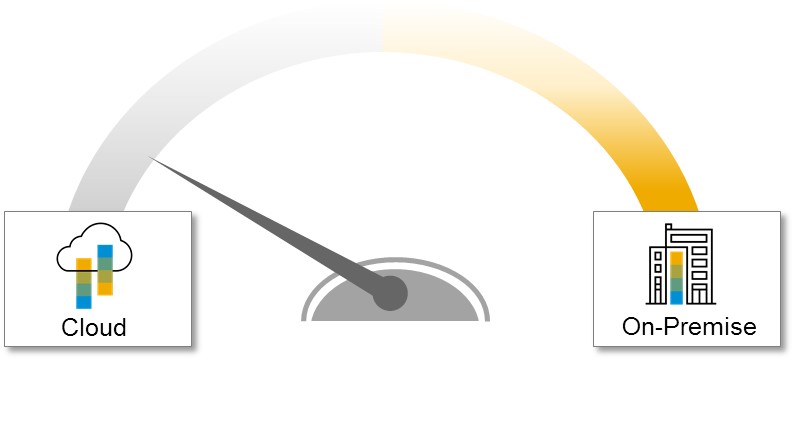 Cloud vs. on premise:

Arguments for a New Implementation:

I would like to recommend reading the document “Elements for Designing a Transition Roadmap to SAP S/4HANA” provided by our IT Planning Service colleagues. Here’s the SCN blog describing the purpose of the document. The document can be directly accessed based on the following link: https://dam.sap.com/mac/download/ad/OymUv.htm

More useful links in the context of the ‘transition to SAP S/4HANA’ topic are listed below:

(This section will be continuously extended…)

Thanks for such a well documented blog and the weblinks. Do you have an idea if there is any upcoming webinar on this topic.

Looking forward to the series

Thanks a lot for your positive feedback!

At the moment I do not know of any concrete webinar session, but I will check.....have you already checked for interesting sessions on the SAP S/4HANA Hub?

Thank you, It is a good blog to understand the S/4HANA conversion from ECC system, and have already shared it with my team.

I am wondering if Customer uses ECC6.0 and APO and considering the covert to S/4HANA, how can we convert APO objects?

Is it available to apply the conversion tools for APO.

Not found the regarding issue.

where can i find Information of S/4Hana 1709 on Premise?

Are there any new Tools or Information on System conversion to 1709?

Our company evaluates the possibility of merging two Business Suit landscape into one S/4HANA. I saw the “build-up multiple client system” approach. What technically this would mean? With the “old fashion” way I cannot imagine this approach. What happens with the client independent objects?  The two source systems are ECC landscapes with different switched on functionalities. Can this “merge” step conserve the different program and repository environment or this “merge” approach would also involve a BPR and repository harmonization to let the two client work properly?

Thanks Roland. really very nice blog for starters in SAP S/4 HANA Like me. Simply Awesome.

Keep on posting blog like this.. it would be more useful to all.

Thanks for your effort.

Extremely good article with more practical insights!! I have published your article on my Linkedin so that more peoples should be get benefitted.

Thanks for your information.  I have 1 question.

1 Japanese customer is planning to convert SOH (SAP Suite on HANA) to S/4HANA.  Then implement Central Finance on S/4HANA environment.  According technical view in your description, it seems technically feasible.   Is my understanding correct?

regarding the Landscape Transformation path, you mentioned as below:

"...The currently available tools and technology are only available via SAP Value Assurance Services or Consulting service Engagements, and only at a later time (currently planning is end of 2018), a data migration platform product will be released, which will cover selected data transformation scenarios to be executed by customers and partners without SAP Service engagement... "

May I know this data migration platform product has been release? where can i find more information about this product?

Thanks for your valuable blog.. I have one Q in that landscape transformation mentioned as Multiple ECC systems to S4HANA ON PREMISES.. Can we use same mechanism for s4hana cloud