Getting Started: Developing and deploying apps on the SCP Cloud Foundry Runtime

Cloud Foundry (CF) has been a global cloud-native application development standard for a while now and by announcing the general availability of the CF environment for the SAP Cloud Platform (SCP) in May 2017, SAP opened the gates to a whole new realm of applications.

Cloud Foundry helps developers focus more on the development tasks and eases the process of deploying and managing applications.
To gain a much broader perspective on how CF brings a new and innovative direction to SCP, please refer the below-specified blogs.

The main focus of this blog is to assist developers in getting started with application development and then deploy those apps on the SCP CF environment.
In order to know the steps to creating an account in the regions supporting CF environment and getting started with using the CF command line interface (CF CLI), please have a look at the detailed tutorial: Getting Started with Cloud Foundry scripted by Jonathan Baker.

This blog is mainly targeted for developers, having a background in developing apps for SAP on-premise solutions using ABAP, XSJS, SAPUI5, SQL scripting, etc., looking forward to getting started with application development on SCP CF environment.

As part of this blog, we would be creating a simple Java-based REST API (using Spring Framework) and deploying the same on the SCP CF runtime.

Before we dive into the actual app development, here’s a brief introduction about Cloud Foundry.

Cloud Foundry is an open-source platform as a service (PaaS) that provides you with a choice of clouds, developer frameworks, and application services.

CF allows you to run your apps on your own computing infrastructure (as done in the case of the XS Advanced runtime), or deploy on an IaaS like AWS, Azure, GCP, vSphere, or OpenStack.
In reference to SCP, the IaaS providers available are – Azure, AWS and GCP.

Apart from this, it also brings with itself the freedom of scripting applications using frameworks and programming languages of our choosing and binding them with various other backing services (Rabbit MQ, Mongo DB, Redis, etc.) made available as part of the platform.

The CF runtime entirely manages the infrastructure and the deployed apps and services, thus not only reducing the costs but also significantly lowering the time to develop and deploy applications in the cloud.

The best part of it is that it allows the developer to focus more on the task which is most dearer to him, Application Development, rather than on deploying and managing these apps thus making the life of the developer easy and improving productivity.

There is a plethora of documentation content available at docs.cloudfoundry.org, it is recommended to go through it once just to get a basic overview of CF.
Getting to know the Cloud Foundry Concepts is the best way to start off.

A full-fledged application deployed in the cloud might consist of multiple components such as the front-end, application logic or db modules. Now, when deployed in the cloud, these modules are deployed separately in their specific runtime containers (web, application or db servers to be more general) and are inter-dependent on each other for operating as part of one single application in whole.
Even though these components or modules are parts of the same single application, they have their own separate development lifecycle and managing them could be difficult and challenging at times.
Thus enters the concept of multi-target applications.

Multi-Target Application or MTA is essentially an application consisting of multiple parts or modules which, even though created with different technologies and deployed to multiple targets, still share a common lifecycle and can be managed as one single logical unit and as a coherent application.

To gain a much broader perspective on MTAs, please refer the documentation for the same.

Before starting with the application development, let’s have a look at the development environments that can be utilized for developing apps for the CF runtime.

But apart from using the webIDE, any of your favorite IDE (such as Eclipse, Sublime Text, Visual Studio Code, Atom, IntelliJ IDEA, etc) can also be used to develop and deploy applications to the CF runtime.

The approach described as part of this blog is independent of the development environment used.

Getting to the core of this post, let’s start with the actual app development.

As specified earlier, we would be developing a simple Java-based REST API using Spring Framework and deploying it to the CF runtime.
The REST API would accept a parameter named ‘name‘ and when queried would return back a response message saying – ‘Hello, <parameter_name_value>. Ready to develop and deploy apps on the CF runtime ?‘.

For example, the query – ‘<rest_api_url>?name=John Smith‘ would return back the response message – ‘Hello, John Smith. Ready to develop and deploy apps on the CF runtime ?‘

Before starting off, it is better to have a basic understanding of Java and the Spring Framework but it is not necessary. Not only java but also web, node.js and hdb modules can be deployed to CF using the same approach.
The main purpose of this app development exercise is to help developers gain perspective on deploying apps to the CF runtime, period.

So, let’s get started.

This concludes the application development part.
As specified earlier, this development exercise is just to gain some perspective on deploying applications to the CF runtime. Applications created in other languages and frameworks of your choosing can also be deployed to CF in a similar manner.

Congratulations, you have successfully developed and deployed a Java-based REST API on the SCP CF runtime.

This application has also been made available on Github. Go ahead, clone it, deploy it and let Me know your feedback.

If looking for a node.js implementation of the same REST API, it can be found here. 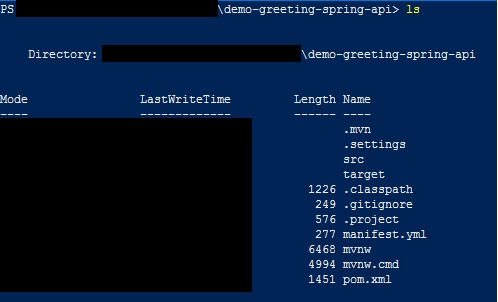