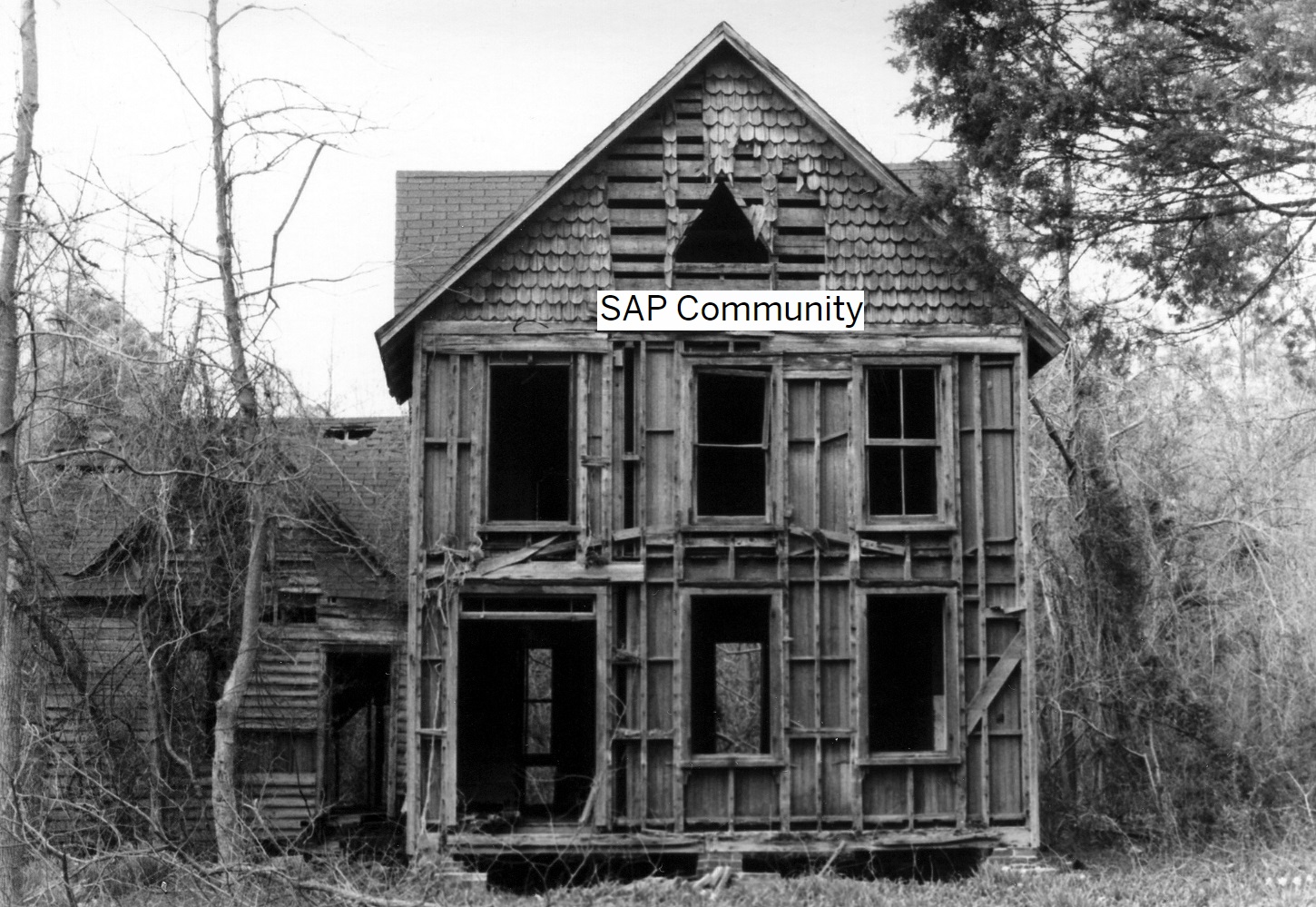 About 5 years ago my phone rang and caller ID showed an unfamiliar number with New York area code. At first, I thought about just letting it go to the voice mail (I get a lot of sales calls) but moved by a mysterious force I picked it up. On the other end of the line was none other than Marilyn Pratt of SAP, The Godmother of SCN. Can you imagine getting a surprise call from Lady Gaga or Dalai Lama? It felt exactly like that.

We talked for what seemed like an hour about SCN, how everyone was frustrated with the recent migration (lol, we had no clue what was coming in 2016) and, most importantly, what could be done to help the Community get back on track. As a result of our conspiracy, my first SCN blog was born.

Some of you might remember that before 2012 there was SDN (SAP Developer Network). Blogging on SDN was somewhat restricted and at least the first blogs were subject to review and approval by the moderators.

On SDN, I’ve never attempted to become a blogger for a variety of reasons. There were enough heavy-weight bloggers without me (mind you, those were the times when Thomas Jung and Rich Heilman made regular appearances in the ABAP forum), I didn’t like the idea of getting a “stamp of approval”, and I was quite content using a personal blog to scratch an occasional writing itch while getting enough SDN “pinots” by answering questions.

When SDN evolved into SCN, the floodgates of blogging were opened, for better or for worse. The BIF initiative was sweeping the community and bringing into the spotlight many reluctant bloggers, myself included.

It was the time of the infamous “poetry blogs”, the “Top Liked” blog charts (that I managed to crush a couple of times), heated discussions in the comments (e.g. “OOP vs. procedural”) that sometimes resulted in more and more blogs. On SCN, I enjoyed certain blogging fame, for which I’m eternally grateful to Marilyn and every SCN member who found time to read my blogs and share a comment or just click the Like button.

Here we are, no longer SDN or SCN but “SAP Community” (SC?). Blog pre-moderation for newbies is back. No more “top liked”, no BIF and, sadly, no more Marilyn either (she’s not dead though, merely retired but still). All around post-apocalyptic landscape.

I have not posted a blog on SCN since January. It’s not like I ran out of the subjects. I’m pretty sure someone might enjoy reading about the ABAPosaurus’s struggle with OOP, for example. Or I could give another dressing-down in “Are you there, ASUG?” or follow with a sequel like “Y U No Love Leonardo?”

But instead of staying up late writing the SCN blogs I end up playing with virtual farms and restaurants and even contemplating posting a blog on LinkedIn. (And John Appleby already beat me to it, darn!)

What is happening?! Well, let’s see.

To invest time and emotional strength in blogging, some sort of reward needs to be involved. Of course, once in a while a subject comes along that we would feel much passion to blog about no matter whether anyone reads it. But, let’s be honest, no one actually wants to continue dropping the blogs into some kind of a black hole. Eventually even the most clueless and prolific bloggers need some digital pat on the back to go on.

When SAP Community finally opened for business in 2016, I was eager to get back on the blogging train. But after posting 3 blogs to the lukewarm response and no perks like a badge or even sense of accomplishment, the enthusiasm started to wane. For some time, I shrugged it off. Perhaps the subjects were not as compelling as I thought or people still had trouble getting used to the new website. Who knows? But when I started noticing that my activity feed is not exactly abuzz with new blog notifications and there are blogs like this one, a suspicion that it’s not just my lousy writing sunk in.

There was a story shared some time ago by ASUG how the New York City wine store owners used “Big Data with IoT and Now 25% more Cloud” (c) to figure out if they should open the store later. My first thought was “hmm, why couldn’t they simply ask their employees?” but then I guess people could be biased while data is supposed to be objective.

Very well. On SC, I don’t have “Big Data with IoT”, unfortunately, therefore I picked a random sample of the SCN blogs posted within 2 random consecutive weeks. I used RSS feed to open the blogs and captured basic information about them in a spreadsheet. Then, 2 weeks later I visited the blogs again to check if any changes happened. Other than a view increase and two blogs already removed (and justly so), I did not see significant changes during the second visit. Yada-yada-yada, let’s see some numbers. 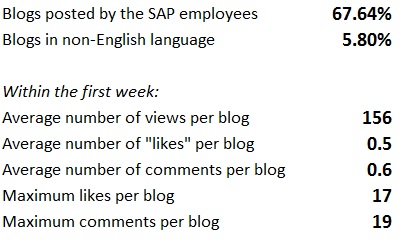 As luck would have it, in the chosen time period both Rich Heilman and Thomas Jung decided to post a blog. The numbers for the top 3 blogs were clearly much higher than in the average Joe and Jane’s blogs, so I also checked the numbers with the top 3 blogs excluded:

And the Action I Want You To Take… Uhm…

Dale Carnegie course (which I was forced to take years ago because I had “communication issues”) taught us to end a speech with “And the action I want you to take is…” clause. This would seem fitting here if only it was so easy.

Sure, some sort of gamification, possible comeback of @-mentions and some other features are on the roadmap somewhere over the rainbow. But imagine you are on a long road trip and you are hungry. Will it help you that McDonalds is on the map somewhere? Unless the map is edible, I guess not.

To be honest, at this point I simply do not know what specific actions could get me and others excited about blogging in the SAP Community again. And I fear that we crossed the point when we are not even looking for McDonalds anymore and moving on to Burger King or Wendy’s. Oh, that reminds me – I have a virtual restaurant to take care of! Gotta run.

*) Title shamelessly borrowed from the Scissor Sisters song I don’t feel like dancin’. Warning: the song might get stuck in your head for days.