We are students pursuing post graduation from Victoria University. This blog is a part of our curriculum’s assessment.

What is domestic violence?

Intimate violence, more commonly known as Domestic violence is a form of violence that can occur between people who share any sort of relationship with each other. Domestic violence can be of many types like physical, emotional, psychological, economic and mental. These varieties of abuses need to be examined in more detail to analyze a trend in these crimes over the past years. Physical violence is observed when a person of any age experiences bitting, slapping, beating by known individuals at various locations. Sexual violence is used by offenders to demean and control an individual (Smith & Powell 1989). Fig :1 No of incidents of Domestic Violence in different parts of Australia

The graph in figure:1 is depicting different regions of Australia and the total number of incidents of domestic violence in these regions. The key areas covered are Perth and New South Wales (henceforth, NSW). NSW is shown being one of the most prone regions for domestic violence with numbers as high as 59,833 . In 2014 and 2015 the number of incidents were highest in NSW follwed by Western Australia which was counted to be approximately 32,648. 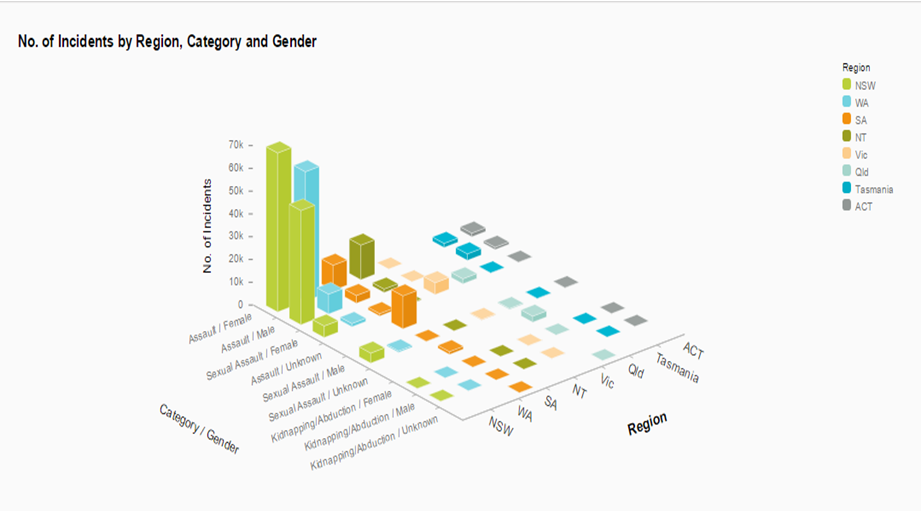 Fig: 2 No of Incidents by Region, Category and Gender

This bar chart in figure: 2 shows the number of incidents based on their category and gender in different regions of Australia. We can visualize from this chart is that majority of the incidents are either assaults or sexual assaults. Thus our study mainly focuses on these two types of domestic violence. We can also discover that the maximum number of assaults have ensued in NSW i.e. 70k and is followed by WA (Western Australia) with 60k being the next.

This slope chart in figure: 3 provides information about the number of incidents based on the region and the age groups of the people who have experienced domestic violence and the year in which these incidents have taken place. It is clearly visible from this chart that the majority of the victims are between the age group of 25-34. Maximum in NSW with count of more than 7,000 incidents then comes WA and then South Australia being the least with almost 2,328 incidents.

Fig: 4 No of Incidents by Relationship, Gender and Religion

This table in figure: 4 provides information about the number of incidents based on the relationship, gender and religion. This table clearly states that the maximum number of assaults were by accused who were intimate partner counting to 25,918 or by a partner (19,825 incidents). This clearly indicates that these incidents were performed mostly by the closely related ones. The other thing to notice is that maximum no of incidents happened with females in the NSW region.

Whereas, the victims of sexual Assault were majorly residential females

Fig No 5: No. of Incidence by Year, Gender and Location

The graph indicates the number of domestic violence cases based on the location of the assault and the gender of the victim over the period of three years. The major category of the victims were female who were assaulted in the residence. In 2014, the male victims were assaulted in the residence or in the community. In 2015, 69 cases of males were reported where the location was other than these two. The female victims were nearly five times more than the males in 2014. However, within the same gender, the increase in the cases of residential domestic violence was less than 500.

Fig No 6: No. of Incidence by Weapons

The major victims of domestic violence were threatened without weapons. A little more than 2% cases involved the usage of weapons. Most of the assaulters did not use any weapons to intimidate the victim.

Fig No 7: No of people experienced assault in last 12 months by Age

The youth aging 18-24 years are the major victims of domestic violence. A major conclusion from the above bar chart is that with the increase in age of the victims, the domestic violence experiences show a decreasing trend. 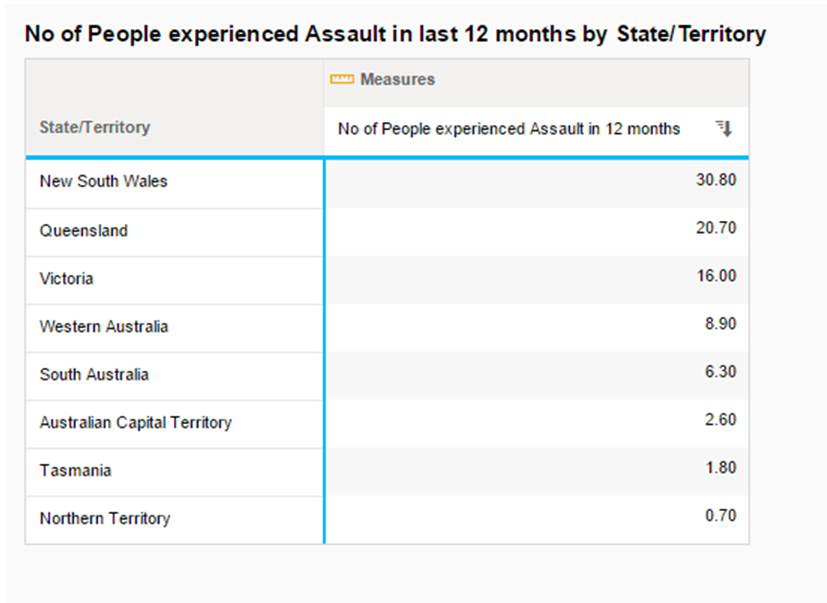 Fig No 8: No. of people experienced assault in last 12 months by State/ Territory

In the last twelve months, NSW again shows high numbers of victims of domestic violence. Queensland ranks second. These regions have cases which when added up are more than the rest all of the regions. This fact raises an alarm as the numbers are too high to miss our notice.