What to look for in a SF LMS Implementation – Part 1

So you decided to implement SuccessFactors Learning (LMS) in your company. Now this could be either a standalone or an integrated (with SuccessFactors BizX instance) environment. Though in terms of the functionality of the LMS system, there is no difference in the 2 types of implementation. However, the way data is fed to the system is different in the two implementation methods. Recently I had the opportunity to implement LMS with an integrated client. Through this blog series I want to share some experiences that can help consultants for future/current implementations. This the first part of a two series blog.

SuccessFactors LMS has tools called connectors which help in loading different types of data into the system. There are around 20 connectors that SuccessFactors provides for customers to upload data. Some of the common connectors are:

Data loaded via connectors need to follow a format which is can be downloaded from the system as a template. A configuration file called CONNECTORS has the mapping definitions which enable the system to load the data from the input file to the appropriate database tables. These mappings are configurable and a lot of time is spent by consultants in getting the right mapping.

The input connector files are prepared and placed on a secured FTP server (which is provided to customers). A batch program, which can be scheduled, reads the input files and the mappings in the connector configuration file to place data in the appropriate database table. Now the best part is that the system provides status of each upload which can help troubleshoot any errors. The error logs are pretty detailed and help pinpoint the erroneous data. 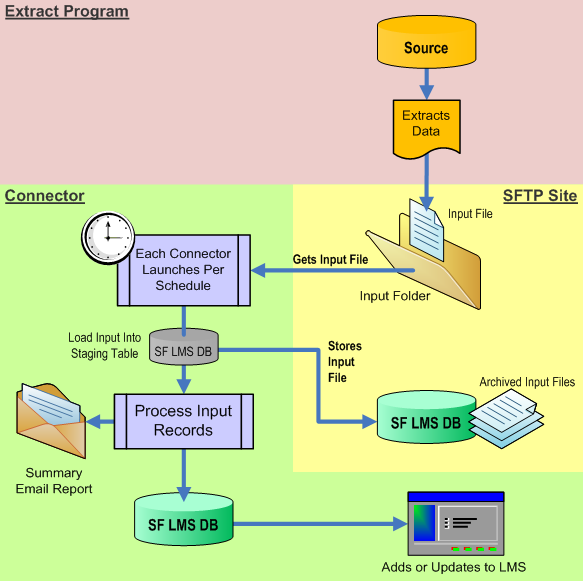 Let’s look at some connectors and what to watch out for in them.

A Domain is an important concept in LMS which decides the ownership of data objects like items, scheduled offerings, curricula etc. Using domains, we can restrict administrators to edit only data objects that are under their control. This is largely useful for multiple country rollouts where each country can become a domain in the system.

Users should also belong to a domain and is a mandatory field on the user record. Now how do we assign users to the appropriate domain? In an implementation where there is a single domain, for example in a single country/company implementation, this can be taken care of in the connector configuration file where you can define a default domain.

In 2 of my LMS projects I had to deal with multiple domains in an integrated implementation. During the configuration workshops the design question “Which field from the BizX system should be used to determine the LMS Domain?” was missed and we had to go back to the client much to their dislike. One client agreed to use the standard DIVISION field while for another we had to use a custom field to map this field.

In a BizX integrated LMS implementation and having multiple domains, consultants need to determine the Domain field mapping to the fields in BizX during the workshops. We could use the standard fields or the 15 custom fields to do this. If this mapping is not done, the only option is to manually change each user record in LMS after the user data is uploaded. For single domain clients, this is not an issue as we can use the default mapping defined in the connector configuration file.

In the next part I will discuss a few other connectors.

thanks for a great article. Could you please explain more in detail how to set specific Domain and user Role via SF-USER connector? Currently all users uploaded via SF user connector has PUBLIC domain and default LMS user role. I would like to set one of my created domains and my own user role. I tried to set it in connector settings, but with no luck.

Well, you cannot default differently for each user. For this, make sure you have the Domain value populated in your UDF in one of the custom columns. Then map this column in the default domain connector setting