Throughout the last months I have had many conversations with customers on how to manage the journey to S/4HANA. The point of departure is always different: large vs. small organizations, private vs. public sector, new vs. experienced SAP customers …

Despite of the different contexts, the questions & challenges are rather similar. And this reminded me of something. When my wife and myself traveled with our kids around the world, we relied a lot on Lonely Planets to prepare for the different countries. The questions had been always the same:

So why not writing a travel blog for S/4HANA land and share insights in an easy-to-understand way for anyone, who likes to go there?

Why should you go S/4HANA land?

A question I rarely hear. Most of the SAP-customers I talk to already decided on that one, but the ones I did not meet so far, might find that question interesting. So let’s go for it.

Often I hear the argument of ‘2025’. A poor one! By end of 2025 SAP ERP 6 will face end of general maintenance (details). So you might think ‘So what? we have 2017. Even a large migration project would not need to be started now.’ Fully agree!

For me travelling to S/4HANA is motivated differently, at least today.

Often the motivation to go for S/4 comes from functional requirements.

To cut long stories short: S/4HANA simplifies and integrates consequently the different system domains much better. This results in easier reporting and an incredible speed despite huge amounts of data.

This argument usually does not come right away and is not initial motivation to go towards S/4HANA. However after some discussions, customers add this aspect themselves:

“What happens to my current projects?
Maybe I’m now developing functionality which exists in S/4HANA?
Maybe my development will not work anymore?
Maybe I use outdated implementation techniques?
Will ongoing developments or chosen AddOns add challenges to a conversion from SAP ERP to S/4HANA?
Do I need to retrain people for S/4HANA, which I plan to train in the next months on SAP ERP.”

All valid questions and the answer is a roadmap plan for the landscape and impact analysis of the ongoing/planned projects. A lot of customers do not have either one, because it was also not really needed in stable environments. But this has changed! Not (only) due to S/4HANA, but for all due to the higher change rate of business & technology.

By experience the topic of securing investments by moving to S/4HANA is quickly triggered when approaching mobilizing ERP functionality, comprehensive reporting projects or innovation areas like Internet-of-Things.

Wow, now I hear the interventions from the more experienced S/4HANA travelers:

“Are you serious? Instead of any database and a couple application servers, I need now sophisticated hardware for HANA database and additional FIORI-Server, Web-Dispatcher & Gateway-Server. So what do you mean with simplification?”

Fair point, but if we compare apples with apples, than we face a drastic simplification of the infrastructure.

… just to name some of the potential synergies, which will weight out the light-weight additional system components of S/4HANA. So yes, simplification is an argument!

… or you are gonna die. Sounds polemic, but isn’t! Hardly any discussion in the past months, where the tricky combination of existing interfacing challenges and Internet-of-Things (IoT) use cases have not been thrown on the table. And IoT means more interfacing and potentially additional systems. If then existing business processes are supposed to be used, e.g. invoicing or procurement based on sensor data, you start asking the question:

Why this cannot be all brought together in one digital core?

here S/4HANA is the answer. Just imagine to run now a innovation project on a technical platform from 20 year ago and face the requirement of today’s’ business speed and agility. Soon you will come to a point that the technology of the past, does not allow you to provide the a solution at the pace, which is expected by business.

For SAP Newbies and Re-implementations its of course a no-brainer. Starting with an outdated platform and facing higher implementation efforts than with a state-of-the-art-system does not make any sense, but I have been also through these discussions. If you are wondering about the why … the only reason was that the data center did not feel ready for working with HANA databases since they so much experience with their current technology. As last argument I invited a SAP Basis consultant, who showed in an unforgettable session, that the basis colleagues would have more time for coffee breaks, since some tasks will be not needed anymore.

So this brings us seamlessly to the next question …

When should you go to S/4HANA land?

No straight answer on that one. All depends on the specific situations of the organization. I came across customers of the three groups,

The first travelers (early adopters) have discovered S/4HANA land and are operational already. For some customers the product came to market at the right time, others saw an opportunity to drastically simplify upcoming projects and again others were worried about investing with an upcoming major project in the legacy platform, which would need to be transformed later on. In any case, early adopters are live by now and all travelers are now considered as smart followers.

Smart Followers waited until the functionality is more complete (check here for functionality of additional of 1610) and for all the transition tools are much more enhanced (e.g. Readiness Check 2.0, Data Migration Cockpit and enhanced SUM-DMO, which allows to combine many tasks in one step). The period of the smart followers is also the time of the ‘big wave’, which we can currently see in the rising number of starting S/4HANA projects.

Interestingly, if we look at the share of S/4HANA installations, we see already now a higher percentage of new installations, than conversions. Next to the new SAP customers (many of them SMEs), there are also many customers, who make use of the opportunity to re-implement their current SAP system. In some discussions this turned out to be the better approach, than to convert a grown system, which often does not meet the requirements of today.

When coming to the late adopters I predict that we will face an even higher share of new-implementations, since the elaborated the S/4HANA system will be, the bigger is the gap the current system and the more difficult a conversion will be. As an indication we see growing number of items in the simplification list, which contains the areas of change. Conscious late adopters are mainly in a situation of either having implemented their current system less than 5 years ago (& wanting to leverage this investment first) or waiting for a business-critical functionality which is still on the roadmap.

In any case: Delaying the move to S/4HANA is rarely motivated by the doubt of the product maturity. Most interested customers already considered the first on-premise-version (1511) as ready for their operational use, but latest with the release of the on-premise version 1610, there are no doubts about the readiness.

How can you go to S/4HANA-land?

Here it’s getting a bit complicated, because there is no general answer on that. It all depends from point of departure, how much luggage you have and how much time you want to take to arrive in S/4HANA land.

Generally we differentiate between three ways, while we mentioned already two of them before, namely the new implementation and the conversion. A third option is the landscape transformation, which basically consolidates different existing ERP systems. 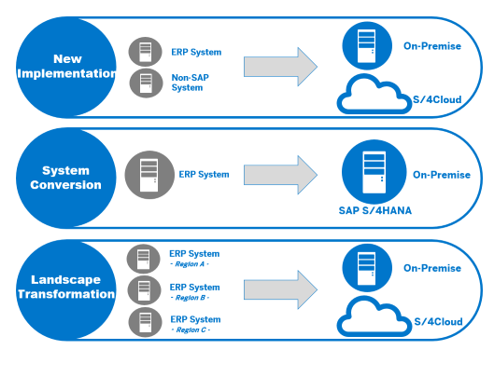 This is a great moment to introduce the different versions of S/4HANA, being on-premise and public cloud version. As you can see in the illustration, the target solution for two transition paths (new implementation and landscape transformation) can be either S/4HANA or S/4HANA cloud.

We will go more in the details in the next section, but let’s first let’s look bit closer in the transitions. If you simply look to the options, you might think that the conversion is he default way to  go S/4HANA land – at least, I would have get for that. But the discussions from the past months and the global S/4HANA project overview shows that reality is different.

The reason for that is not only the higher number of new SAP customers, but for all the decision of existing SAP customers to replace their grown SAP ERP system, mainly for three reasons: 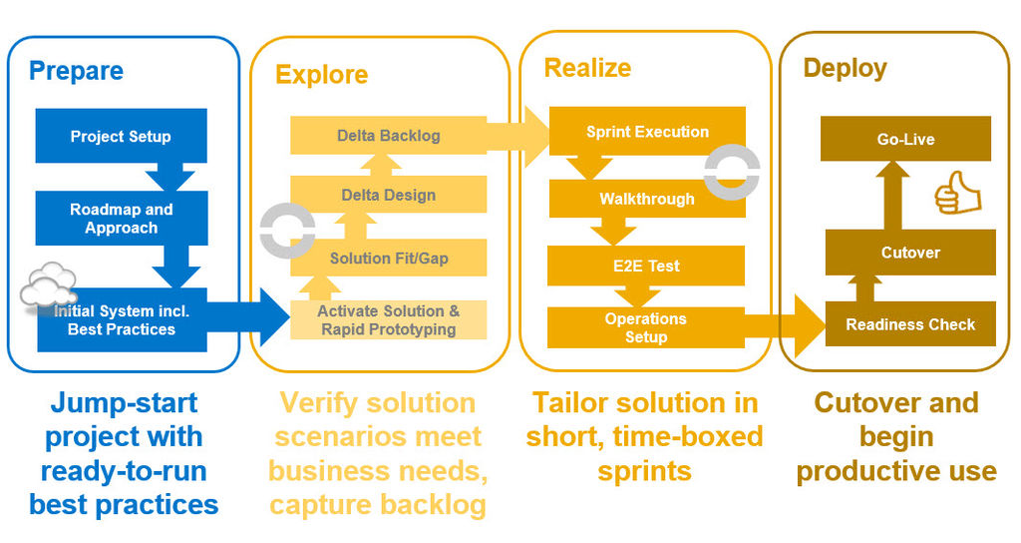 Since SAP Active is key to travel savely to S/4HANA-land I will also dedicate a specific blog post on this. Again, for those among you, who cannot wait, here the link to the one and only place, which contains all the resources: Implementing S/4HANA with SAP Activate

So what are the means to get around in S/4HANA land? Important to understand in this context is the fact that all means base on the same foundation,(code line). The only difference is, that there is

S/4HANA can be deployed in ways

S/4HANA Cloud can be only deployed as

The picture below shows the comparison of the various aspect for the different options.

Just like me, I’m sure you don’t like long blog posts. When I look to the scrolbar becoming smaller and smaller, the alarm bell rings and it gets time to close the travel guide for today.

Feel free to add your comments and questions below. Save travels!

Thank you for the first travelog - waiting for more in the days to come.

We are one of the oldest SAP Customers with plans to move to S/4 Hana but waiting for the innovation in the IS Media which covers the Revenue Stream for our company. As far as we know there is no road map published on HANA in 2018 also.

there is roadmap available for IS-Media in S/4. Check here

To check if the your current IS-Retail solution works I advise to have look at the simplification list. In case you do not find any remarks there you might be able to use it, just like now. I'd advise to run the new Readiness Check 2.0 and it will tell you, if you are fine.

If you are interested in Roadmaps on planned functionality in general please check here. In the pdf you find the link for the features

Thank you for the quick & prompt reply.

I will go through the links & revert back to you.

I had a quick glance through the Road map for Media.

This document does not say any innovations on the IS Media Modules - MAM ( Media Advertisement Management) & MSD ( Media - Sales & Distribution). The document covers only on Content Creation/ Monetization which also needs an integration to Content Management System.

Besides, the document also do not add any innovations to Radio & Television Media Verticals in IS Media.