When Gali Kling Schneider unveiled the roadmap outlining our upcoming plans and priorities for feature development, she also promised monthly updates that would (and I quote) “let you know if we are on track to deliver everything that we announced.”

Well, if I’m to be completely honest, it’s been a little longer than a month. Nearly two, in fact.

While updates have been available (and a variation of this blog has been bouncing around for weeks), we delayed a bit as we fleshed out a slightly different approach to how we convey the roadmap.

As shown in Gali’s post, we were looking at the roadmap in terms of two huge categories: content discovery and community feel. Those categories, in turn, consisted of features (e.g., the development of new functionality) that supported the overarching goals.

This general philosophy and thinking have not changed. But we’ve gotten a bit more detailed in our explanations, to reflect better the overall agile principles driving improvements to the SAP Community platform and experience.

For starters, we’ve shifted toward categories called themes (a term familiar to anyone who has worked in an agile environment) — or, put another way, goals that should provide the most value to the community. A list of themes and their descriptions appeared on the wiki page dedicated to the SAP Community roadmap when Gali published her post, but we have since revised them. The themes now are:

Achieving a theme is contingent upon the delivery of certain functionality — including functional packages known as epics. Looking at the roadmap with fresh eyes, you’ll see that the three-month span of the roadmap now outlines the epics planned — with connections made back to the relevant themes. For example, as the wiki pages for the SAP Community roadmap illustrate, @Mentions — one of the most demanded features — is an epic tied to the “social and reputation” theme.

Speaking of @Mentions, as the roadmap’s update on the wiki shows, @Mentions and the bulk of other epics are moving forward as planned. The following four items have been pushed back, however, for the reasons indicated:

Meanwhile, as shown in recent release notes and on the roadmap wiki page, we have delivered several items as intended — such as the mega menu (i.e., the “header navigation). Other big updates include a new subheader with breadcrumbs and the epic of a consistent Actions menu across the community — with standard links for all users. These links are: Ask a Question, Write a Blog Post, Send a Message, Manage My Blog Posts, and Get Started.

Please note that users within the Coffee Corner will also see Start a Discussion as an Actions link — and this is the only area of the site where this choice will be available. Also, SAP Community moderators and administrators — once logged in — will see additional links in the Actions menu, based on where they are in the community (e.g. Questions & Answers, Blogs). Some moderation entries will come this month.

While we’re on the subject of moderation: Profiles for moderators will now show which tags they moderate. Note that some moderators — such as yours truly — aren’t assigned to any specific tags, and, instead, just try to help with the overall moderation queue. My colleague, Moshe Naveh, on the other hand… 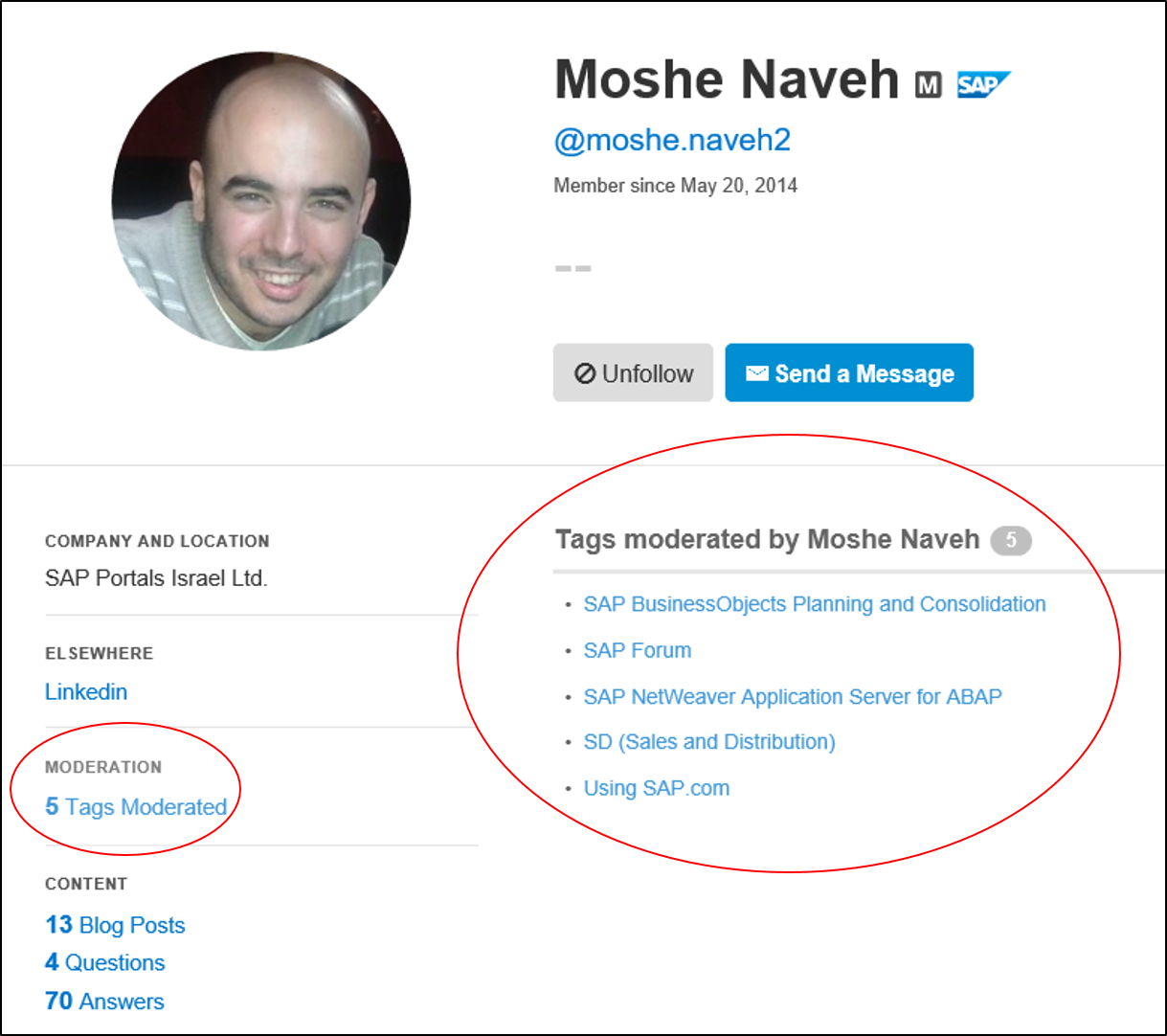 That’s it for now. We’ll be back in a couple weeks with new release highlights and in a month with another roadmap report. You can catch up on previous highlights via the Community Updates page.