This post is inspired by a talk by Tudor Girba at the the SAP Inside Track Munich 2015 “Solving real problems without reading code”. Thanks for all community members for their work and a special thank to Damir Majer for inviting Tudor Girba.

The first technique is to draw models while coding. I did this quite often. But it is time consuming. After some time the drawing becomes incorrect and has to be corrected. This added to the cognitive stress that was already present due to my work on the coding. So I did this sometimes, but not very often. And when I did it, I often questioned whether it was worth the effort.

Drawing UML diagrams became easier after I learned from plantUML. Diagrams in plantUML are made from texts, these texts are easier to make and change. This saved a lot of time. But when I worked with real code I needed very often informations about the usage of attributes and methods by other methods. This is not possible with UML class diagrams. So I mapped Methods to classes, and classes to packages; that worked somehow, but not very well.

There are tools to extract model informations from an SAP system. The UML class diagram is in newer releases now working very well. But it may require a correct setup of the SAPGui. For this there exists projects to extract UML class diagrams to PlantUML Diagrams. A lot of work was done here by Jacques Nomssi. See also the posts for a technique to extract Sequence diagrams from ABAP traces.

In October 2015 I heard the talk by Tudor Girba and learned about Moose analysis and the FAMIX meta-model. FAMIX is more granular than the UML class diagrams and contains invocations of methods and accesses to attributes. I wrote an extractor from SAP to Moose and was able to generate diagrams in Moose. See for instance this force attraction diagram: Elements can be dragged an inspected. It is not only a picture. So it is possible to use such diagrams in projects. Links between loosely coupled applications are easy to see. As well as “islands”, classes that appear to have no connections to their surroundings.

But the main problems I had with other techniques that extract meta-models from the system stayed the same:

So I developed a second tool to address this problem. It is developed in Smalltalk and works on top of Roassal, the visualization framework that is used by Moose. It is hosted on Smalltalkhub. See Moose-Diagram for the github project page. The link to the smalltalkhub application is contained here.

Alexandre Bergel helped me to make Smalltalk code that made Roassal diagrams that looked a bit like UML class diagrams. But the red boxes are methods, the blue attributes, the gray classes and the rectangles packages.

I currently use the tool mostly for SAP applications. The extractor SAP2Moose interprets methods and attributes in a more general way

This interpretation has advantages in my opinion, but it is currently as far as I know only supported by the SAP2Moose extactor.

For a medium sized applications this made diagrams like this (here a logic to color connected elements was used to highlight some points):

The elements can be dragged and inspected, but in such a big model that is not easy. Here is a smaller application where the elements where ordered in a logical structure and some of the package boxes are suppressed: This is easier to handle. Some lines are not nice and some boxes overlap. But this is not a big problem, because this is a diagram in Pharo. All elements can be dragged and inspected. So even if it looks not always nice, it appears not to be a problem. It is possible to display only subsets of the elements. For this certain elements are marked and the following statement is given: Suppress all other elements except me and elements that are either used by me to the n’th layer or that I am using to the m’th layer. By doing this for multiple elements a subset of an application is displayed in something I call currently layout. This appears to be very practical. It is possible to add comments. The positions and other settings are then stored to a file. This gives diagrams like this: This resembles one of the mental models the developer had in the above mentioned comic Why you shouldn’t interrupt a programmer. And at least for me it works. This diagrams are comparable easy to make (Typically 2 minutes). Most elements are displayed in the diagram because they are connected to specified elements. If the coding is changed and the diagram is generated again, changes are automatically visible in the diagram. Deleted elements vanish, new elements appear if they are to be displayed by the above mentioned rule. And comments remain as long as no renaming was done. So when my real mental model collapsed, this diagrams remain and help me to reconstruct the real and often more complex mental mode.

This models are not perfect. Some elements are not extracted, sometimes there are bugs. It is just a model.

But it is for me so good, that I use it near to every day in my work.

first of all it´s awesome to see how you´re pushing this topic!

My opinion is that we as an industry have to understand the costs of producing Code and especially the costs of Code that has the label 'Legacy Code' is enormous.
Often I hear "we will exchange our suboptimal solution easily when it´s necessary", but this is quite harder then the people expects to be.

We need solutions to identify on a higher architecture level what is problematic. This will help us to show the problem state and what is more important to start communicating about such topics.

and I agree totally about this point, we need different views (live-views) that show us the current Code situation and no power-point wishful views on systems.

Rainer, please keep moving forward! Your work is so important and valuable...

thanks for your motivation. I started recently a discussion on how to improve the Smalltalk part of the application. Maybe by improving the user interface and by a better integration in Moose and FAMIX.

I understand that some people are interested to integrate it in Eclipse, I will support such a project, but I doubt that I have the time to do this.

I really like the project and got it quite a few month on my map that I want to support you.

I would really love to see it as an addon for Eclipse and have it available on the fly. I love the tool to visualize the CDS-Views and see how everything fits together. That makes a documentation much more interesting to reread and of course it shows gaps and mistakes very easy on a level you can also talk with the business-people.

I am currently discussing with the Moose people on how to improve the tool in the Smalltalk environment where Moose is currently implemented. The main reason is, that I have no experience in developing addons for Eclipse. And I assume that Smalltalk allows me to make it with less efforts compared to other frameworks.

But I will be happy to support and collaborate if you or someone else plans to make an implementation in Eclipse.

I never stopped thinking about your proposal to make an Eclipse addon. I just created a new repository Moose2ModelEclipse in the Moose2Model organization for this. The main intention is currently to estimate and prototype.

PS: I visited the SAP Press people at SAP TechED Barcelona, saw the book "ABAP Development in Eclipse" and bought it, hoping that there is a chapter about enhancing the ABAP development tools in Eclipse. I opened the book at the airport, to find out, it is the case! Thank you Daniel Schön for writing this chapter. 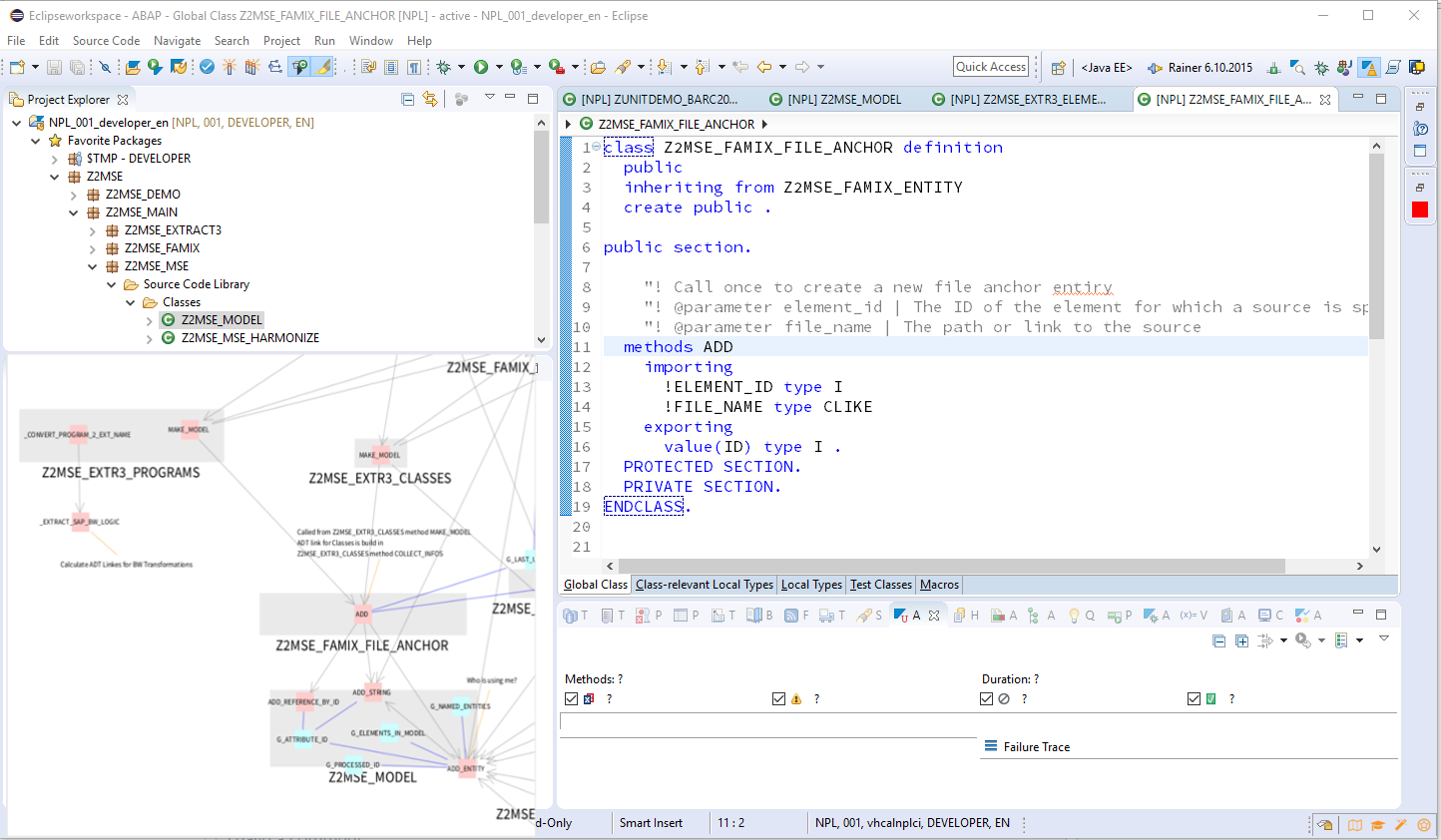