This blog is part of the Lumira 2.0 launch blog series.

We’ve talked a lot in this blog series about the benefits of using SAP Lumira 2.0, but what are the specific deployment patterns to maximize business value?

Lets go through the patterns from simplest to most involved:

In a Lumira 2.0 discovery only deployment, only the Lumira discovery tool is deployed to the desktop. Business analysts and casual users use this to:

The license that enables this deployment pattern is SAP Lumira, desktop edition. In this deployment model, only Lumira designer is used to create sophisticated enterprise dashboards and analytic applications.

The workflow starts on the desktop with the SAP Lumira designer component where the dashboard developer starts by creating a template either from scratch, or by using one of the existing predefined templates.

The Lumira designer component is based on the Eclipse framework and is a developer-centric tool. We have customers that deploy this tool to power users that sit in the line of business, but they are typically well supported with predefined templates created by IT, and additional training.

I like to explain the designer component as similar to good old Microsoft Visual Basic. You drag and drop some visual components to the canvas, and wire them up using a scripting language, which in this case is a subset of Javascript instead of Basic.

Because this is a developer centric tool, it has more of a learning curve than SAP Lumira discovery. And that’s ok, because they are both based on the same common runtime engine, file format, and data access stack, and both are designed to work together.

Once users create the LUMX file using the designer component, it is published to the SAP BusinessObjects BI Platform where it can be secured and shared with large user populations.

All subsequent modification of the LUMX file must happen using the desktop software.

There are many licenses that enable this deployment pattern, but they would all include SAP BusinessObjects Dashboards or Xcelsius Enterprise. 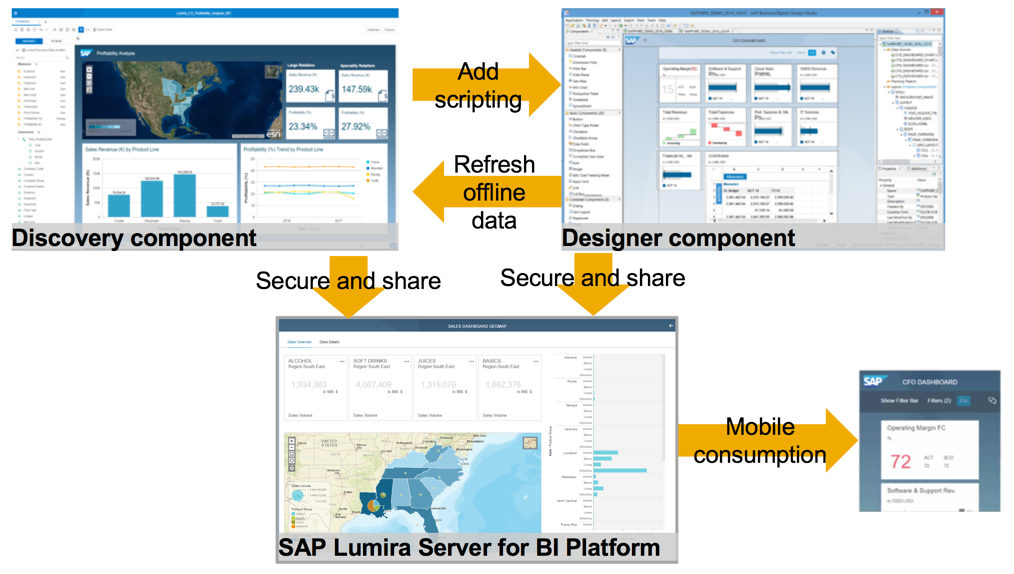 In this deployment pattern, the full power of SAP Lumira is realized.

By combining the user friendliness of the discovery component with the scripting power of the designer component, customers can accelerate their dashboard projects. Business users rapidly prototype the look and feel of the dashboard first in the Lumira discovery component, and then IT or power users open those LUMX files in the designer component to add more interactivity via scripting.

Also, IT can endorse the usage of the discovery desktop client to enable more agility among the business user community.

LUMX files can be published to the SAP BusinessObjects BI Platform for governance and sharing from either the discovery or designer component.

Data mashups are supported via the discovery component, which can then be leveraged in the designer component.  After making modifications to the LUMX file in designer, that same file can be re-opened in discovery to refresh the offline data..

Legacy BusinessObjects Enterprise Premium licenses purchased prior to 2012 do NOT include this functionality.

What to do next

In the next months, you’ll be hearing many more details on SAP Lumira. I’ve personally briefed many many customers and user groups on the solution, and the interest has been nothing short of inspiring! While you eagerly wait for more details, here are a few key activities you can start to get ready.

Blair, sorry to go off topic but wondering if you may be able to answer a different question relating to SAP Kernel? I've been reading through a lot of your blogs which you seem to be very knowledgeable about SAP products and licenses. Need help understanding "SAP Kernel License". Based on reading through different Blogs and SAP web pages, am I wrong in that SAP Kernel is more or less a part of different SAP Applications? I see that it's part of SAP MaxDB so I was assuming it comes with other SAP apps as well. I also see that it's upgraded based on code provide by down loads which makes me think that once you have it loaded you can upgrade just the Kernal without purchasing additional license.. I'm really guessing at this so if you can help explain this in a simple manner would greatly be appreciated. Sorry to cut into this Blog with a different item...

I don't know anything about that product or the licensing.

In my organization we are using SAP Dashboard. I would like to ask you an important thing in order to understand if Lumira is the best dashboard product to move on, after the predicted EOF of Flash; and as a consequence SAP Dashboard is going to be no more opportune.

The main reason to use SAP Dashboard is the satisfaction of the following requirement:

I don't understand if the same thing can be done with Lumira, in particular the possibility to export a dashboard in Power Point format: once exported it must not be static but dynamic at the same way of SAP Dashboard.

Could you please give me a feedback?