The goal of time series modeling is to find the internal structure within a sequence of data points in time order. When that structure is known, the temporal measurement can be extrapolated in the forecast horizon. To build a time series model, SAP Predictive Analytics decomposes the signal (observed series) into additive components, as follows:

The tool evaluates automatically various combinations of trends, cycles and fluctuations. Eventually it selects the combination that gives the best forecast accuracy. The overall process is represented in the following diagram: After a model has been generated, the winning components are displayed in the debrief:

This model works with monthly ozone rates data. It detected a linear trend and an auto-regressive component of 37 months. No cycles were found. The user can view the signal (the green line on the chart) and the trend component (the blue line), as follows:

He can also display the detrended signal (in green below) and the auto-regressive component (in blue):

As part of the modeling process, the tool derives attributes automatically from the date-time field.

In the following model, built against a sub-hourly dataset, a cycle was detected that uses the minuteOfHour derived attribute:

Let’s look at another example with a monthly series. The following model didn’t find a trend pattern per say but applied a lag 1 transformation to the data. It detected a cycle that uses the monthOfYear derived attribute, and an auto-regressive component of 44 points:

A time series model can detect multiple cycles. The following model captured two cycles based on the dayOfWeek and the dayOfYear derived attributes:

In the diagram given at the beginning, you may have noticed the term, “extra-predictable”. What does that mean? The term refers to variables that the user can provide to improve the accuracy of the forecast. They are in fact candidate predictors that come in addition to the date-time field and its derived attributes. In the case of a daily series the user may be able to get data from external sources in order to build columns such as: Is National Holiday (Yes/No), Is School Holiday (Yes/No), Is Sporting Event (Yes/No), Weather Temperature, and Weather Rain. Or else, the user can perform calendar-based feature engineering.

Let’s look at an example where we prepared extra predictors on a daily series. Seven columns, one per weekday, were added. Each column is a continuous type and contains the number of days in the month regarding a given weekday. The debrief of the model shows a cycle based on the total days in the month for weekday 2, as follows:

The following is a data preview of the features built on the time dimension table:

The model debrief says that the feature Rank Day Of Week 1 allowed the detection of a cycle pattern in the data, as follows:

Note also that the data for the candidate predictors must be provided both for the past and future periods of the time series. So, for example, if you want to feed the model with weather information, it must include the weather forecast data.

In the model debrief, the user sees a global indicator that tells how well the model performs. This is called the Horizon Wide MAPE:

The statistical reports menu gives the details behind this performance indicator. In the example below that has a forecast horizon of 6 periods, we see 6 MAPE values calculated on the Validation dataset. The Horizon Wide MAPE is simply the average of these MAPE values.

The menu “Other Performance Indicators” shows metrics like MAE that is appropriate when the series has zero values.

Note that a third partition can be added; in that case the split becomes: 60% for Estimation, 20% for Validation and 20% for Test.

The SAP HANA Automated Predictive Library (APL) allows a data scientist or a SQL developer to invoke the automated time series modeling engine directly from a SQL script. This section illustrates how, within HANA Studio, a data scientist can use the Forecast function of APL.

To begin, we look at the data in a line chart, a 14-year history of monthly milk production: 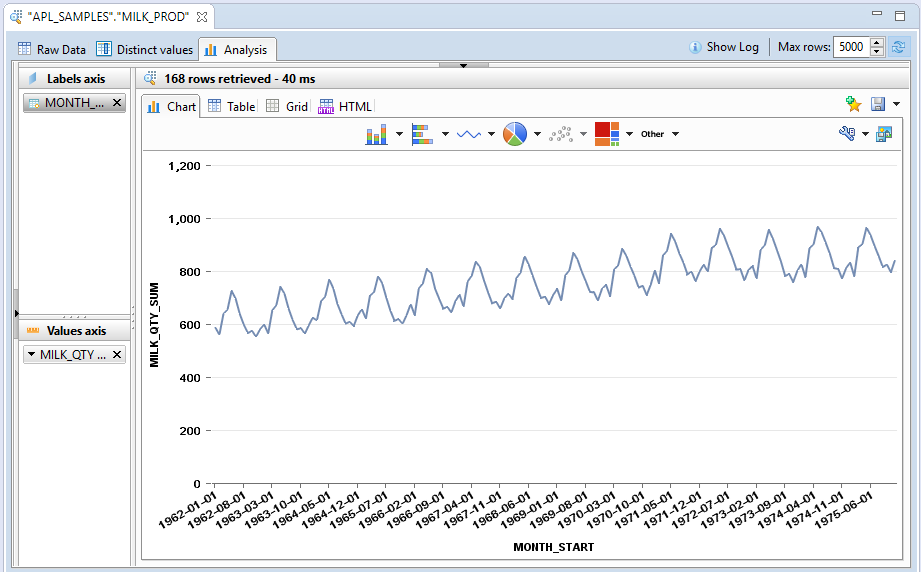 We generate multiple lagged series from the original series to see if there is auto-correlation in the data:

We check for patterns visually at different lags, using a lag plot. In the screen below we selected the lag 12. There is clearly a pattern. 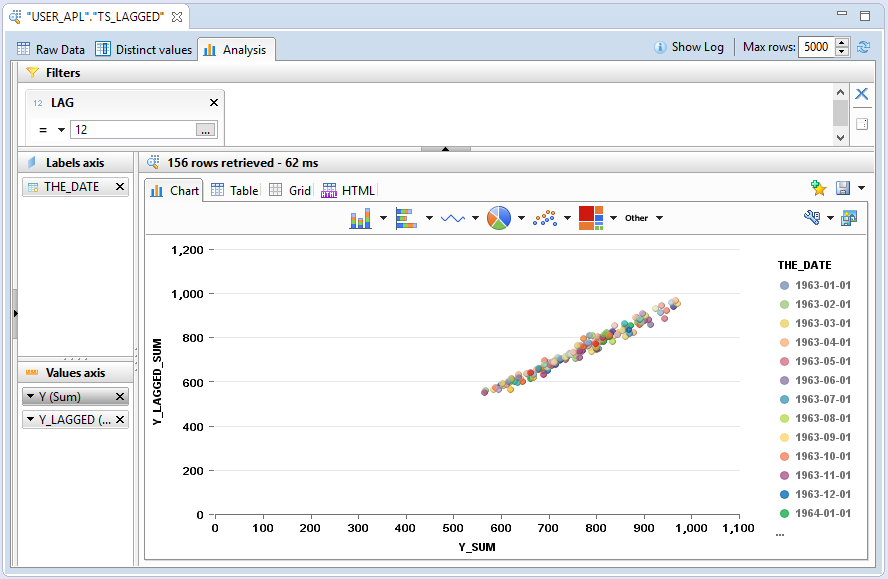 We compute the correlation coefficient, for each lag, to get a summary view. 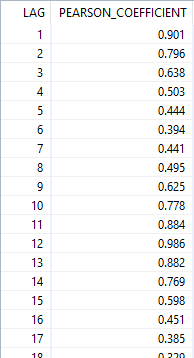 Now that we are more familiar with the dataset, we move to time series modeling.

We create a SQL view where we transform the monthly quantity into an average quantity per day to remove the variation due to the fact that months don’t have the same number of days, and sort the series over time, as follows:

We create the table type that describes the structure of the forecast output:

We create the requested tables for the function to work, and ask for a 12-month forecast horizon:

We call the APL Forecast function:

We query the output tables to obtain a debrief of the trained model: 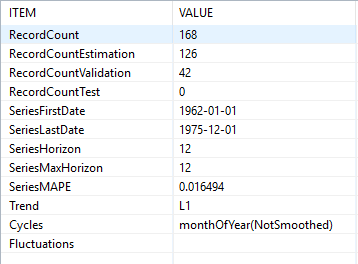 To assess if the model did a good job at capturing all the patterns in the time series data, we will run a few tests on the residuals.

First, we compute the mean of the residuals series, with the expected value being zero:

Then we generate multiple lagged series from the residuals series:

And we compute the correlation coefficient, for each lag, with the same SQL we used earlier: 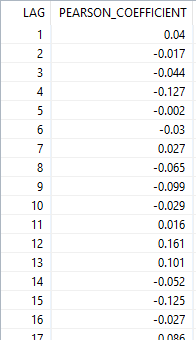 It seems there is no auto-correlation left in the residuals.

Finally, we check that the residuals look like white noise, as expected in case of a good forecasting model. For that, we will use the HANA PAL function: White Noise Test. This PAL function performs a Ljung-Box test. If the series is white noise, the test returns a value of 1. If not, a value of 0 is returned.

We must put the residuals data in the format requested by the PAL function:

We call the PAL function:

We display the result of the test: 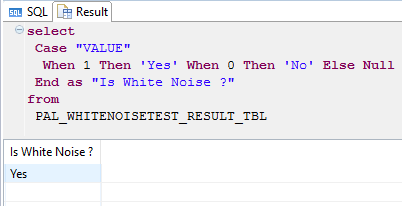 To use this PAL function, don’t forget to create first the required table types and its stored procedure, as we did with the following script:

We are finished with our residual analysis tests. We know we have a good forecasting model. Let’s produce the forecasted values.

We transform the forecasted average quantity per day into a monthly quantity:

We show below the results of this query; the last 12 rows, corresponding to the 12-month forecast, were automatically generated by APL: 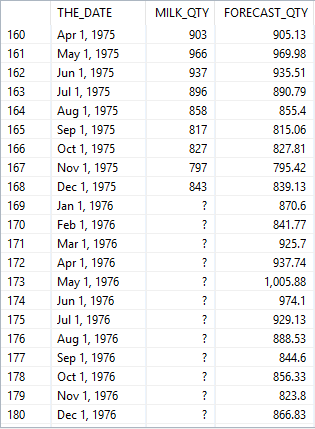 Really interesting content! Thanks for taking the time to write this down!

This is very helpful. Great content and well explained!

This is an incredible helpful summary of the functions of automated time series!

As I am working on my bachelor thesis (an analysis with SAP PA) I wanted to ask if there is even more in-depth content, like the specific formulas that are used in the season detection and an explanation to those formulas.