Unlocking the Potential of ASEAN´s Youth

The project took a full year to prepare. “It was a lot of work, but worth every minute,” said Eugene Ho, Head of Corporate Affairs for SAP Southeast Asia.

On May 9, SAP and the ASEAN Foundation announced a strategic partnership in Jakarta, Indonesia. By signing the Memorandum of Understanding, the two organizations officially agreed to roll out three initiatives during the year of ASEAN´s 50th anniversary. “Our goal is to prepare youths in the ten ASEAN countries for digitalization, equip them with the skills they need to meet the United Nations Sustainable Development Goals and thrive in the Digital Economy. To achieve this, a partnership between the public, private and plural sectors is key. This is also in line with the United Nations’ Sustainable Development Goal No. 17 of revitalizing global partnerships for sustainable development,” said Ho. 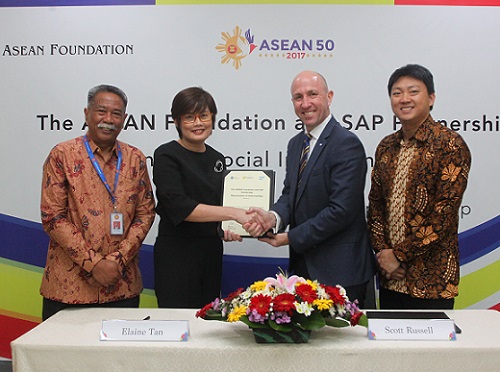 Flashback: During the height of the Cold War in August 1967, Indonesia, Malaysia, Philippines, Thailand and Singapore founded the Association of Southeast Asian Nations (ASEAN). Its prime objectives included facilitating economic and political collaboration among its members and accelerating economic growth and social progress.

Collaboration was an ambitious project since Singapore had declared independence from Malaysia just two years before, insurgency was brewing on the Thai-Malaysia border, and the Vietnam War was gaining momentum. Fortunately, the alliance didn´t collapse and five more states joined ASEAN: Brunei (1984), Vietnam (1995), Myanmar (1996), Laos (1997) and Cambodia (1999).

With a combined GDP of US$2.5 trillion ASEAN – if it were a single country – would be the seventh-largest economy in the world. Today the combined GDP of the European Union is about six times larger, but experts expect ASEAN could overtake the EU within a generation provided economic growth will continue. For instance, from 2007 to 2015 ASEAN’s growth rate averaged 5.3%.

Build a cohesive and prosperous community

However: “ASEAN represents not just an economic community; it also represents one social community,” said Scott Russell, President and Managing Director, SAP Southeast Asia. This is among the reasons that ASEAN leaders established the ASEAN Foundation in 1997. The Foundation is an organization from and for the people of ASEAN. It promotes awareness, identity, interaction, and people development. Its vision is to build a cohesive and prosperous ASEAN community.

One of ASEAN’s key agenda is youth empowerment – which has been a salient topic for the Association since the Declaration of Principles to Strengthen ASEAN Collaboration on Youth that was presented in Bangkok in 1983. By 2020 almost half of the region´s population will be under 30 years of age. “There is a growing pool of talent that we can invest in and work for a better future,” said Russell. “Through our joint initiatives with ASEAN Foundation, we aim to prepare young people for the digital economy and help ASEAN drive sustainable socio-economic growth,” Russell adds.

Back to Eugene Ho. At the beginning of last year, he asked himself: “Who could partner with SAP to improve people´s lives across the Southeast Asia region and scale its Corporate Social Responsibility efforts?” After identifying and approaching the ASEAN Foundation, Ho invited Elaine Tan, the Executive Director of the ASEAN Foundation, and other Foundation members to visit SAP’s office in Singapore, to learn about SAP’s CSR and University Alliances efforts, and experience a technology showcase. Ho and his SAP colleagues were then able to convince them of the benefits from a long-term collaboration.

Elaine Tan quickly became a strong advocate of the partnership, stating: “I believe that our joint initiatives with SAP will increase the involvement of ASEAN´s youths in national and regional activities and give them an opportunity to actively contribute to the ASEAN community.”

Additionally, as a company, SAP acknowledges the role that millennials play as next-generation leaders and changemakers, with millennials making up more than half (59%) of its workforce within Asia Pacific and Japan (APJ). “We want to encourage ASEAN youths to step up to the challenge and be involved in driving sustainable future for their communities. And youth activism can be achieved when young people are included in the equation of this partnership,” continued Ho. 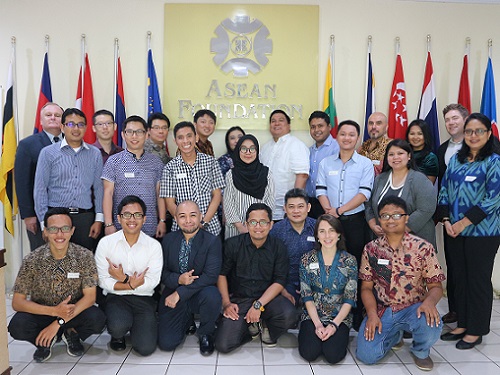 SAP and ASEAN Foundation agreed to roll out three initiatives in 2017 to address ASEAN´s economic, environmental and societal issues. The projects are based on three focus areas of education, volunteerism and entrepreneurship (see box).

It goes without saying that SAP would like young talent to draw attention to this partnership. “More than 12,000 students in Southeast Asia are going through an SAP curriculum every year, said Eugene. “With the ADSE competition we are giving these students a voice and putting the topic of analytics on the agenda. We are also helping governments motivate youths to become engaged in ASEAN.”

Eugene Ho is fully aware that SAP has entered uncharted territory with this partnership. “Our initiatives can serve as a blueprint for a sustainable collaboration with the ASEAN Foundation and other organizations. And they will demonstrate how to convince youths to become actively involved in ASEAN and its digital future. And this would be worth every effort.”

The three pillars of collaboration

Students can find out more about the competition and register online via the ASEAN DSE’s official website: www.aseandse.org. The registration portal is open until 31 July 2017.

In collaboration with the United Nations Volunteers (UNV) program and the German Federal Ministry for Economic Cooperation and Development, ASEAN Secretariat, ASEAN Foundation and SAP along with other partners have launched the Youth Volunteering Innovation Challenge (YVIC) in ASEAN. Under the theme “Impact ASEAN,” the initiative supports young volunteers throughout the ASEAN countries in their journey to catalyze youth-led innovation for social impact and sustainable development. YVIC will provide entrepreneurship knowledge and skills through national workshops. The national workshop winners will be awarded micro-grants to prototype their ideas and later participate in the regional mentorship orientation in Bangkok, Thailand. In addition, employees from SAP will be volunteering their time to provide guidance and support to refine and scale up the youth’s Impact Projects.

Through the Social Sabbatical program SAP employees will support social impact intermediaries through mentoring and pro-bono consulting. The program in association with several partners will impact close to 20 social enterprises across Cambodia, Indonesia, Lao PDR, Malaysia, Myanmar, Singapore, Thailand, and Vietnam in 2017.

If you have friends or relatives who are ASEAN nationals above 16 years old and studying at a tertiary institution in Southeast Asia, please encourage them to check out the ASEAN Data Science Explorer competition and take part in it! More details can be found on the website: http://www.aseandse.org/.