This blog will explain below –

Scheduling was required to be done from SAP BW Process chain to keep the daily loads monitoring simple and integrated at one place.

The Steps performed have been explained below –

There is an input parameter which is created on Calmonth. Here, the calmonth value will be passed and then HANA view results will be calculated based on this.

This is read write procedure as can be seen in below script. The read only statement has been removed.

Note – AMDP(Abap managed database procedure) does not support statement such as Commit, rollback. Hence, the same is implemented through a work around.

In the second part, the data is inserted in table1. Table1 is used for logging and tracking the run date of the procedure, time taken by procedure to run.

Later, we are reading the data from HANA view ABC_CV based on the calmonth which will be passed to stored procedure. (This will be shown in Abap class in Step2). The result is inserted in the Table2. Table1 and Table2 are under XYZ schema. 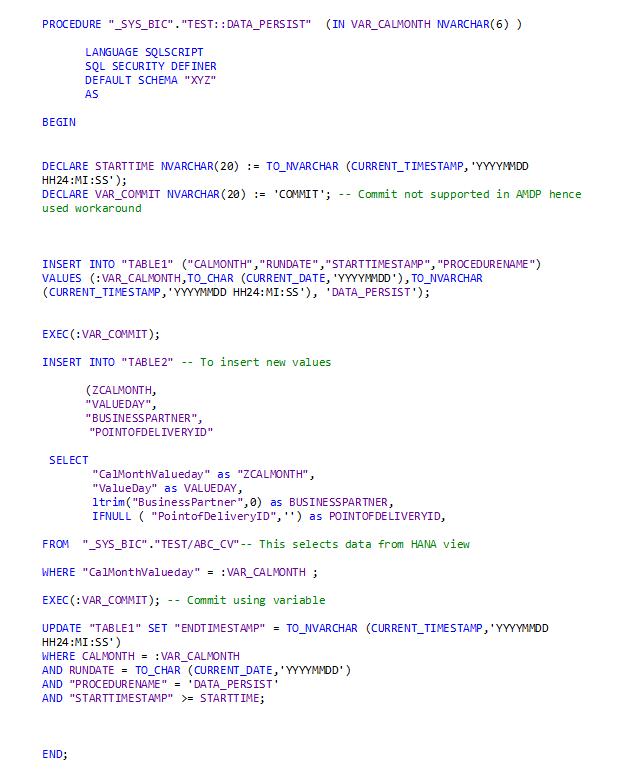 2. In this step, an Abap class is created to call the stored procedure. This has been created in HANA studio through the Abap perspective.

Under the class Method “Datapersist”, cursor C_DATE is declared which holds the last 15 months calmonth. The requirement here is to store only last 15 months data. This data is dropped on daily basis and 15 months data is loaded daily. There is no delta/change recorded mechanism implemented.

Using the For loop, calmonth is passed one by one to the stored procedure. So, using this the stored procedure is called 15 times, by passing calmonth one by one. This is done as the HANA view is very complex and generates very high volume of data. While running, HANA view may consume high memory and CPU so the run is split based on each month instead of running for 15 months at the same time.

Once the data is loaded, another stored procedure, “_SYS_BIC”.”TEST::DATA_MERGE” is called. This is to merge delta of Table2, to move the data from delta storage to the main storage in HANA as recommended by SAP. 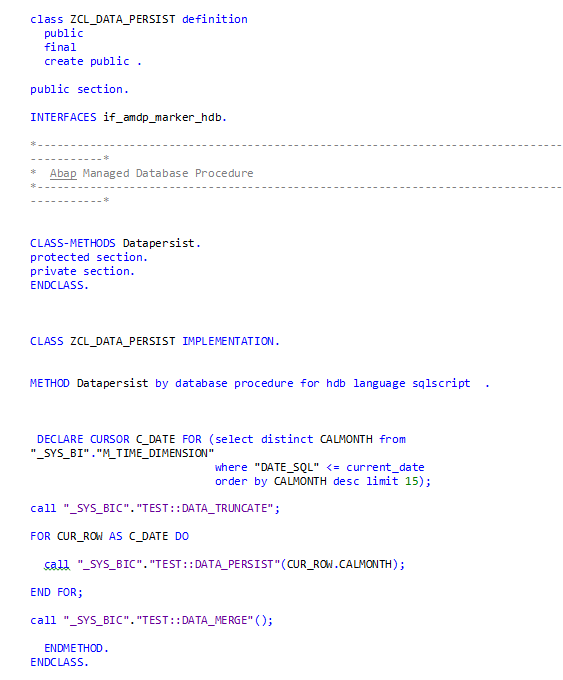 3. An Abap Program Z_Data_daily is developed under BW developer perspective, to call the Abap class/method as shown below. Now this, Abap program can be schedule to run through process chain in SAP BW.