The clients  are native applications and communicate with their backend systems via OData.  The communication and other mobile services are provided by the SAP Cloud Platform mobile services.

The Enterprise App Modeler framework has the following components:

The Mobile Development Kit application architecture is built on NativeScript using open industry standard technologies such as JavaScript, JSON and OData.  The application definitions are represented using metadata which is dynamically interpreted on the client to render the native UI.

Mobile Development Kit utilizes a metadata-driven development model.  With this style of development, developers work at a much higher level of abstraction, and they do not have to worry about low-level system details like onboarding and networking. This allows a wider pool of resources to develop applications. 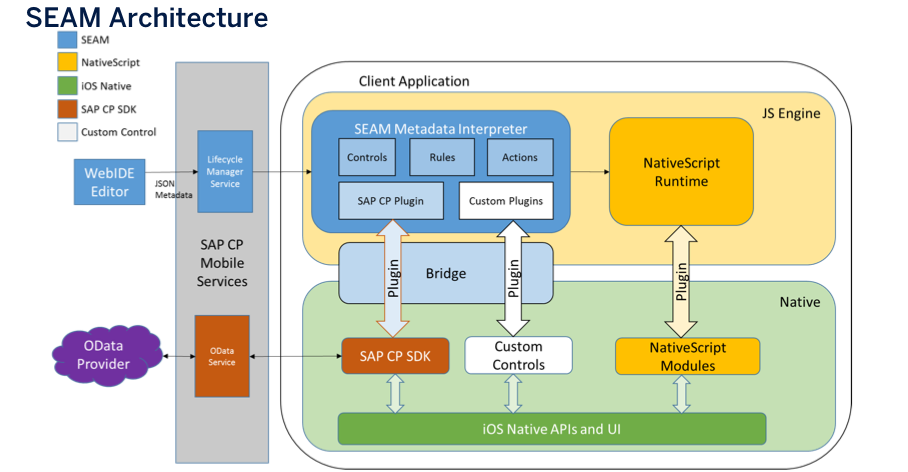 Mobile Development Kit utilizes NativeScript, which is an intermediate transcription/translation technology that can take JavaScript input and render it out as native code.  Running native code on the device provides a huge advantage in terms of power and performance.

Application development is Web based via the Mobile Development Kit editor, a plug-in for Web IDE. The plug-in will be available with standard WebIDE and simply needs to be enabled.  (Due to the name change, the initial release will still have the plug-in labeled as SEAM).

The Mobile Development Kit plugin leverages the templates and wizards available in Web IDE, and adds a page editor, additional wizards, drag and drop UI elements, and app templates used to define the application. Once the application has been enhanced or developed, the definitions are published via an application metadata file that is imported into the App Update component of mobile services (which provides Lifecycle Management for the Metadata).

Mobile Development Kit is extensible to meet specific customer business requirements. Custom controls can be developed in Swift and brought into the Editor for consumption.  A good example is the Map control that was developed for Asset Manager.

The Mobile Development Kit client is a native application that runs on the device.  It provides a metadata framework that takes the business logic, business objects and the user interface and renders it at runtime.  (This runs very efficiently since NativeScript makes this a native experience). The client can run applications either online and offline and can attach pictures from the camera or the device photo library.

The client has 2 layers:

A bridge between the NativeScript layer and the java runtime engine

The first Mobile Development Kit based application released by SAP is SAP Asset Manager on iOS devices. This application utilizes the SAP Cloud Platform SDK for iOS and the Fiori for iOS design language to provide a beautiful Fiori look and feel for iOS.

The interaction between the client and the backend, (i.e. the OData connection, onboarding, authentication, security, application updates, analytics, etc.), are provided and managed via the SAP Cloud Platform mobile services.

Applications are developed using wizards and editors in WebIDE.  This is accomplished with a group of new features that are added to WebIDE via the Mobile Development Kit plug-in:

The application will check for new definitions at launch and the update polling interval can be configured.  If a new version is available, it will download it in the background and notify the user of a pending application update and then force an OData flush action to commit pending local changes.

To learn more, the Mobile Development Kit learning map and other resources are now available!  Please see the below section for details.

Help documentation is now available at:

The first eight video tutorials have been posted!

A Learning Map is available at: Thanks Lisa for providing more detail on this - especially like the architecture diagrams included so as to enable a deeper understanding for Consultants etc in this space. Much Appreciated. Will be staying tuned to the tutorials and demos. THANKS!

Thank you for sharing this interesting information, Lisa.

However, I am confused how SEAM fits with SAP Cloud Platform SDK for iOS, Agentry and the Kapsel and Cordova Plugins for SAP Fiori Client.

Is there a document that explains SAP's mobile strategy and how those to my mind disparate mobile solutions work together?

Many thanks in advance

SEAM sits on top of SAP Cloud Platform SDK for iOS and uses it's API and UI controls to make it easier for developers and technical business users to build new or customize existing applications.

I hope this helps.  Please let us know if you have additional questions about this.  I will look to see if there is a document that further helps clarify.

Thank you for this explanation, Sue.

Do I understand it correctly from Lisa's blog that "The [SEAM] client applications run in native players [...]" and that the currently available SEAM player for iOS "sits on top of SAP Cloud Platform SDK for iOS [...]" as you mention above?

What role do the native players mentioned by Lisa play then?

The native player Lisa mentioned is just a synonym for the SEAM Client, which is a native application that "plays" the metadata.

If it helps, you can think of it as a native-container, similar to Cordova, that contains and plays the metadata. Of course technically it is nothing like Cordova 🙂 but the concepts are similar.

The native player that Lisa mentions is the SEAM client application.  This is a native iOS application that receives the metadata and interpets it to create the UI using the SAP Cloud Platform SDK for iOS controls.

Eagerly waiting for DEMO version to explore on RMAD tool

Visit our product page on the new SAP Help Portal (direct link available on the blog). Leave your comments and let us know how we can help you better!

For any other queries or feedback on user assistance, please contact Jennifer Thompson (jennifer.thompson@sap.com).

Can anyone from the MDK team help updating the overview of SAP MDK's architecture? Maybe Bill Froelich or Jitendra Kansal?

This blog post cannot be updated anymore because the author — unfortunately — no longer works for SAP.