S/4HANA: New report to create production versions with routing during the migration

As I already explained in my previous blog MRP: Simplification on S/4HANA, a new logic called Simplified Sourcing was implemented for the source determination. When we talk about the source of determination for internal procurement, the major change was that the production version is now mandatory for the correct BOM explosion during the MRP run.

Since the release of S/4HANA, SAP provided the report CS_BOM_PRODVER_MIGRATION, which allowed customers to automatically generate the missing production versions during a migration to S/4HANA, or even on a new implementation. The problem was that the report would generate a valid production version for each Bill of Material, but it would not consider the routings. That means, we would a production version created without any reference to the routing, which would cause problems during the MRP lead-time scheduling.

However, a solution for this issue was provided with the following SAP Note:

This note introduces the new report CS_BOM_PRODVER_MIGRATION02, which can generate production versions for all the valid combinations of BOMs and routings in S/4 HANA. The following picture shows the selection screen of the new report. 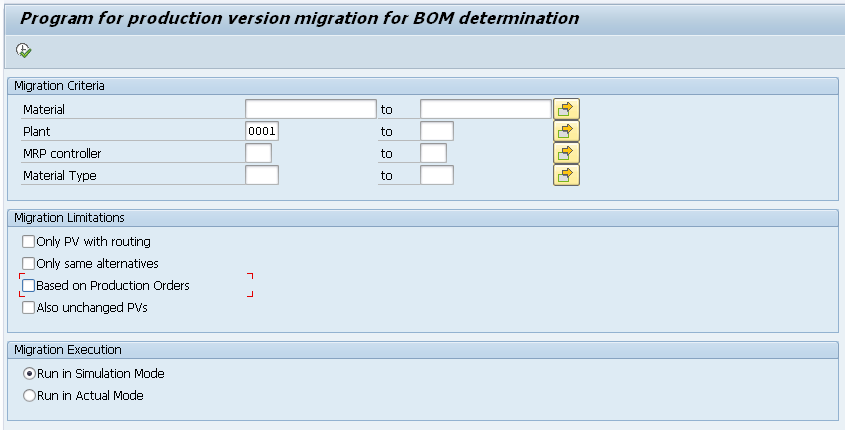 The report provides the following options to limit the number of production versions that will be generated:

1 – Only PV with routing: Production versions will not be generated if there is no routing for a specific material.

2 – Only same alternatives: A production version will be only generated if the BOM alternative matches with the routing group counter.

Just like the previous report, we can select if the report will be executed in simulation mode (without changes to the database) or in actual mode, where the production versions will be generated.

We can now select which production versions will be created by using the Approve or Approve Selected button.

I have read your previous article and also I like you have beautifully explained the concept of Simplified Sourcing for determining the source.

Your blog is very helping for creating production version in mass uploading. I have follow the same procedure which define in your blog.  But I have found a issue with this program than this production created in inconsistency mode and every time I need to go the C223 T.Code and check the consisting Button for every material code. Need your Support regarding this.

This is a standard system behavior. See the following SAP Note:

it is very useful for me.

I found the same issue that when I batch run C223 to consistency check with more than thousans items，the check status set to red light,It seems we cann't run bacth check ,right? any solution？tanks.

It was an informative blog explained nicely. However, I have noticed the following issues while testing,

For discussing issues related to this report, I suggest you to post a separated question, otherwise, the blog comments will become too long.