This blog post is only applicable for the latest version 2 of the SAP Cloud SDK. You can find an updated tutorial for version 3 over at our tutorial page.

The following steps will explain how to create the very first HelloWorld example on SAP Cloud Platform Cloud Foundry using the SAP Cloud SDK. If you want to follow this tutorial, we highly recommend checking out the first part of this blog series.

Note: This post is part of a series. For a complete overview visit the SAP Cloud SDK Overview.

This tutorial will cover your first steps when developing applications for SCP CloudFoundry using the SAP Cloud SDK. More specifically, we will cover the following steps:

The screenshot below shows the final result of this tutorial.

In order to deploy applications to SCP CloudFoundry, you need to create a free trial account. You can create your account by visiting https://cloudplatform.sap.com/try.html

After creating your account and activating it via email, you can log in to your personal cloud cockpit. For your first visit, it should look like this:

After selecting your region, your account will be automatically setup for development with CloudFoundry.

Now that your account is activated and configured, you will need the CloudFoundry command line interface (cf CLI) to deploy and manage your CloudFoundry applications.

To install cf CLI, you can either grab the latest release on the official release page or use your favorite package manager.

In order to deploy applications on SAP CloudFoundry we need to provide cf CLI with an API endpoint. The API endpoint depends on the region you chose for your account:

Now enter the following commands (in this case for the EU region):

The cf CLI will ask you for your mail and your password. After entering these, you should be successfully logged in!

To generate your first project from the Maven archetype, run the following command:

During the generation process, Maven will require additional parameters to form your project:

After providing these values, Maven will generate your project from the archetype. 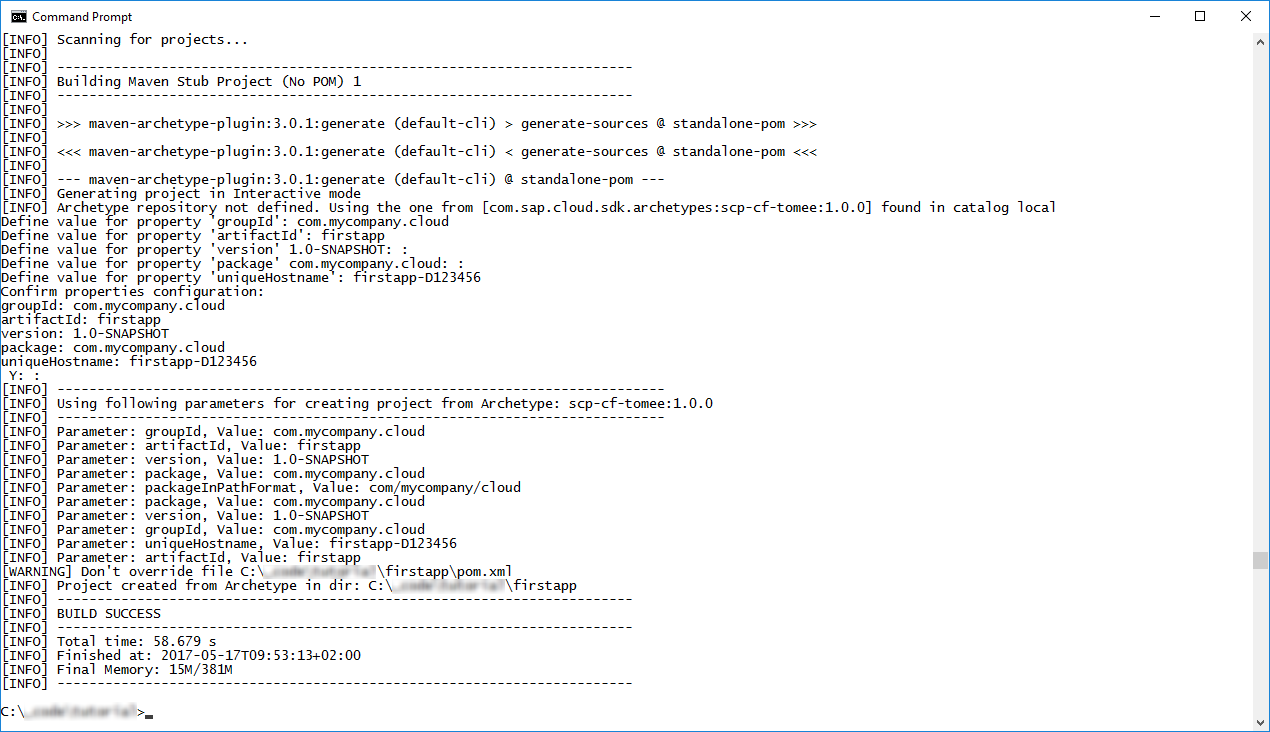 Note: We have created here an application which is based on the TomEE runtime which is Java EE 6 compliant OpenSource runtime that is available in the Cloud Foundry platform if you aim at a Java EE application. You may also initialize the project with SpringBoot (artifactId: scp-cf-spring) or on a pure Tomcat container (artifactId: scp-cf-tomcat). Our tutorial series will be primarily based on the TomEE runtime, we may cover flavors in SpringBoot or Tomcat later in this blog. Nonetheless, the SAP Cloud SDK is compatible with these popular runtimes too.

Understand the project structure and its artifacts

Now you can open your favorite IDE and import the project as ‘Maven Project’. After importing the project into your IDE, the project structure should look like this: 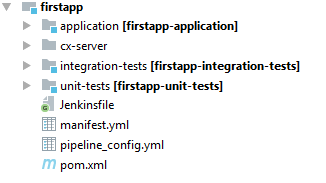 The first thing you will notice, is the different directories:

These are Maven sub-modules and they serve different aspects of your code application, test and deployment environment. The following separation of modules makes it possible to run dedicated unit tests and sensitive integration tests without deploying the application.

The advantage of operating a multiple modules project for your application becomes apparent as soon as the software complexity rises. Then it gets convenient to dedicate code distribution and responsibility to developers for either application or test environment. In terms of reliability and continuance, you will see, that front-end testing and test-automation are as important as classic backend-testing of your project. These fields of expertise require different programming paradigms, and such different kinds of development life cycles. To ensure the overall software stability and liability, a multiple modules setup is the best practice solution.

To get you started, we take a look into the conventional application project, as well as the classic unit tests. Then the integration tests follow, used for code tests with external servers and resources. Once software testing is covered, we briefly introduce the Cx server for continuous integration and delivery.

This separation of test modules makes it possible to just run unit tests and integrations test without deploying, as well as deploying the application without running time consuming tests. Unit tests can either be kept publicly inside the application module, or in the separate unit-tests folder, that’s part of the archetype. For that topic we highly recommend the articles and educational videos from Martin Fowler. For a start we advice reading his post about Unit Tests.

During development it becomes important to test newly implemented code to external services, i.e. logic running in a distributed environment. This is where an integration test is an important tool to ensure correctness and stability over the whole internal and external deployment. Since the integration tests may contain confidential information, like business logic and test access tokens, it can be helpful to maintain its operation inside a dedicated Maven sub module. That way the runnable application itself can be later shipped without tests and their dependency.

Now that you understand the structure of the project, let’s take a closer look at the HelloWorldServlet.

The HelloWorldServlet extends HttpServlet, so this will be a HTTP endpoint that we can visit. We map this endpoint to the /hello route using @WebServlet("/hello"). By overriding the function doGet, we define what happens when a client performs an HTTP GET request on the /hello route. in this case we simply write a response containing “Hello World!”.

In order to deploy the application, we first need to assemble our project into a deployable artifact – a .war file. Open your command line and change into the firstapp directory, the root directory of your project and run the following command:

This tells maven to remove any files from previous assemblies (clean) and to assemble our project (package). The project is setup so that Maven automatically runs our unit and integration tests for us. After running the command there should be a directory target inside of the applicationdirectory, containing a file called firstapp-application.war. This is the file that we will deploy to Cloud Foundry (or locally).

Now the previously mentioned manifest.yml comes into play – it’s the deployment descriptor used by Cloud Foundry. A default version has been generated by the archetype. In order have enough memory available also for later steps of this tutorial series, please make sure to have the instance memory set to 1024 MB. Also the environment variable JBP_CONFIG_SAPJVM_MEMORY_SIZES should be declared as shown below.

The manifest contains a list of applications that will be deployed to Cloud Foundry. In this example we only have one application, firstapp, with the following parameters:

Now you can deploy the application by entering the following command:

cf push is the command used to deploy applications. The -f flag provides cf CLI with the deployment descriptor.

Hint: If you omit the -f flag,  cf CLI will check whether there is a file named manifest.yml in the current directory. If so,  cf CLI will use this file as deployment descriptor. Else, it will fail.

After the deployment is finished, cf CLI’s output should look like this:

Now we can visit the application under its corresponding URL as it is shown in the output above. Take the value from “urls: ...” and append the “/hello” path:

Run the Application on a Local Server

Since version 1.1.1 of the SAP Cloud SDK, the generated projects can also be run locally out-of-the-box. To do so, first assemble the project using the mvn clean package command (see above).

Then, run the following commands to start the local server:

Visit http://localhost:8080/hello on your local machine to view the response of our application. You can stop the server by pressing Ctrl + C.

See the next tutorial in the series here: Step 4 with SAP Cloud SDK: Calling an OData Service.

If you are using Powershell on Windows, always put Maven arguments (supplied with -D) in quotes, for example: 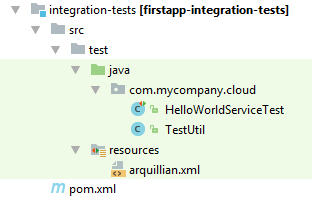