April was autism awareness month. It was also autism acceptance and action month. We in the SAP Autism at Work program feel very proud of playing a role in each one of these three areas, all necessary to promote autism, and neurodiversity in general in the workplace

While there are tons of things to write about autism awareness month, I want to focus on four activities that the SAP Autism at Work program was involved with during the month of April. While these activities varied in attendance and focus, they represent in a very meaningful way what we do, from the world stage at the United Nations to volunteering in a small railroad in rural Pennsylvania that wants to become the most autism-friendly touristic railroad in the United States.

The Autism Advantage  luncheon held at the United Nations after the main United Nations World Autism Awareness day celebration on March 28, reflected a theme that has had significant resonance with the autistic community for some time: the transition from awareness to acceptance of people in the autism spectrum. This acceptance of people with autism touches every aspect of life, from family and friends all the way to education and employment. But for awareness and acceptance to have durable impact, action is necessary.

This event would have not been possible without the vision and energy of Thorkil Sonne from Specialisterne and Jon Herbertsson from the United Nations. The presence of individuals of the stature of Prof. Robert Austin only added value to the event.

During the event I felt a strong connection with many of the participants. During the luncheon we heard from Van Barnefelt, CEO of Sun Pork, an Australian action-minded employer that hires people with autism in the agriculture sector. We also heard that there are more than 50.000 young adults with autism finish high school every year in the US, and I am sure this is not the only country where this happens.  One thing is certain, many of them will join the more than 80% of unemployed people with autism worldwide.

But thanks to action-oriented schools like the Hill Top Academy in Pennsylvania lead by Mr. Tom Needham, young adults with autism will head to college where one day they may cross paths with SAP’s Autism at Work Enterprise Readiness Program, a training program that provides opportunities for University Students with autism to get acquainted with corporate life while creating a pipeline of talent for SAP.

Other participants included Peter Berns, CEO of the Arc, representing our implementation partner, the Arc of Philadelphia, a fabulous organization lead by CEO Laura Princiotta and Executive Director Tanya Regli. The contributions from the Arc of Philadelphia to the SAP Autism at Work program have been innumerable. I also had an opportunity to shake hands with friends from Google, EY, Microsoft, HPE and other like minded companies.

I was happy to be part of this great event that emphasized acceptance, I was happier to have met and heard many like-minded action-oriented individuals and organizations that are making a difference in the lives of people with autism and their families.

in 2016, noticing the many fragmented conversations we were having with more than 100 entities (enterprises, governmental organizations, civil societies, universities, high schools, philanthropists) a group of volunteers at SAP decided to launch in  2.5 months the first (2016) Autism at Work Summit in Newtown Square, PA, a meeting of the minds and hearts of people interested in neurodiversity in the workplace.

This year, through a partnership with Neil Barnett and Jen Guadagno from Microsoft, Michael Fieldhouse from HPE and Hiren Shukla and Lori Golden (not in picture bellow) from EY. The Autism at Work Summit was propelled to new heights by more than 700 attendees including representatives from 50 companies.

The event was kicked off at Stanford University (Day 1) followed by 1.5 days of information exchange, networking and fellowship. During the event, a virtual job fair facilitated by Microsoft attracted more the 425 participants that engaged with recruiting staff from Microsoft, SAP, EY, AT&T, NCR, Ford and JP Morgan Chase. 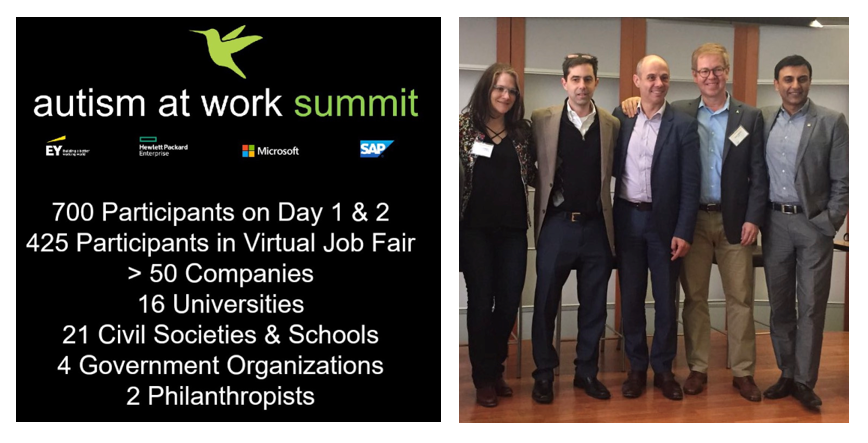 The event was kicked off at Stanford University (Day 1) followed by a day and a half of information exchange, networking and fellowship. During the event, a virtual job fair facilitated by Microsoft attracted more the 425 participants that engaged with recruiting staff from Microsoft, SAP, EY, AT&T, NCR, Ford and JP Morgan Chase. Al companies that today run autism hiring programs.

While we had many conversations with many questions during the event, a recurring question was: “are there jobs that are not for technologists?” . The answer is yes. SAP has hired 120 colleagues with autism into 21 different roles in 9 countries in every board area (division) of our company. These roles span human resources, marketing, finance, software development and customer support to name a few and range from task-oriented jobs supporting business operations to more complex jobs in creative areas like software development. It is important to highlight that not all types of jobs are available in all locations. For example, HR and Finance and Administration support roles have been more prevalent in locations like the Czech Republic and Argentina, while software development and testing jobs have a higher footprint in locations like Walldorf, Germany and Palo Alto, CA.

SAP as well as HPE, Microsoft and EY hire candidates in jobs that add value to the bottom line of our companies every single day. These are not “token”/Charity jobs. As I mentioned during my introduction at Stanford University, companies, no matter what their industry or size, can hire a person with autism that has a passion for doing something into a core function of their company. If you have a bakery I am sure you will find a talented baker in the autism spectrum who won’t disappoint you. If you have flower shop you will find a florist with autism that enjoys that line of work. The world would be a very different place if we were all to hire a person with disabilities into core functions of our companies. It would be rewarding for the individual being hired as well as the company.

One quote resonated with me in a vey profound way, in a way that only author, innovator, business man and motivational speaker in the autism spectrum John Elder Robison, Author, Innovator, Speaker in the Autism spectrum can say it was  “Autism at Work: A Dream Worth Fighting For “,

I am specially grateful to my colleagues Mark Jessen, Raphael Bivas, Nithya Sairaj and Carrie Hall for sharing their inspiring stories. Their blog posts can be found  here:

Also a big thank you to our communications team and our tireless volunteers, fellows and supporters.

3. VOLUNTEERING AT THE COLEBROOK RAILROAD

The Colebrookdale railroad is a non-profit organizations that educates people on the history of railroads in the United States through community involvement and preservation. This small railroad, located in Boyertown, PA (Pop. 4037), has a special meaning for us in the SAP Autism at Work program as it has the objective of being the most autism-friendly railroad in the U.S.

So, on April the 15th, armed with brushes and stain, about 15 volunteers participated in a day of wood staining a railway platform.

John Elder Robison, keynote speaker at the 2017 Autism at Work Summit invited the community of people with autism and those supporting them to promote and support leaders in the Autism spectrum. He shared that civil organizations have their own community leaders, so do religious and civil rights organizations. He then asked why “individuals in the autism spectrum like me” cannot become leaders in industry and society at large?

We at SAP believe in the formation of leaders, including leaders in the Autism Spectrum. On April 19, we held the SAP Autism at Work Awareness and Acceptance Day in Newtown Square, PA, where young colleagues in the autism spectrum shared their stories and perspectives and shared advise with employees whose families are touched by autism (like my own family).

if you do not see leadership in those colleagues standing up with a microphone, sharing their experience with the world for the benefit of others, I do not know what leadership is. It takes a lot of guts to get out of your comfort zone and speak in public. It takes leadership to put yourself out there so others can benefit from your journey.

To our present and past panelists, Patrick, Jeff, Mike, Elijah, Gloria, Mark, Carrie, George, Joe and Janis, my hat off to you. We salute your leadership.

Many more things can be said about the month of April. The journey continues, and with it transformation