During Google Cloud Next ´17, Diane Greene, SVP Google Cloud, and Bernd Leukert, Member of the Executive Board SAP SE, announced a strategic co-innovation partnership between Google and SAP. In Bernd’s keynote at SAPPHIRE NOW 2017, Bernd Leukert and Diane Green explained the many ways in which our two organizations are extending and expanding this strategic partnership.

What is SAP Leonardo IoT?

SAP Leonardo IoT offers a range of packaged enterprise end-to-end solutions for connecting things with people and process with real-time intelligence – across line-of-business and industry use cases.

These end-to-end solutions are built on a technology foundation that enables SAP, our customers and partners to build IoT solutions leveraging a consistent framework.

Details on the GCP integration

To get the most out of the combined Google / SAP offering, the intention is to integrate at a very deep technical level. Especially around networking, data distribution and processing SAP aims to utilize the many strengths of the GCP platform. As an example, SAP Leonardo IoT will utilize GCP’s Cloud Pub/Sub technology to ensure massive throughput and world-wide distribution of IoT data. Combined with SAP’s data management solutions around SAP HANA and SAP Vora this will result in a highly effective offering for partners and customers.

SAP is following a multi-cloud strategy allowing partners and customers to run their scenarios on GCP (Google), AWS (Amazon), Azure (Microsoft), or SAP’s own data centers, and in selected private cloud scenarios. Also, SAP Leonardo IoT fully supports this approach and will be available in all environments. This includes a very rich and effective integration in GCP and enable the usage of Google capabilities like e.g. GSuite and Google Maps.

To showcase the current integration efforts, two scenarios were shown at SAPPHIRE NOW.

A cooler was connected to the SAP Cloud Platform leveraging the embedded device management capabilities. The sensor data was ingested into GCP Cloud Pub/Sub and from there written into SAP’s big data storage for time series data. Finally, the device was shown on Google Maps and the data was visualized using the SAP Leonardo IoT Foundation reuse services and reuse controls.

SAP Vora is SAP’s in-memory, distributed computing solution for big data. It is planned that SAP Vora will be deployed into GCP’s Google Container Engine by leveraging Kubernetes. In addition, there will be full governance and lifecycle management for end to end scenarios.

For the demo, we stored a huge amount of IoT time series data in GCP that was processed by SAP Vora.

As outlined before, SAP is intending to integrate more deeply with GCP components. Let me explain that in the context of our data ingestion pipeline. 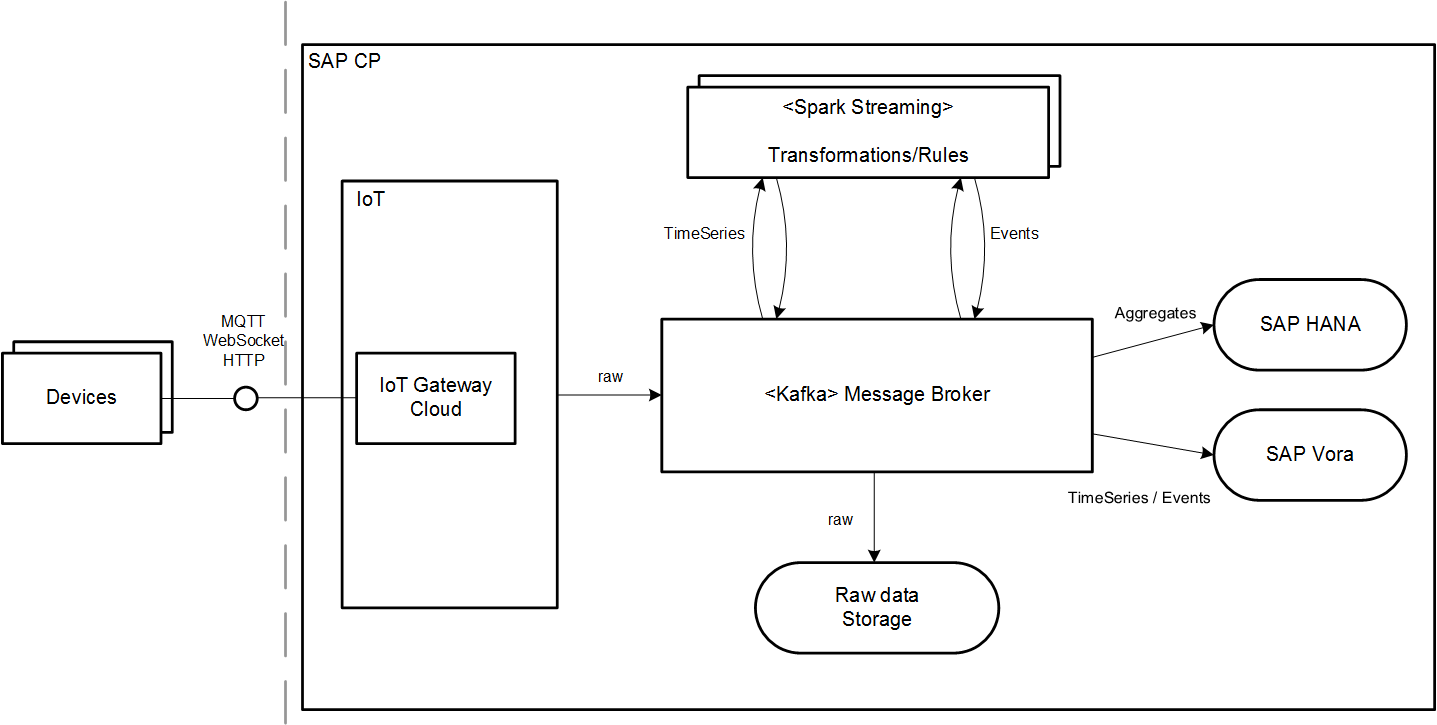 This is our current ingestion pipeline. All the components are embedded into the SAP Cloud Platform that runs on our own SAP data centers, but also IaaS cloud providers. Devices are connected to our platform through SAP Cloud Platform Internet of Things. The raw data is written to Kafka. From there we put the raw data into the IaaS specific object storage component (e.g. S3 on AWS). The time series data is transformed by Spark Streaming Jobs. It is then stored in SAP Vora and aggregates these time series data in SAP HANA. Applications can access this data in a homogenous approach via SAP HANA – shielding whether the data is served directly by SAP HANA or the attached SAP Vora solution.

For the GCP optimized data ingestion pipeline we intend to optimize several components. As an additional device connectivity channel, we evaluate to use the Google IoT component. Instead of Kafka, we write the data into Google Cloud Pub/Sub and the raw data is stored in GCP’s cloud storage. All remaining SAP components will run in the SAP Cloud Platform that is also provisioned on GCP. With that, we will utilize the technical scale of the GCP platform and still ensure movability of the application code as defined by our multi-cloud strategy.

Further information can be found at:

Thank you for providing inputs!