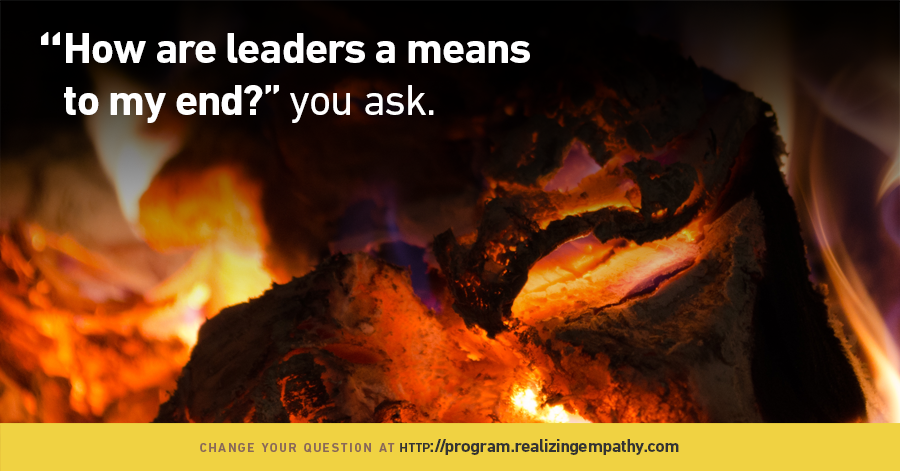 It took me about twenty five years before I started to perceive my mother as a human being.

I’m going to go out on a limb and claim that I’m not alone.

“Then how do we perceive them?” you may ask.

As a means to our end.

As a teenager, I often perceived my mother as a means to permission, money, and food. She was the means to me going out with my friends, buying things I wanted, or eating breakfast, dinner, and sometimes even lunch.

Of course, I intellectually understood that I should feel gratitude towards her for giving birth to me and for raising me. Unfortunately, those were rarely visceral experiences. So most of the times, I perceived her as mere means to my end.

The same holds true in our perception of our leaders.

I was once an employee myself. In some ways, I still am to the CEOs I coach. I have also spent a significant amount of time listening to employees inside organizations as their meta-designer. In this journey, I’ve noticed at least three inter-related lenses through which we perceive our leaders as mere means to our ends.

1. As a means to our survival: “I joined this company, because I need financial security. I keep my leader happy to meet this need.”

2. As a means to achieving our goal: “I joined this company to make cool things that make an impact in the world. The leader will help me achieve that goal.”

Instead of judging these lenses as good/bad or right/wrong, I want to highlight how they give rise to misunderstandings inside organizations.

1. So long as we perceive our leaders as an object of authority, we’re likely to interpret their suggestions as promoting compliance. If we end up feeling repulsed by these interpretations, we’re also likely to distance ourselves from our leaders.

2. So long as we perceive our leaders as an object of our aid or obstacle, we’re likely to interpret their decisions as short-sighted and selfish.

3. So long as we perceive our leaders as an object to be copied or rebelled against, we’re likely to interpret their communication efforts as a form of indoctrination.

Once again, instead of judging right/wrong or good/bad, I want us to recognize that these misunderstandings are born out of the inherent difficulties of seeing through the eyes of others. It’s too simplistic to judge them as a result of poor leadership.

It’s true that some less experienced leaders try so hard to be equal that they have more trouble seeing themselves as their team members see them. At the same time, experienced leaders can also have the same blind spots. What’s important to note is that we can all develop the skills required to better prepare for and manage these blind spots by learning to realize our empathy.

Now that I’m in my 40s, I find that things have changed since I was 25. I am more likely to perceive my mother as beyond mere means to my end. I also interact with her in ways that are mutually empathic. Is it perfect? No. I’m happy that it is simply possible.

It all started with noticing myself shaming or blaming my mother, then gradually learning to choose a different set of contexts with which to interpret her words and behaviors.

Are we also willing to do the same with our leaders?

Some are. Some are not. For those willing, here’s a question you can ask yourself to get started.

“If I were unafraid of getting fired or judged, and wanted to use all the creativity and critical thinking I had to help the leader clarify and achieve the organization’s goals instead of my own, what would be the smallest next step I need to take?”

To be clear, you may say you’d rather leave the company. That is your choice. I just hope you’ll choose a better alternative than staying stuck shaming or blaming your leader. That isn’t helping anybody. As the saying goes…

“Holding on to resentment is like grasping a hot coal with the intent of throwing it at someone else.”

May you let go of the hot coal.