openSAP Course: Touch IoT with SAP Leonardo, Play with the Internet of Things and Win Prizes 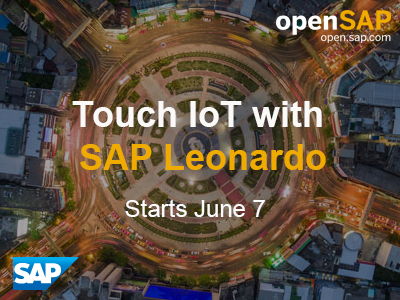 We’re happy to announce that a new free openSAP course will start on June 7, and it’s called Touch IoT with SAP Leonardo. For those keeping score at home, the first version of this course (“Imagine IoT“), held last year, resulted in over 1,300 IoT prototypes created by YOU, the SAP community.

So what’s new for this course? In short, tons of stuff, here’s a quick list:

The course has been designed for those who participated in the previous course AND for you newcomers as well. There are no prerequisites, everyone is welcome to join, and you can sign up here.

Also, for any of you attending Sapphire 2017 next week in Orlando, stop by the SAP Leonardo IoT Solutions booth (BA353) and say hi, learn more about this course, and/or see some cool IoT demos. Hope to see you soon, either in person or virtually!